Today, drones are quickly increasing in numbers and complexity, and becoming a part of our everyday lives. Earlier this year, the FAA released its forecast for the next two decades, noting that the market for commercial drones is growing faster than anticipated, and could triple between now and 2023, while the market for non-commercial drones appears to be slowing. On December 10th, 2019, the FAA announced a total of 1,509,617 drones registered in the United States, 420,340 commercial and 1,085,392 recreational drones.

While flying drones can be a fun hobby, and one of the reasons they’re sought by many during the Christmas holiday, the commercial use of drones is why the industry is growing so much and so fast. From creating 3D models of construction sites, to analyzing and determining crop health, drones not only bring efficiency and productivity advantages to various businesses, but also security and safety.

What is commercial drone use?

Commercial drone vs recreational drone use

What to consider before buying a commercial drone

Getting a drone pilot license for commercial use

What Is Commercial Drone Use?

Commercial Drone Vs. Recreational Drone Use

Drones are tools that offer the potential to reimagine some of the most critical ways humanity operates. As previously mentioned, drones are helping various industries to become safer, as well as more efficient, productive, and secure, including Agriculture, Construction, Public Safety & Emergency Services, Mining, Surveying, and more.

Here are some examples:

As global food production demand grows exponentially, resources are depleted, farmland is reduced, and agricultural labor is increasingly in short supply, success expectancies for the agricultural drone and robotics industry are high.

While the agriculture industry has been slow to adopt drone technology, there’s a wide variety of use cases where the use of drones makes a significant difference. For example, Rantizo is using drones to spray agricultural fields. Also, when paired with real-time mapping data from LiveMap through DroneDeploy, DJI’s P4 Multispectral Drone allows farmers to walk over to examine trouble spots while the drones are still in the air.

Recently, we spoke with Greg Crutsinger (PhD), the founder of Scholar Farms, to get his 2020 predictions about climate change, how the conversations about drones are changing, where there is money to be made in precision agriculture with drones, and more.

The construction industry is taking great advantage of drone technology, by using them to collect real-time data about projects and understand what’s happening on site. Aside from providing hourly, weekly, or monthly information about a site, drones also increase safety, save time and resources, since aerial insights help catch problems early before they become costly or add weeks to a project’s timeline.

While not specific to construction sites only, solutions such as the Airobotics “Drone in a Box”, or Skydio 2 Dock are further improving the use of drones by automating the whole mapping process.

In 2018, the Menlo Park Fire District helped to assess, map and document affected areas after the Carr Fire. The Fire District continues to actively use drone technology, and beyond prevention of forest fires, Menlo Park is also using drones to aid in the development of the region.

During 2019, there was a significant growth within emergency response services with 75% of public safety agencies pursuing UAS programs. DRONERESPONDERS is one of the responsible agencies for this growth, with over 300 public safety documents (SOPs, best practices, lessons learned, program guides, task books, checklists and more on its website).

For more use cases, industry overviews and/or insights from industry experts, please read our reports about commercial drones in North America and Europe.

What to Consider Before Buying a Commercial Drone

Before diving into the “Which drone is the best?” question, figuring out what problem the company or individual is trying to solve is the first step. Then, choosing the right drone for the job is an important step, as it will most likely define the range of applications a company or individual has access to.

Nowadays, commercial drones start around as low as $2,000 and can go as high as multiple $100 000. This difference in price comes from many factors: the camera and sensors embedded on the drone (the payload)—one of the most crucial, since those will provide you the data you need; the overall flight performances (speed, wind resistance, battery life); the materials used to manufacture them; and their technical abilities such as flying partially autonomously or being able to sustain collisions.

Sometimes, “a simple yet reliable quadcopter weighing in under 4 pounds with a 20-megapixel sensor can get the job done, there’s no need to increase the risk by using a 10-pound hexacopter with removable payload—and steeper learning curve,” said Diego Barrera, director of professional services for Skyward.

While a “Top Commercial Drones” list is somewhat subjective, these are some good starting drone picks for consideration for different applications: 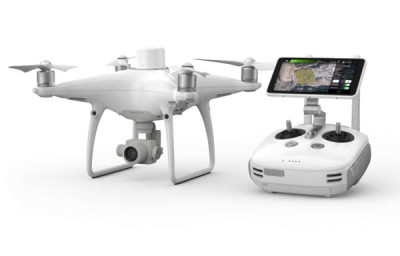 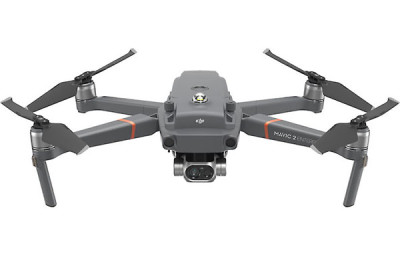 The ultra-compact and foldable design of the Mavic 2 Enterprise will help extend users’ capabilities during critical operations like firefighting, emergency response, law enforcement, and infrastructure inspections. The DJI Mavic 2 can fly for 30 minutes, and also has enhanced data security features and the ability to improve pilots’ situational awareness. 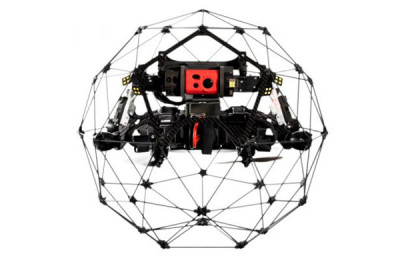 Flyability’s Elios 2 design makes it easier for pilots to maneuver in confined spaces, such as mines or indoor locations. This is an intuitive-to-fly drone fitted with an unobstructed 4K camera that can hover in place to spot sub-millimeter cracks. It performs reliably in GPS denied environment, in dark, dusty and troubled airflows, beyond line of sight, and particularly in places that no other drone can access. The Elios 2 features a 10-minute flight time only. 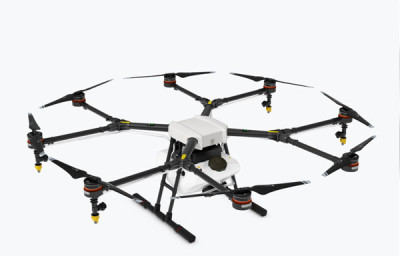 Apart from the previously mentioned DJI P4 Multispectral, the Agras MG-1 was also designed with agriculture in mind. The drone can carry up to around 22 pounds of liquid payloads, including pesticides and fertilizers. In just 10 minutes, the Agras can cover an area of 4,000–6,000 m², which is 40 to 60 times faster than manual spraying operations. The intelligent spraying system automatically adjusts its spray according to the flying speed so that an even spray is always applied. This way, the amount of pesticide or fertilizer is precisely regulated to avoid pollution and economize operations. 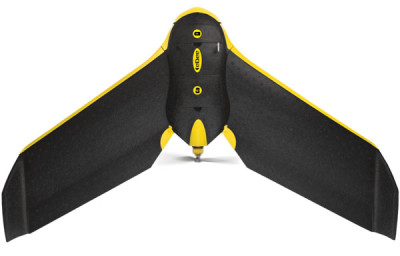 The eBee X is a fixed-wing drone that can cover up to 40 km2 (16 mi2) in a single automated mapping flight, while flights over smaller areas, at lower altitudes, can acquire images with a ground sampling distance of down to 1 cm (0.4 in) per pixel.

Acquiring a drone for commercial use isn’t as simple as buying and flying one. Although still in constant change as drone technology moves forward and evolves, laws and regulations are already in place for pilots to comply with.

In the United States, to become eligible to fly as a commercial drone operator, new pilots will have to follow FAA's Small UAS Rule (Part 107) and obtain a Remote Pilot Certificate.

Flying a drone for fun in your backyard may be simple, but flying a commercial drone for business requires you to take in a lot more information. Sometimes, studying and understanding all these new rules, information and concepts by yourself can be a daunting experience.

Drone Pilot Ground School and UAV Coach are two examples of institutions across the world who chose to provide drone training programs to help pilots to acquire a drone pilot license. Some companies are combining drones with other technologies, like DronOSS, which uses Augmented Reality to redefine training technology.

Getting a Drone Pilot License for Commercial Use

In 2016, the FAA's Small UAS Rule, or Part 107, introduced the guidelines needed to ensure safe drone flying operations. For any pilots flying a small drone that is less than 55 pounds, flying for work or business is allowed by following three main steps.

To learn the rules is FAA’s first requirement, and it’s important to note that although your drone may fit these rules, some operations are not covered by Part 107 and will require a waiver.

The next step is to become an FAA-Certified drone pilot by passing the knowledge test. For this, a pilot needs to be at least 16 years old; be able to read, write, speak, and understand English; and be in a physical and mental condition to safely fly a UAS.

Finally, after passing the knowledge test, comes the registration of your drone with the FAA. This costs $5 and is valid for 3 years.

In Europe, drone rules differ from country to country, so it’s advised to consult the country’s regulations before thinking about flying a drone, even if you own a license from another country. However, the European Union Aviation Safety Agency (EASA) published the Commission Delegated Regulation (EU) 2019/945 and Commission Implementing Regulation (EU) 2019/947 was created to ensure drone operations across Europe are safe and secure. As of June 2020, Europe will be the first region to allow pilots to operate their drones seamlessly when traveling across the EU or when developing a business involving drones around Europe.