In the past decade, the US has had about 67,000 wildfires annually with an average of 7 million acres burned each year. In 2018, 8.8 million acres were burned in wildfires. But thanks to today’s technology, fire officials in one California community are quickly responding to such threats with drones.

In Menlo Park, California, emergency responders are getting a lot of mileage out of drones. And nobody’s complaining in the community of 90,000, since, unlike many other municipalities around the country, Menlo Park folk really like technology.

Begun three years ago, the Menlo Park Fire Protection District’s drone program was initiated by one of the organization’s battalion chiefs. He’d seen a drone in action at a friend’s house during a gathering, and he brought the idea to the fire district leaders. The department bought a few DJI drones to try out the technology in emergencies.

“We got them to serve as eyes in the sky during emergency situations,” said Menlo Park Fire Marshal Jon Johnson. “It allows us to fly for emergencies and for training. Its first use was for search and rescue in the bay.”

According to Johnson, the organization was the first to get FAA certification to fly in emergencies. They are also licensed to train their employees to use drones. It has made a big difference in the department’s operations.

“We can do searches in the bay quickly because the drones are equipped with thermal sensors. We can do a search in ten minutes rather than taking an hour to do it by boat,” Johnson said, adding that the sensors were adopted by the department two years ago. “The organization has found more than one deceased bridge-jumper, since beginning to use drones for searches.”

The organization’s fire board has been very supportive of the program partly because of the efficiency of the technology. Rather than searching for bridge-jumpers from a boat, which takes a lot of manpower and time to do, the department can now search a large area with a drone.

“It’s a lot cheaper to use the drones for a search, you get information and the drone back quickly, and it’s also helpful in the case of inspecting sites with hazardous material issues, such as in the case of a toxic plume of smoke from a fire,” Johnson explained. “Last year, we sent drones to all three of our big fires.”

In such emergency scenarios, the drones help by providing accurate maps for search and rescue, capturing images of where the fire is heading and predicting where it will go next, as well as providing up to date info on the fire for news organizations and the public. Even after the damage is done, Menlo Park officials use their drones to help map the destruction wrought by the fires. Such documentation helps with insurance and FEMA claims after such devastation.

With the aid of consultants, the department also plans to use drones for fire prevention in areas of Menlo Park at the so-called Wildland Urban Interface, an area where wildlands abut developed, inhabited areas. By using drones equipped with sensors, they can determine not only the types of vegetation growing in an area, but also the moisture content of the vegetation.  In this way, they use drones in a preventative mode by reviewing the vegetation data they collect and assessing the plant health and fire risk of such areas. 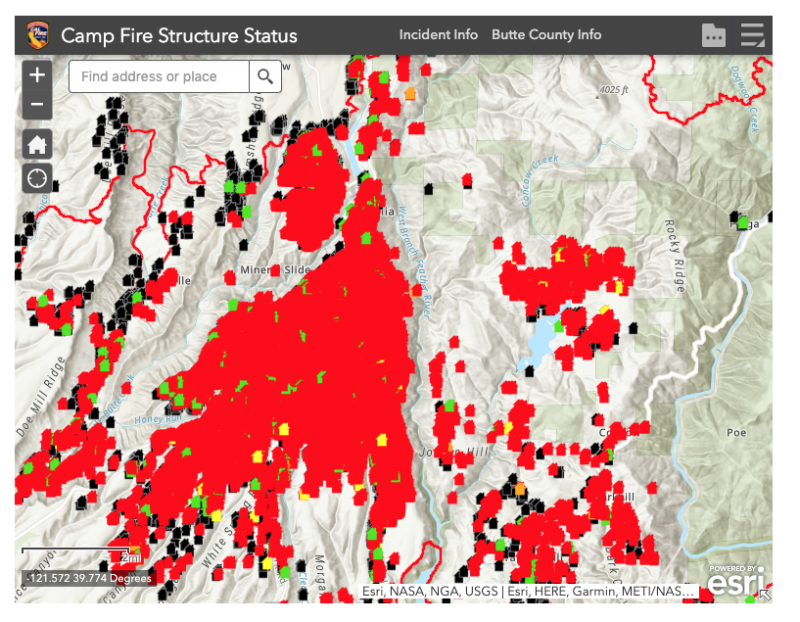 Menlo Park Fire Protection District is not yet using data gathered by drone for longer term analysis, but their leadership plans to do so.

“We’re still in the analysis phase [of the drone program],” Johnson explained. “We are determining the frequency of use of their drones, the type of info they are gathering with the drones, the cost of the program, its efficiency, the savings obtained through drones, and obtaining good documentation with the drones.”

Beyond the prevention of forest fires, Menlo Park is using drones to aid in the development of the region. Contractors in the area are getting a hand in planning their developments by using drones over constructions sites, for pre-planning of emergency access, and for roof inspections.

What Lessons Did Drone Imagery Provide from the 2017 and 2018 California Wildfires?