As a result of the COVID-19 pandemic, there have been many reports of grassroots efforts utilizing agricultural spray drones for the sanitation of public spaces, especially in China. But because these have been emergency-type efforts mobilized in response to the pandemic, there is little data about how effective these measures are, what risks are involved, and whether or not it is a cost-effective way to combat the virus. This is all information that public agencies, corporations, and sanitation workers will need if we are to see widespread adoption in the west. Despite the lack of data, there are compelling reasons to consider drones as an effective decontamination tool. 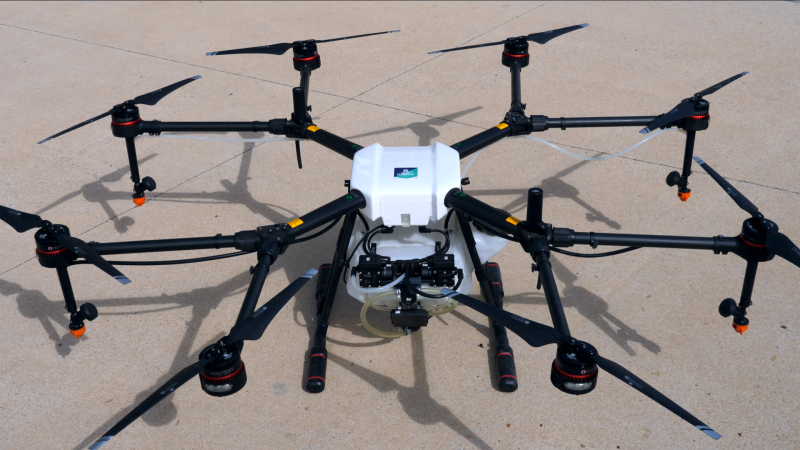 Spray drones have been used in precision agriculture for a number of years. Compared to manually spraying an area, a spray drone can cover somewhere between 5.3 to 5.8 hectares an hour, which is essentially 6,000 square meters every ten minutes. Perhaps more importantly, they are also designed to be very effective at covering and soaking the areas they cover, which is paramount to protecting crops and killing infestations. The scale of the area that can be covered, the effectiveness at which it is covered, and the speed at which that area can be canvased has definite applications for fighting the pandemic on a global scale.

According to the CDC, the virus is mainly transmitted via respiratory droplets or by touching contaminated surfaces. Because drones spray from a height and are designed to soak/saturate surfaces, they can potentially disinfect both. Although more testing will be needed to verify the efficacy of just how well surfaces and air are disinfected, the empirical evidence alone suggests they could be a powerful instrument in the fight against the spread of the virus, especially in larger spaces like public walkways, public arenas and stadiums, shopping centers, truck bays, loading docks, vehicles, hospitals, and so on.

So, what are the current roadblocks toward adopting drones for sanitation? According to Paul New and Dr. Joel Spencer, Co-Founders of the Institute for Drone Technology, there are several hurdles we will need to overcome in order to implement something like this to scale.

First, systematic testing of this technology and the standardization of procedures required for large scale global deployment in the west will need to be developed to ensure safety and repeatable results. Public agencies are not going to adopt untested and unproven technology; there is just too much risk involved. Furthermore, the stakeholders who would likely deploy these methods would need to buy-in to the potential of the technology and adopt it. According to New and Dr. Spencer, the sanitation industry is not currently aware of the capabilities and functions of drones, so a major part of this equation is building a case for ROI and education. And finally, there will need to be an infrastructure and methodology in place for widespread deployment—production of spray drones would have to ramp up, drone pilots would have to be trained and reallocated to this project, and funds would have to be put aside to support these efforts. In short, it is not a matter of whether drones can be deployed to do this task, it is a matter of having the resources, adopting the technology, SOP development, and building awareness/buy-in.

Determining the key aspects of the sanitation process (SOP), building the resources, and bringing the right stakeholders into the conversation in order to deploy sanitation drones at scale is where The Institute for Drone Technology in Australia has stepped in. New and Dr. Spencer spoke to Commercial UAV News about this new emerging market for drones and how they are currently testing (see the video below), developing procedures, and generating support for using drones in sanitation efforts.

“One of the worst things that could happen, other than choosing not to use drones at all, is that people all rush out and start using these drones in an unstructured way, without training, without standard operating procedures,” explained Dr. Spencer. “If we can build those standard operating procedures now in real-world environments with actual testing around stadiums and warehouses and other environments, it will be able to scale much faster in a sustainable and safe way.”

Dr. Spencer and New emphasized that they are looking at the development of sanitation procedures with drones as a long-term investment for their stakeholders. They see this as more than a temporary crisis management stop gap, but as a potential new market and source of revenue for the drone industry.

“One of the key things we found out when talking to clients was that a lot of their response plans were built around ramping up manpower, which is strange because the pandemic effectively takes out manpower,” began New. “What we are trying to do is not only encourage adoption of drones for sanitation, because they are more efficient and safe, but also ensure that standards, licenses, and the foundations that have been laid out in the drone industry aren’t thrown out the door just because there is a crisis, which is likely what happened in China. One of the key conversations we’ve had with stakeholders is that this is not a sprint, this is not a middle distance, this is a marathon. This technology will be deployed on an ongoing basis, cleaning many large sites like truck bays, open spaces and arenas, and warehouses and so on for the foreseeable future as part of a new paradigm in cleaning regimes.” 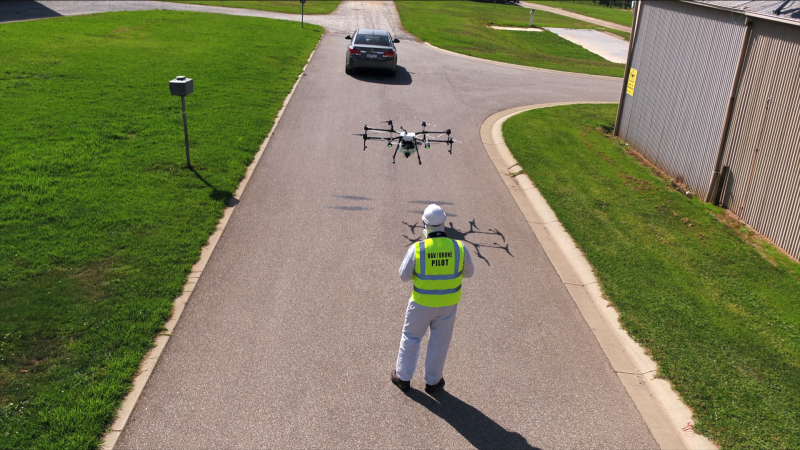 The success of adoption ultimately comes down to building awareness of the capabilities of the drones and making a case for return on investment (ROI) for stakeholders. Both Dr. Spencer and New believe that a drone that can efficiently cover a large area of space semi-autonomously without exposing humans to contaminants has a clear ROI.

“People are vulnerable in these environments,” said Dr. Spencer. “It all goes back to the three D’s this kind of work is dull, dirty, and dangerous. For instance, cleaning large areas of a loading dock, warehouse or truck is dull, it is dirty, and it is downright dangerous when talking about a pandemic. Drones require less manpower. And in a pandemic, where we are potentially looking at large numbers of the population becoming sick and unable to work, we are going to need drones to not only multiply what a single person can do, but also keep people safe and away from contaminated surfaces and spaces to prevent further illness.”

Essentially, the ability to mobilize drones to sanitize and clean large spaces on a regular basis will ensure a new level of safety and sanitization that, if done manually, would take hours or even days and put people at further risk of coming in contact with diseases. Because drones can be automated to do these jobs at regular intervals, it becomes less a matter of manpower and more a matter of determining what the efficient frequency of sanitation should be. This could be a game changer in a world that has just awoken to realize how vulnerable it is to contagion at a global scale. 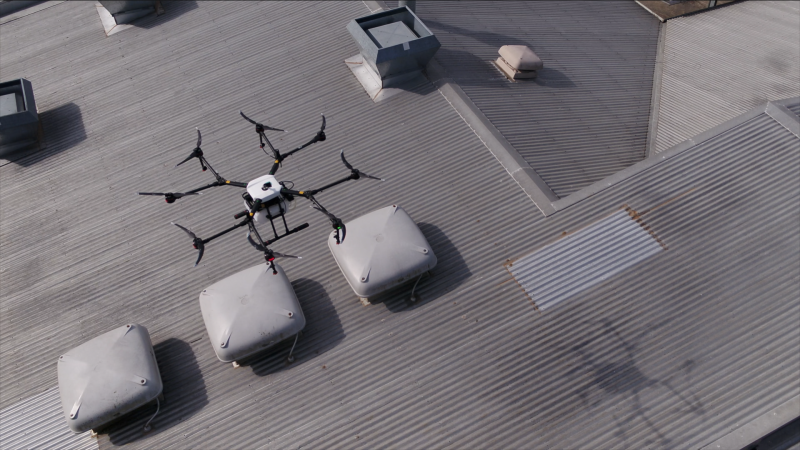 “How we interact and how we move is going to be disjointed, it is going to be very different for the next couple of years,” concluded New. “We think this is the perfect storm to create a step change in the industry—to jump from cottage industry to business as usual where people understand the value of drones. We are going to be operating at half our strength, and our regulators are already operating at half their strength. Ultimately, recognized, structured organizations will have to step in to bridge that gap to provide operational capability to the agencies, governments, and corporations that have to stay open to provide food, healthcare, and other essential services. Drones can serve the public and keep these people working and keep drone pilots and services employed during this crisis.”

To learn more about what Paul New has to say about the future of drones in light of the COVID-19 pandemic, you can sign up for Commercial UAV News’ upcoming Webinar, How Will COVID-19 Impact the Present and Future of the Drone Industry?, on April 28th, 11:00 AM to 12:00 PM EST.

Airobotics Gets BVLOS Waiver from FAA During Covid-19 within 24-Hours: Here's How

DSPs Become ESP in the Pandemic and Beyond

This Week in Drones: Drones Are Still Flying