Moving at the Speed of an Emergency with Drones

We’ve talked about the gap that exists between drone technology and practical adoption for emergency response professionals, but it’s a gap that numerous officials are intent on closing. Proof of that was evident at a recent plane crash site in Winchester, N.H., where a pair of drones helped collect info to determine where best to conduct the search for a missing aircraft. 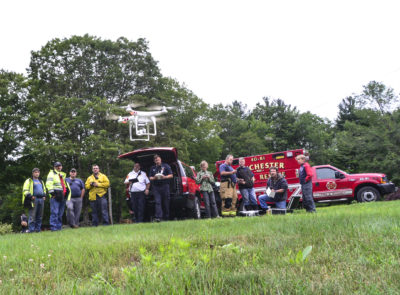 Keene, N.H., Fire Department Lt. Raymond Phillips launches a DJI Phantom 3 Drone on Curtis Road, in Winchester, N.H., to help with the search of a missing aircraft on Thursday, July 13, 2017. Special thanks to Kristopher Radder of the Brattleboro Reformer, who took the photos that appear in this article and gave permission to use them.

Lt. Aaron Cooper and Lt. Raymond Phillips of the Keene, N.H. Fire Department were among the emergency personnel that came to the area to assist with search efforts, and they were able to use a drone to rule out a considerable area of suspicion that lessened the ground forces of area that had to be checked. It’s just the start of how their department is looking to utilize the technology though, which is a topic they’re set to further explore at an upcoming development & training program that offers hands-on flight instruction.Their work in this area could create a model that other departments throughout the region and country are able to emulate. Building a ProgramThe Keene Fire Department is currently in the process of developing a drone program, but doing so is complicated by the technical and financial details that are a necessary part of adoption. The Keene Fire Department is currently writing what will end up being a 10 page policy, and they are the only career department in their area with those kinds of resources. These officials find that investment of their resources to be worthwhile though, because they understand the differences these tools can make in emergency situations.“About 18 months ago we had a significant brushfire, and I waited four hours for a state aircraft,” said Chief Mark Howard of the Keene Fire Department. “Four hours was too late, and the incident turned into a 24 hour operation, and we ended up needing three aircrafts to suppress the fire. That incident got worse than it should have been because we didn't have a good grasp of what was happening with details like the direction of travel, and a drone would have given us that info in minutes. If we had the drone they took out on that crash, just by going vertical from the command post, we would been in a much better position.”Officials like Chief Howard are actively exploring the technology not just because of the situational awareness capabilities they know UAVs can provide, but also because of how quickly they can provide those details. Moving at the speed of an emergency is critical not just in the sense of being able to save lives and mitigate damage, but also because of the literal expense associated with not doing so. The time and cost that would have gone into getting a helicopter involved with the aforementioned search for a missing plane are far greater the ones that went into using a drone.Additionally, the rural and off-road areas that Keene officials deal with have forced them to consider alternatives to their standard approach in order to ensure they’re able to assess and approach a variety of emergency situations. They don’t want to be at the mercy of resources that don’t move as fast as they require. Doing so in a safe and responsible manner is extremely important though, especially in light of the approach taken by members of the public and even officials in other departments. 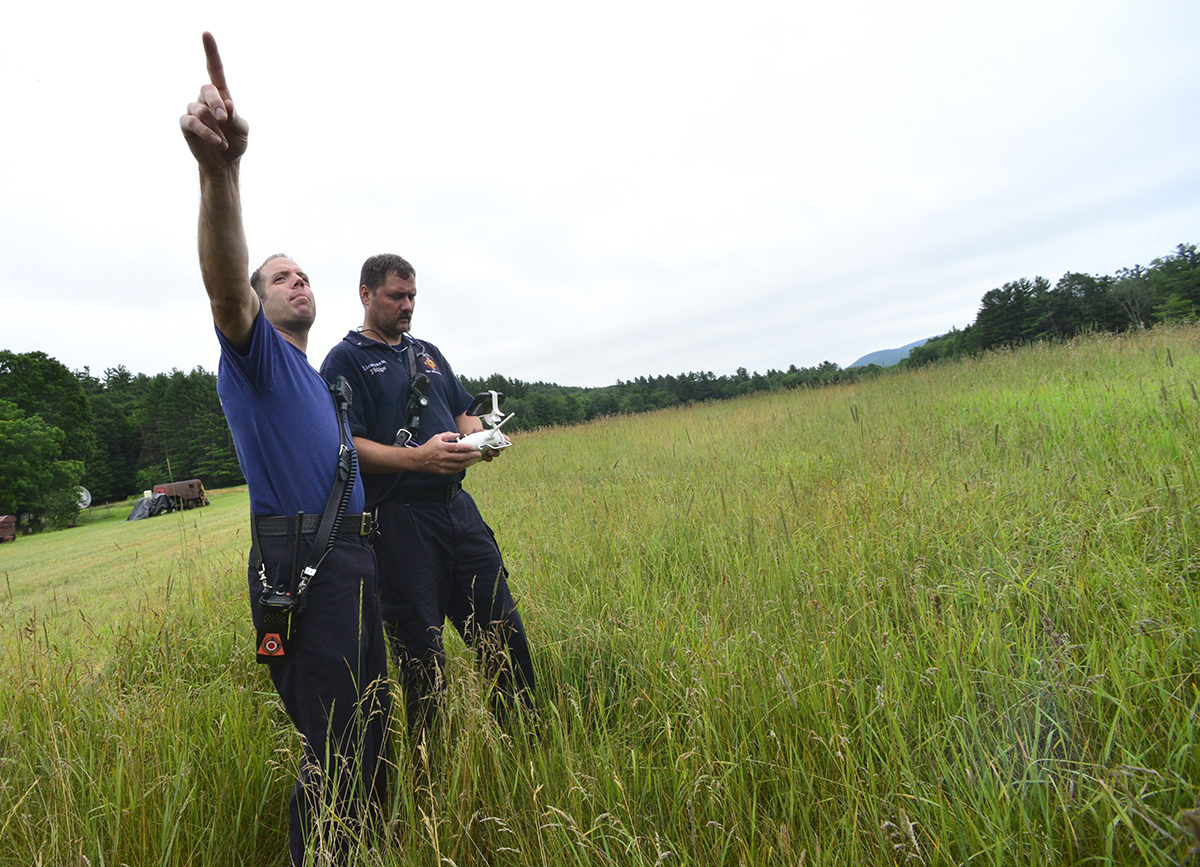 Educating Officials and the PublicNegative feedback from the public provides one of the most challenging aspects for safety officials around building a drone program. Citizens often express privacy concerns about drones being used by public officials, regardless of how these tools are actually being used. That kind of feedback is becoming less and less of an issue as the technology becomes more pervasive, but acceptance of the technology at this level can open up additional challenges. “Anybody can go down to a big box store and buy a drone,” said Chief Howard. “We want and need to hold the public accountable for what they do with their drone, but we also need them to know we’re using these tools responsibly. Being held accountable around what we are and aren’t doing with drones is just part of the reason we have to layout a plan for this program.”That kind of plan is associated with securing a Part 107 certificate, and Keene officials mentioned how essential that training was for them. The insights they gathered after going through the training had very little to do with actually flying a drone, but instead were focused on what it meant to fly safely with a drone. It’s the kind of training that will help others realize self-dispatching is not a viable option.While some members of the public still have privacy concerns when public officials utilize this technology, it’s the public’s use of hobbyist drones that might present an even bigger challenge. The Keene Fire Department has already dealt with issues from hobbyists who are flying their drones in emergency situations. The “Know Before You Fly” campaign is designed to educate the public around what can happen when they take a drone into an emergency situation, and the issues are complicated by the fact that it can be difficult to tell who is who in these situations.“When people see the drone in the air they don't know whether it's the fire department or a private citizen,” said Lt. Philips. “We might have to paint ours red!” 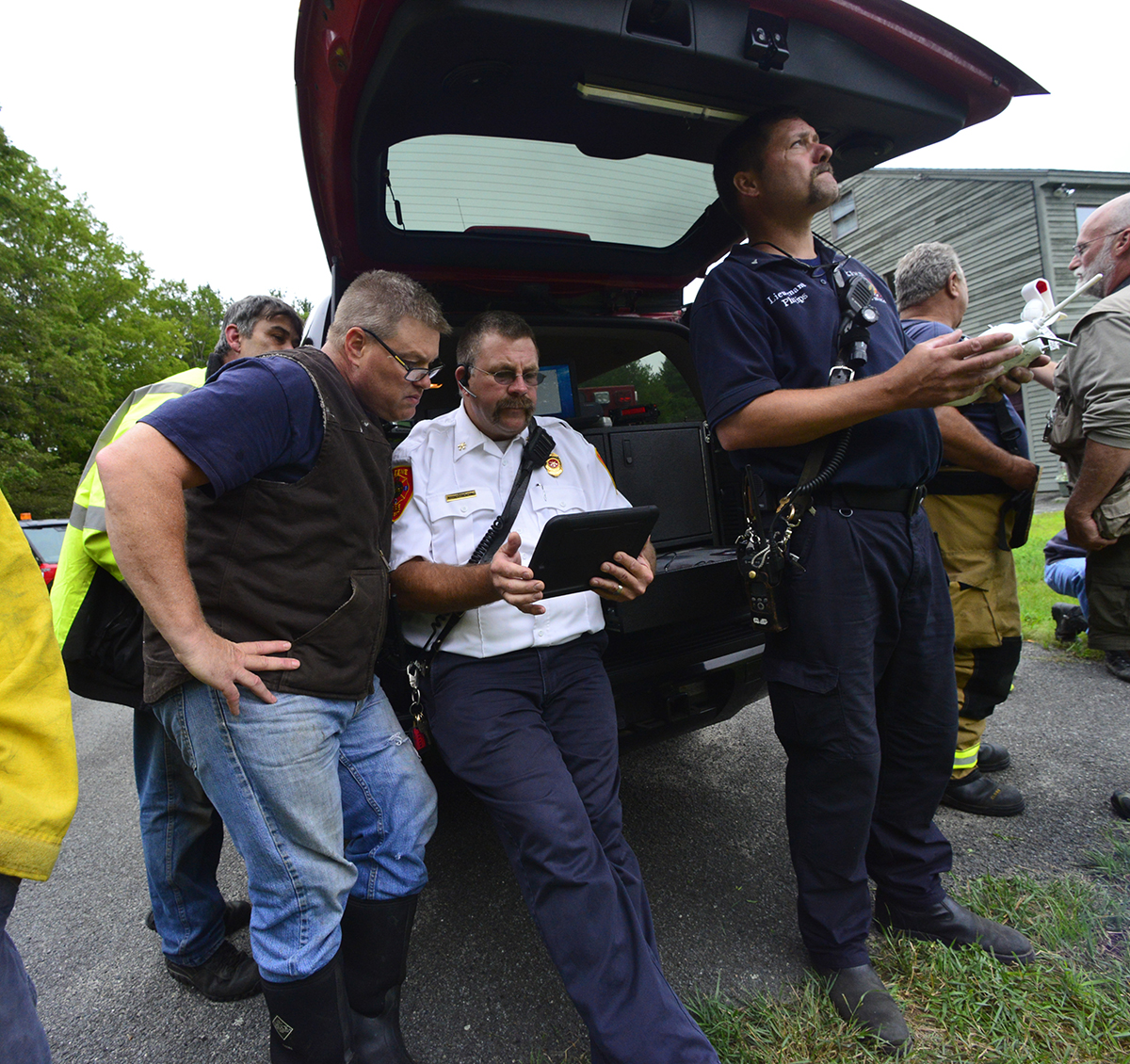 “Oh, You Don’t Have a Drone?”While the Keene Fire Department doesn’t have a “department” drone yet, they are actively investigating what products and technologies will be the best fit for them, which means everything from getting their hands on demo products to attending industry events. Cost will always be a major consideration for public officials, but it’s a topic that they’re considering from several angles.“The reality is, firefighters break stuff,” said Lt. Cooper. “We lose stuff. We're looking into the details of what one brand has over another, and also the expenses that are associated with details like training.”The logistics associated with getting a program up and running can be a challenge, but the opportunities that doing so open up are essential. Keene is centrally located in Cheshire County, and as such, they need to be able to handle a variety of situations while also offering assistance to other cities when needed. If there’s something they can’t handle, help might not arrive for a number of hours. It makes the importance of being able to utilize UAVs safely and responsibly that much more important to them and to their constituents.It might seem like a complicated process, but there’s a parallel with another piece of technology that officials in this part of the country are very familiar with. All-terrain vehicles (ATVs) around the New England area were unheard of twenty years ago. By and large, departments simply didn’t have these vehicles, but once they started being explored in terms of how they could help with off-road emergencies, brushfires, etc. it was only a matter of time before they became widely adopted.The same cycle could happen with drones. It wasn’t that long ago that the Keene Fire Department was the only one that had an ATV, but now everyone has them. When and how will that transition with drones take place though?“My prediction is that in less than five years it's going to be expected that a department will have one,” Chief Howard concluded. "The reaction to someone not having one will be, ‘oh, you don't have a drone?’ Granted, it's not going to work for every department, but you'll get an odd look if you don't have one. I think they'll be that popular.” 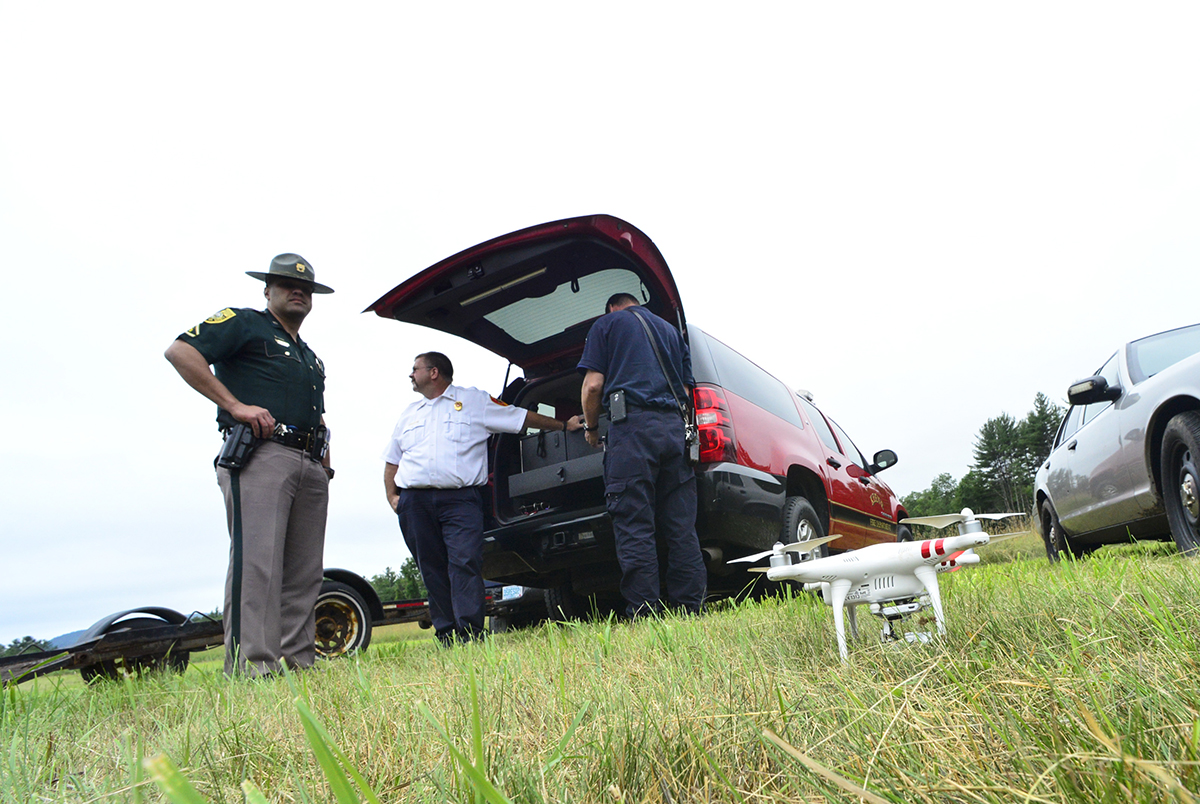