Commercial UAV News has often discussed that the success of a drone solution is often more about understanding a problem and providing a solution than about having a technology in search of a problem. This has been especially true for public safety departments whose needs are very specific and are often constrained by financial and legal considerations. Yet, the use cases for public safety are only growing with much tied to how they are able to save lives, property, and valuable time.

Evolve Dynamics, a UK drone company, saw this need about six years ago for an affordable purpose-built public safety drone. Many of the drones in the market were unable to meet the needs of the emergency service agencies in the UK; they were either too expensive, unreliable, or lacked the capabilities at the desired price point. So, Michael Dewhirst, Founder of Evolve Dynamics, met with public safety agencies to find out exactly what was needed. From those initial conversations, the Sky Mantis was born.

“In the UK, agencies really wanted something that was built for UK weather, which is absolutely miserable” explained Dean Attridge, Head of Business at Evolve Dynamics.

“The Sky Mantis is waterproof with an IP 55 rating and has been tested in up to 47 mile an hour winds—that is miserable horizontal soaked to the skin weather!  It has an hour’s endurance, which is about to go up by about 10%. It carries both a 30x Optical Zoom Camera and a thermal imager and is able to deploy quickly in about 1 minute.”

“Another important factor is affordability and scalability,” added Dewhirst. “From the outset we were looking at how we could make something that would be scalable. At high volumes, you need to be able to produce your product with a fairly low skill set — you can’t rely on high-end electronic engineers to put each unit together by hand, so we carried out a lot of what’s known as DFM (design for manufacturing) to ensure our system would be scalable and at the price-point required.”

These specifications, along with its reliability and affordability for the UK emergency services market, earned them a solid reputation, which enabled them to gain a sizeable chunk of the industry in the UK and other global markets.

Now Evolve Dynamics has entered the North American market to bring their purpose-built solution to American emergency service agencies and commercial enterprises. Commercial UAV News spoke with Dewhirst and Attridge about what circumstances led them to make the jump across the pond, how emergency service agencies are different from the UK, adjusting to regulations and laws, and much more.

Question: What were the circumstances that led Evolve Dynamics to decide this was the right time to enter the North American market?

Answer: “For a while, the opportunities in the UK have been a little stronger. One of the factors for this is that the primary customers for the Sky Mantis in the UK were having some negative experiences with Chinese-made cheaper drones and non-Chinese but very expensive ones – and this was starting to happen in the US. These same companies have had a very strong market presence in the US. Then there was the publication of the DOJ’s OJP Order 2700.1, the proposed NDAA act, and so this forced people to look up and check what else is out there, and we saw an opportunity. 70% of our components come from the US and Canada anyway and we had an opportunity with a US assembly company — it made a whole lot of sense to spread to this side of the pond. Really it was a combination of people, materials, regulations all changing and aligning—it all came together”, said Dean.

How is the North American market different or similar to what you are used to in Europe?

“There can be a different perception of one product in one country to another country, which is quite remarkable — you’d assume people would talk more but they don’t. But internally, once someone in law enforcement and public safety has a bad or good experience, it spreads quickly. This is true for both sides of the pond, and we take that perception very seriously.

But the real difference between America and the UK is the scale of things in the US. You can have some very, very small agencies in the US who are not going to be able to afford the Sky Mantis. We don’t have those in the UK, the smallest office is at the Sheriff level and above, so they have bigger budgets. This is just a factor of the extremely fractured nature of law enforcement, fire departments, and public safety in the U.S. Right now, we are focused on those larger agencies in the public safety sector in the U.S. But that will be changing.” Dean replied.

He added, “Another difference is funding. Because you have large agencies in the UK they have internal funds and can raise funds internally. In the U.S., those smaller agencies who may want a Sky Mantis would likely apply for a government grant, which has restrictions on what you can buy with them.  And the DOJ has made a massive impact on the options that those people have. This enables us to offer our product in compliance, because it came from the same security concerns in Europe.”

This point of security and compliance leads to another question, what has been your experience adjusting to the laws and regulations in the U.S., especially in terms of the FAA and security?

Mike Dewhirst mentioned “At the moment we are more than compliant. In Europe, we have various regulations coming up with ADS-B and other such things, which will need to be integrated into the aircraft. We’ve already future proofed the systems so that additions are pretty modular, quick, and can be easily retrofitted. For things like collision avoidance and other potential requirements, we are working on them already.

We are still quite agile and are primed to listening and implementing what is requested. For example, if someone says they want extremely bright strobes on their aircraft - which makes sense and improves the product for everybody, we’ll work on that and turn it around quite quickly”.

Dean followed up saying, “To add on to that, looking ahead, if the UTM standards are the same on both sides of the pond, then great. If they’re not, we’ll have to adapt accordingly.”

Are there other industry sectors, besides public safety that will benefit from your solution in America?

Dean explained, “Since Commercial UAV Expo, we’ve had a great deal of commercial companies reach out to us. Because the Sky Mantis is a larger platform, we can lift sensors that other platforms can’t, things like optical gas inspection cameras, which are quite heavy. So there is some real interest from inspection companies. It tends to be all northern-based companies because they look at the one-hour endurance and its ability to fly in bad weather, which enables them to use it year-round.

So, aside from the obvious public safety sector for which we are purposefully designed, there have been other customers that are interested in our platform as an alternative to others they have used in the past.”

What are you most looking forward to happening with your jump across the pond?

Mike replied, “With the UK being a much smaller country with a smaller number of police forces, it’s just really exciting to get into a market which has the size and scale of the United States.

The other positive that comes with new customers is new opportunities to develop new products and a larger market will enable us to do more R&D — that is what we love and what we’re all about. We have multiple additional payloads, co-pilot 2nd viewer tablets, secure resilient LTE/3G/4G video streaming solutions, high resolution photographic cameras for mapping and crime scene documentation, AI based object detection (landmines, road cracks, peeling paint and much more) and much more that we have added to Sky Mantis to make it a more comprehensive solution.

We’re already working on a couple of new products. We’re developing a smaller unit called the mini and a fully electric VTOL, which will offer about 6 pounds of lifting capacity and 3 hours of flight, with a longer radio range. If you think about some of the states in the US, range is a major issue, even an hour of flight time is not going to get you far enough on a missing person search and other similar types of applications every time.

We want to expand the toolbox of emergency services, because at the moment it is still a bit limited. It is still early days in the industry. You need the right tool for the job, so we want to provide a plethora of tools for this industry. For example, we’ve already developed a tether unit that plugs into the Sky Mantis that offers you a mobile camera in the sky that can sit about 300 feet up within a 100-foot radius for 48 hours powered by the ground wire cable and a gas generator or a vehicle inverter or even mains power (out of a building). You can also drop that cable at any moment without landing and fly off for another half an hour without the cable if you need to take a closer look at something just out of range.

We’ve already seen how this can make a difference. In the UK there is a concert called Glastonbury, which is supported by police for security and other purposes. The concert is usually out in a field with no infrastructure nearby. It is quite common for people to become intoxicated and return to their tents to rest, and pickpockets and thieves then take advantage of this. A tethered unit can sit there monitoring the tent park like a mobile CCTV mast — it is very easy to spot on a thermal camera someone who is going in and out of tents — Sky Mantis can then drop the cable and pursue the thief and talk ground forces in to intercept them." 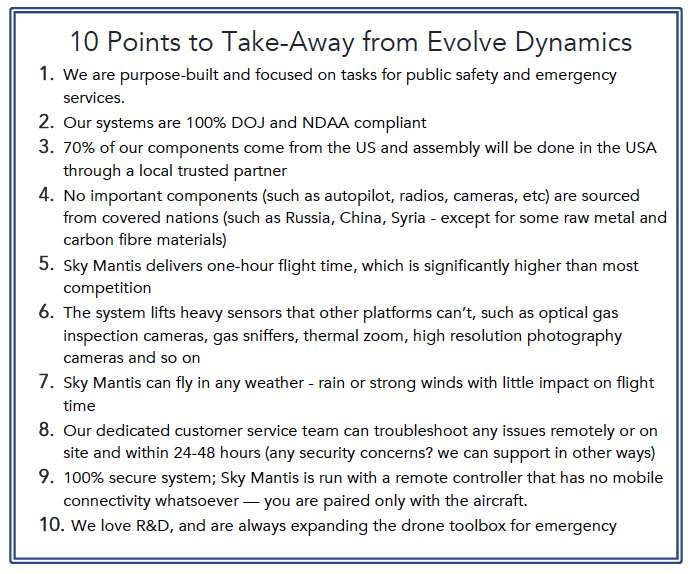 You can get more information about their systems on their website at evolvedynamics.com.