The Drone Industry Visionaries Panel Discussion that took place at Commercial UAV Expo Americas featured insights from a handful of industry leaders that are working to define what the future of the airspace looks like while simultaneously ensuring that drone technology makes business sense in the present. That balance between possibility and reality has proven to be a tough one to strike, but Mariah Scott, President at Skyward, A Verizon company, used the session to showcase how she’s been able to do exactly that for Skyward and the drone industry as a whole.

We caught up with Mariah to expand on her approach to finding that balance and also detail some of the topics she discussed on the panel which include Remote ID, 5G, what she’s looking forward to seeing come together in the drone space and more.

Jeremiah Karpowicz: As a drone industry visionary, you're obviously focused on the future, but you also need to ensure that this technology makes sense in the present. How do you balance this focus between the needs of today with the potential of tomorrow? 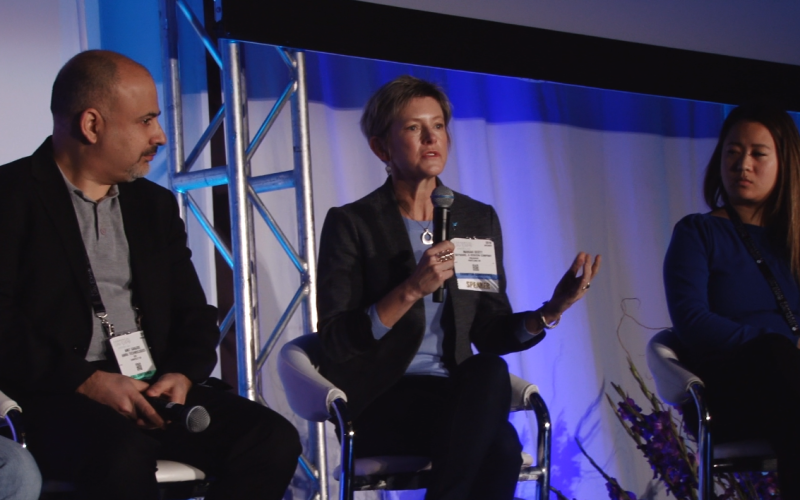 Mariah Scott: It's really important to focus first on solving problems for our customers. We're making sure that what we're doing today is solving a problem that delivers real value. We can then build on that in the future.

One of the issues that visionaries can run into is when their vision of the future doesn't necessarily solve a problem that people can identify with. It's one of the reasons I love talking about UAM and drones for delivery. That's a vision of the future that isn’t going to come together in the short term, but people can understand the problem because everyone wants to get their package quicker and spend less time in traffic on the road. So we can all imagine and envision a world where all of that gets lifted up to the sky to deliver this connected world, all of which is solving a problem today. So how do we move toward that with what we’re doing right now?

That balance ties into how drones are being used for inspection, for surveying, monitoring, etc. right now and how that value will increase in the future. Right now, this technology is delivering great value but we're building toward a future vision where you'll be able to gather that data from anywhere. You won't need to roll the truck or send a pilot out to gather that info as you do right now. So we’re solving problems and creating value today but also taking steps to see that value increased in the future.

How does that balance between what's possible with 4G today impact the efforts you're focused on when it comes to creating a 5G ecosystem of tomorrow?

The benefits of 4G and the ubiquity of the LTE network is going to help us operate drones beyond visual line of sight (BVLOS) safer and more securely than any other available methods. BVLOS is important because it opens up new use cases but also represents a change in the operating model from ‘one to one’ to ‘one to many’. We can do that with the LTE network. Someone can be set up in a remote operations center and manage a fleet of drones safely and securely over the network just like someone could deploy and manage a fleet of trucks over the network. That can happen on 4G.

Where 5G brings important advantages is the massive bandwidth that lets us do real-time data and video streaming in order to deliver those insights directly to the office from the field. The low-latency of 5G is important when you think about autonomy in an urban environment where we'll have lots of drones flying around. That's a future state, but it's something we need to consider.

5G is also about device density because it can handle and connect that many more devices. So your refrigerator, water meter, TV, drone, car, laptop, phone, etc. can all be connected and we won't have a lot of interference. That's also a future state that will function in an urban environment. With 5G, we'll be getting a lot of opportunity, but there's also a lot we can do with 4G along the way to directly enable that 5G future.

I know the question of Remote ID and UTM standards came up on the panel, so I wanted to see if you could talk a bit about that topic.

I always love it when a panel agrees, and that's really what happened during our session. It makes us all feel like we're all working toward the same ecosystem and the same solution.

Remote ID is such a foundational building block. All the beautiful visions of UTM and safe integrations of drones into the NAS aren't going to be a reality if we don't know who is flying. I feel like the industry has really come together with the ASTM standard to define and to demonstrate how industry can adopt and use that standard.

That happened when we worked with ANRA Technologies, Uber, AirMap, AiRXOS, ANRA, CNN and others to demonstrate network-based remote identification of drones with the InterUSS Platform. In our viewer, we could see the AirMap flights and they could see ours in theirs. That's what’s has to happen. That level of Remote ID on the technology side is really coming together.

And that's something the FAA is specifically asking to see demonstrated and enabled, correct?

Two weeks ago I was at the DAC meeting in Washington D.C. Previously, we had a report out on Remote ID and the FAA had asked industry to come back and show voluntary compliance. So we did.

At that meeting, we presented the standard and laid out how all of these companies can work together to do it. Now we need the policy input from the FAA to determine what specific data we need to exchange and what law enforcement and other parties like the public can have access to. We need the policy around the privacy requirements. That policy layer is what we need. I think the technical standards are there.

Being able to say that feels like the result of a collaborative spirit that was evident in that demonstration and that you displayed during the Visionaries discussion. What does it mean to you to collaborate with people and companies that in many ways represent the competition?

How will those collaborations and differentiators play into the development of a UTM ecosystem and perhaps the evolution of that concept into what you've described as a Universal Traffic Management system?

I really believe it's going to be a federated system that's driven by private industry. That means we’ll have a number of different providers.

I'm hopeful that we'll have technical standards and that we will have a policy overlay that talks about "what" and not "how". I’m hopeful that the FAA will be able to define the performance standards that we need to meet for safety. As the technology providers, we can work together to do that in a safe way. Let us figure out the “how”.

I think that's how UTM is going to roll out. It will be a set of different services from interoperable providers. Some of those will be common like LAANC or Remote ID, and some will be differentiated and targeted to specific services or to specific enterprise needs. And then some people are taking an approach to serve the regulators to figure out what the regulators needs.

We've taken an approach of serving the enterprise and working to determine what a company needs to have in order to safely access the airspace and be able to manage operational control and the full spectrum of an aviation program.

What are you looking forward to seeing come together?

I'm looking forward to the Remote ID rule and NPRM being released in December from the FAA. I really want to see that expedited process brought to reality. I think having that Remote ID rule will give the industry something it can rely on and adopt which is going to accelerate a lot of the advanced use cases.