Finding efficient, safe, ecologically sustainable, and inexpensive solutions for power line inspections has been a major challenge for energy companies. To inspect miles of powerlines, electric companies have either used employees to climb up every pole to inspect each line, which is not only dangerous but inefficient, or employed the use of helicopters to capture the data.

Although helicopters can capture a lot of data in a single flight there are a number of drawbacks. They are expensive to run and emit a lot of CO2 pollution into the air, especially when compared to the relatively light payload they are carrying. Because helicopters need to stay relatively far away from the lines to avoid collision, they require expensive cameras to get the level of detail for the data to be valuable. When a helicopter does crash, there are serious risks to the pilot as well as infrastructure due to its size and weight, which can lead to loss of life and major power outages.

Long-range VTOL drones provide a viable powerline inspection solution. Drones consume less energy, polluting less. They pose less of a risk to infrastructure and populations, and they are cheaper to operate and can fly closer to powerlines to get higher resolution images with less expensive cameras. Despite all that drones have to offer, there has been significantly less adoption than you would expect (although this is changing). Why aren’t we seeing a massive move toward drone adoption?

We often point to regulations and powering technologies as the culprit, but this isn’t the full story. Although BVLOS is still a challenge in many parts of the world, this is opening up in exciting ways and becoming less of a roadblock. Medium-sized drones, like the SDO 50 V2 VTOL by SwissDrones, that run on fuel, are capable of conducting longer flights on par with traditional helicopters—their primary competition—and will consume significantly less fuel than a helicopter.

“The biggest challenge is the status quo,” explained Dr. Michael Kronenberg, Member of the Board of SwissDrones. “I think SwissDrones has a clear business case, it’s just that we need to change a market that is not so quick to change. At the end of the day, the value is in the data, and the solution SwissDrones offers can create data more efficiently and economically with less pollution and risk. I feel like energy, oil, and gas companies are starting to look into this topic more actively and strategically. The industry just needs to create a little bit more traction about what SwissDrones is doing and how to be of service.”

Recently, SwissDrones did just that when they successfully completed a challenge from the French powerline operator RTE. The challenge was essentially to test whether a drone could take over the role of a helicopter while still producing the same or better quality of data. Finishing this challenge required logistical, regulatory, engineering, and professional know-how.

“RTE had some interesting requirements,” pointed out Luca Santini, Head of Sales at SwissDrones. “The goal was to be able to get high resolution pictures (1-2 mm/pixel) of a powerline stretch, including towers, insulators, spacers and cables, in a non-stop flight mode. Therefore, the participants needed to carry a certain number of sensors (RGB and as option thermal cameras) over a distance with a solid flight path. The combination of performance, payload solution, a stable flight pattern, a problem-solving attitude from our engineering team, and regulatory expertise in getting flight approvals for this type of heavier drone category helped us in this challenge.”

SwissDrones successfully went through all the steps to complete the challenge, which speaks to the level of preparation, flexibility, and capability the energy industry requires in order for it to adopt drone technology. The SDO 50 V2 is small enough that it can be ported around in a van or truck and deployed with two people within 15 minutes but is powerful enough to carry as much as its own weight (42 kilos or 92 lbs, including fuel and payload), thanks to its intermeshing double rotor design. It can operate autonomously or can be handled manually or semi-manually, providing operators with the exact level of control that they need to complete their mission.

Getting utilities to make the switch may be a demanding hurdle to go over, but the fact that SwissDrones was able to fulfill these requirements means that more opportunities could open up as other utility companies see the efficiencies in cost, quality data collection, and safety they are providing.

For Dr. Kronenberg, flying BVLOS is where many drone use cases will fully demonstrate their value for industries like energy utilities, surveillance, search & rescue, environmental monitoring, and oil and gas, who need safe, cost-effective, autonomous, and environmentally friendly solutions.

“The trend in the market is clearly going toward BVLOS,” he stated. “Civil aviation authorities understand that if the industry wants to replace helicopters for certain missions, you cannot really make a viable economic model with visual line of sight. This challenge with RTE was more of a demonstration of our capabilities, but if you want to get better efficiencies, you need to perform like a helicopter, and that is BVLOS. This is opening up, which is why we exist; we couldn’t make our economic model work without BVLOS flights.”

Later this year SwissDrones will be introducing an updated model to better support industrial inspection, aerial surveillance, and search and rescue operations. Their new product will boast longer flight times and range with a more robust engine with easier maintenance cycles, making it even easier to compete with helicopters for commercial applications.

Mr. Santini pointed out that this competition is not meant to take the human out of the loop, but rather evolve these industries by adding another tool to their toolbox for higher risk missions. Drones can help them better address the current needs of the industry, which are becoming increasingly complex and demanding. 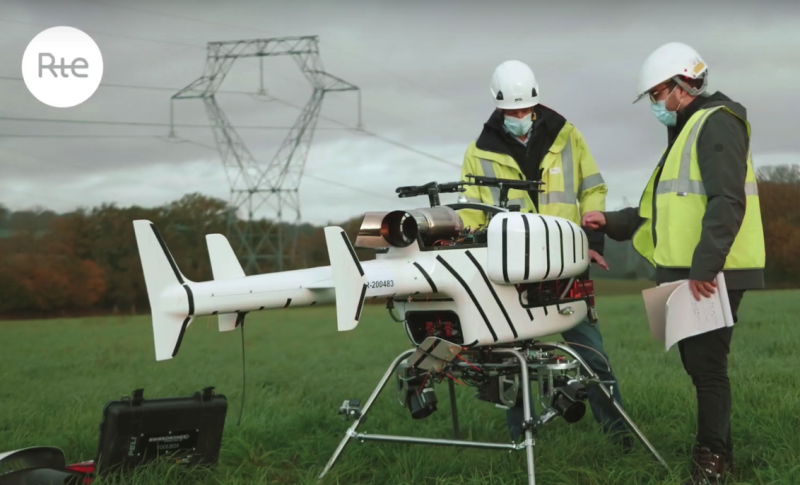 Drones are set to play a key role in ensuring the proper function and lifespan of critical assets and resources. For instance, inspection cycles tend to be measured in years and quarters rather than months or weeks. This means important assets are left untouched for long periods of time. As infrastructure ages and climate changes produce increasingly severe weather patterns, this is becoming a noticeable challenge. Drones are cost effective, relatively easy to transport, safer, and can quickly gather high-quality data, opening up the opportunity for drones to collect data more frequently and efficiently. The more companies can collect data about the status of their critical infrastructures or resources, the more likely they will be able to proactively maintain their assets rather than react to a disaster.

There will always be a place for traditional helicopters, but there is also a critical need for improvement in processes. This is something that drones can support. These improvements go beyond the drone itself to the payloads it can carry (e.g., LiDAR, hyper- and multispectral, optical, and infrared sensors); how long and how far they can carry them; and how the data is collected, processed, and acted on (e.g., edge computing and AI enhanced analytics versus manual visual observation). This is why mid-sized drones, like the SDO 50 V2 by SwissDrones, are important tools for these industries: they carry multiple high-end sensors, they fly for several hours using less fuel than manned aircraft and are designed to make downstream data processing and analysis more efficient.

To find out more about SwissDrones you can check out their website here.