Throughout AUVSI XPONENTIAL people asked what the major and/or exciting innovations were this year. And my answer was always the same: integration. It isn’t flashy but integration is an integral aspect toward maturity. Integration can mean many things. From a business perspective, it is the combining of essential components to offer end users a more complete solution—there have been many exciting examples of this recently. For administrator Steve Dickson, it means safely adding drones to the national airspace. Another definition, and perhaps the most exciting, is the integration of drone technology into our daily lives.

For many people in the world, the idea of drones being an integral part of their communities may seem like a novelty. But for the communities serviced by Zipline it is a reality. In his XPONENTIAL keynote, Keller Rinaudo, CEO of Zipline, quantified and qualified the impact of integration for these communities.

Rinaudo began his presentation with a time lapsed video and flight record of a day of deliveries at a distribution center in Ghana. Multiple flights took off and returned simultaneously, and by 12:25 PM, 58 deliveries had already been made carrying over 400 medical products. By the end of the 12-hour day, it had nearly doubled. He then shared several maps of the countries Zipline is servicing, demonstrating that their network was already available across much of these countries. 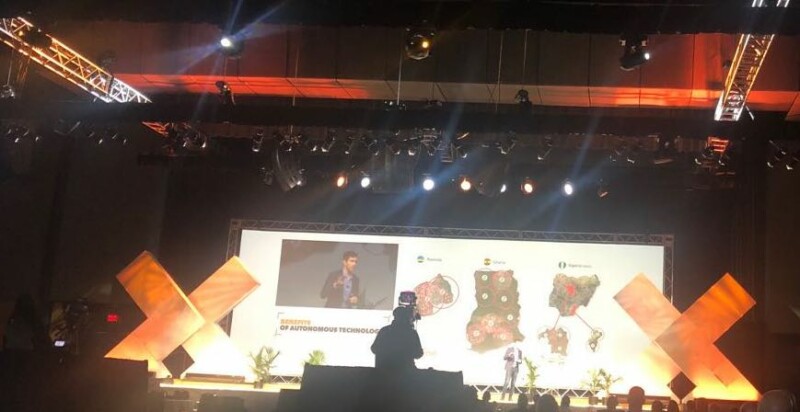 All of this underlined that Zipline is already performing drone delivery at scale and has been doing so for about nine years. From a logistics point of view this is impressive—Commercial UAV News often talks about how this will look like in the U.S. and Europe. But what Zipline has been able to demonstrate goes beyond logistics or business cases and speaks to how drones can improve lives in meaningful ways.

“We have totally changed the paradigm of health care,” stated Rinaudo. “Today, the ministry of health can train more doctors, nurses, and hospitals who didn’t have access to critical medical supplies to provide services that were only available in a few places. Patients can go to their local clinic rather than travel hours to get treatment. We’ve made over 20,000 life-saving emergency deliveries over the last couple of years. But beyond expanding access to healthcare, we’ve been able to help healthcare supply chains.”

“What we learned during the pandemic is that healthcare supply chains are surprisingly fragile. Bill Gates stated in an interview the other day that due to supply chain breakdown, a million children over the next five years are going to lose their lives due to basic, preventable illness. This is incredibly tragic. It is not enough that we have lost so many people to this disease, but that it will impact our ability to provide quality healthcare for years to come. One of the powerful things about drone technology is the way it can harden the supply chain and make it more resilient. For example, long-term treatments for things like cancer that were usually only available at institutions located hours away were disbursed directly to primary care facilities right next door to where people lived during the pandemic.”

By deploying drones to address the challenges that arose during the pandemic, Zipline not only maintained and strengthened the healthcare supply chain in Africa, but also facilitated a permanent change in how treatment was given, making it better and more convenient for patients. People no longer had to travel hours or move to recieve the healthcare they needed.

This was a theme throughout the presentation. Rinaudo told the stories of people whose lives were saved because they could send medical resources in time. Unfortunately, we are not seeing this in the U.S. where hospitals are closing at a record rate and rural communities are experiencing severe deficiencies in care.

“The U.S. has the highest rate of infant mortality of any developed country,” stated Rinaudo. “If you look at rural parts of the U.S., life expectancy has actually declined over the last decade. We are clearly letting people down. It raises the fundamental question: Why are we falling behind the rest of the world in terms of implementing this kind of technology?”

For Rinaudo, the reason why we are falling behind it isn’t because we have lost our ability to innovate or want innovation, nor is it the staff at the FAA, who he says are some of the most dedicated, or the other government agencies Zipline is trying to work with, but with antiquated policies and procedures.

“What holds us back is we are using a framework designed for a 500,000-pound aircraft and are now trying to apply that framework to a 40-pound Styrofoam aircraft carrying 500 kilos,” Rinaudo told the audience. “It is pretty clear that this doesn’t make sense. Until we take a fundamentally new approach for integrating autonomous aircraft into the airspace, the Americans who actually need this infrastructure and are crying out for it are going to be stuck waiting. This has serious consequences, just the other day Peter Buttigieg, the U.S. Secretary of Transportation, was saying that transportation policy is healthcare policy. We couldn’t agree more, we see that everyday across all our operations. This is why we are so optimistic. We know these problems are solvable with good engineering and safety practices. We don’t need to wait another nine years to provide these benefits to American communities. We have the ability to do it safely in nine-months. Clear timelines are going to be a core part of it. But to succeed, we have to be bold and work together to accomplish this. I think what's most clear to me is that American aviation has made giant leaps before for the American people, and they are now counting on us to do it again.”

Nine years is more than marking the number of years Zipline has been in business, it is also the same time it took for President Kennedy to announce that America would travel to the moon and for Neil Armstrong to get there. The complexity of that mission and what it accomplished when compared to what the drone industry has accomplished in the same amount of time in the U.S. draws a stark contrast, one that hopefully will pick up momentum with the BVLOS ARC and similar initiatives.

Events like XPONENTIAL and Commercial UAV Expo Americas—coming up on September 7th to 9th in Las Vegas—will continue to bring us closer to solving these issues by bringing key players together face-to-face to discuss ways to reimagine policy, standards, and a way forward so that we aren’t having this conversation again nine years from now.