Following up on the announcement of the tilt-pod earlier this year, FlightWave Aerospace Inc. continues set to redefine drone range, endurance and speed capabilities with the launch of the Edge-130 Tri-Copter UAS that combines various systems to achieve greater mission endurance.

Leveraging tilt-pod, thrust vector control, and customized autopilot technologies, the Edge-130 Tri-Copter should solve the energy consumption of quadcopters. By design, quadcopters are constantly dipping and compensating for the dip to stabilize themselves in the air, over and over again. FlightWave says “it’s a highly inefficient way to fly”, and “falling while trying to move forward, back, left or right requires more energy to power up the opposing rotors to ‘catch’ the fall”.

“One of our motivations for creating the Edge-130 Tri-Copter in the first place was, we wanted to build a drone that was faster, stronger, and that could fly longer,” Edmund Cronin, FlightWave's Chief Marketing Officer told Commercial UAV News. “We also saw the need for something that easily transported payloads to hard-to-get locations, and would be easy to put together and pack away.”

FlightWave’s tilt-pod technology allows pilots to have more control over the Edge-130 Tri-Copter, providing a more stable flying experience. With this technology, the drone can independently adjust the tilt angle of the front propellers, making it easier to fly the drone indoors, like warehouses and manufacturing plants, and outdoors where headwinds and lateral wind gusts require extra-strong performance. “The ability to move without ‘upsetting’ the body of the aircraft allows for the successful use of many sensors and cameras once too sensitive for traditional drones.” 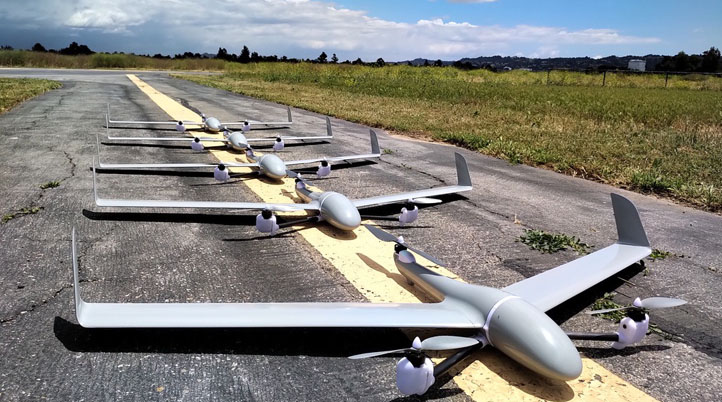 First tested in a rudimentary form on early aircraft more than 100 years ago, Thrust Vector Control refers to the ability to control a flying aircraft without control surfaces like wings or tail fins with flaps and ailerons. Similar to Boeing’s V-22 Osprey but on a much smaller scale, FlightWave’s Edge Tricopter Hybrid Airplane features this very same technology.

Additionally, the company had to develop a custom autopilot “that could utilize the huge fan in the rear for lift, while teaching the flight computer that it now had the ability to tilt its propellers forward and back for control”. FlightWave’s proprietary autopilot software allows the operator to chart an entire course before the mission — including take-off, navigation, steering, mission execution and return, without constant remote instruction after each task.

Moreover, FlightWave designed its own batteries - powered, weighted, and positioned for the center of gravity for best performance, which results in “a purpose-built craft for serious commercial work”. The drone manages its power consumption through a custom-engineered power management system, designed to sip energy.

“The majority of pilots report an average of 89 minutes of flight time, but it depends,” Cronin said. “Expect about 45 minutes in hover mode only versus close to two hours in forward flight. The biggest flight-time variant: mission parameters. Do you fly fast, do you fly slow, do you transform the aircraft multiple times to helicopter mode and look around?”

Furthermore, the Edge features a twist-lock nose cone design which allows swapping payloads in seconds. Nose cones are swapped just like high-end DSLR lenses, giving the pilot the ability to quickly change payloads and run multiple missions with different sensors using the same Edge-130 Tri-Copter airframe. FlightWave also offers a Payload Partner Program, where anyone can design their own unique payload for their mission.

“The Edge-130 Tri-Copter UAS was specifically designed to meet the U.S. Coast Guard’s strict requirements,” Cronin continued. “Building for the extreme allows us to happily say we are successful in multiple markets. We fly faster and farther than the competition and have been adopted so far in mining, rail-road security, coastal waters protection, anti-poaching efforts, and more.”

The Edge-130 Tri-Copter bundle costs $10,000.00, and “while it’s not inexpensive (the whole kit, case, extra batteries, custom touchscreen controller, and aircraft cost $10,000; payloads are extra and specific to each industry), the specs dominate any craft in its price range,” Cronin explained.

According to Cronin, “the Edge has been flown in many field applications:

For the future, FlightWave has several “exciting things in the pipeline, including a new UAS that offers limitless applications”.

What Is an Ion Propulsion Drone and How Could it Disrupt the Delivery Market?