Starting a Drone Program with Zero Acquisition and Maintenance Costs

The U.S. Department of the Interior recently announced an addition of 50 Vertical Take Off and Landing (VTOL) fixed wing UAVs, and these tools will round out a drone program that has become a real leader in terms of the application of this technology. Since the DOI is one of the few agencies that actually runs towards fires, floods, volcanoes and earthquakes, their UAS Program has allowed them to help officials gather critical information more quickly and act with greater clarity and agility.

This increase in efficiency and effectiveness is particularly important to the DOI, partly because it’s been referred to as the “Department of Everything Else”. It has vast responsibilities that include everything from fighting forest fires to monitoring wildlife to providing scientific insight about the nation’s natural resources and cultural heritage. Officials in the department recognized the potential drones could make for these tasks and more, but potential wasn’t going to be enough to make an investment. It meant the department had to move forward with drone technology while incurring zero acquisition and maintenance costs.From those humble beginnings came a program that has not only been expanded with that addition of VTOL UAVs, but has also been able to quantify the difference drones have made with saving $50 million in land and infrastructure value that could have otherwise been lost. Those financial benefits along with the impact to the DOI’s core mission underscore what it means to measure the value of this technology, but their path to creating that value is an especially relevant one to explore. A Vision for Integration DronesThe DOI’s drones flew nearly 5,000 missions in 2017, but all of that goes back to an exploration of the technology that was begun by Mark Bathrick, Director of Aviation Services at the DOI, in 2006. By Bathrick’s own admission, things started slow, as the department didn’t start training until 2009, and didn’t even start flying for missions until 2010. They always had a vision for introducing and integrating drones into their department, but they had no extra personnel and no money to make that happen.“Whenever you're going to start a new business line, the first thing you have to do is continue to deliver on your core business,” Bathrick told Commercial UAV News. “We’re tasked with providing the bureaus with hundreds of aircrafts and training for thousands of their employees so they are safe and mission-ready for the annual field and fire season. So we knew we couldn’t let anything take away from that, which meant we needed to free up personnel and resources to make this happen. That was something we achieved through the adoption of international quality standards that allowed us to increase the outcome efficiency of our core business, and that efficiency meant we were able to repurpose resources to experiment with and prove the value of drones.”As an ex-Navy TOPGUN fighter and test pilot, Bathrick learned about the importance of having a well-thought through strategy, and those lessons are evident in how the DOI’s drone program was begun. Their efforts to adopt drone technology never took away from the work and responsibilities that already existed, and instead helped prove where efficiencies could be created. That strategy around creating these kinds of efficiencies stems from the four must-have competencies to achieve commercial UAV success. 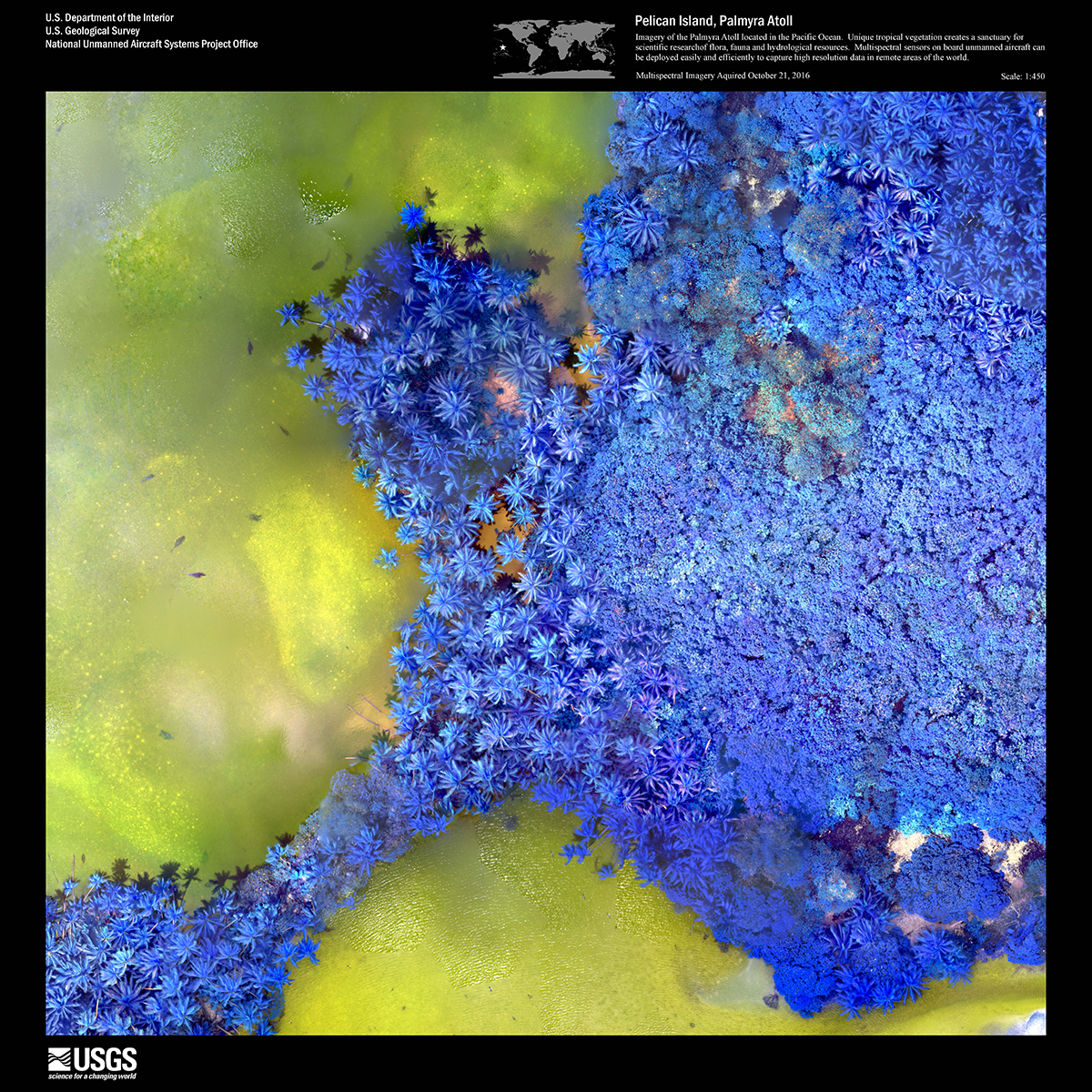 An example of what the DOI has been able to capture and create thanks to drone technology.

The Four Key CompetenciesAs a keynote speaker at the Commercial UAV Expo, Bathrick has previously talked about how and why aviation, privacy, security and culture need to be considered in detail when coming up with that vision for introducing and integrating drones. Each of the competencies requires expertise and attention, but the way in which they’re all interrelated is critical to understand.“Culture is a big one, because there’s often resistance to change and a new way of doing things,” Bathrick explained. That cultural aspect can go deeper though, and if the culture of the company is to treat drones as toys, then you’re not going to appreciate the responsibilities that are inherent in aviation. Likewise, privacy and security are somewhat invisible issues, but the old quote about aviation being terribly unforgiving of any carelessness, incapacity or neglect is more relevant than ever as we can see with the current public reaction to massive privacy and security breaches by some well-known companies. There are some company culture aspects that need to be addressed early on in a program, and I think that's been part of our success. Our continuing challenge is to make sure that our culture understands the importance of all those competencies and acts accordingly to address them.”Any organization that is looking to adopt drones into their business must fully realize the risks they are taking when operating aircraft, and that’s something that cuts across the four competencies Bathrick mentioned. Succeeding with these competencies is just the first step though, and opens up opportunities and options related to the core missions and challenges that an organization is looking to address. Supporting and Augmenting Core CommittmentsThe costs associated with drone adoption might be the biggest hurdle organizations are facing, but they certainly aren’t the only ones. Oftentimes, the additional challenges that stakeholders face will depend on the industry. For anyone using a drone on a farm, privacy concerns are not at the top of the list of issues that need to be sorted out. However, public officials have to deal with this issue in a proactive way, as it’s something that can often be the biggest issue for officials to work through. That can be especially problematic for the DOI, since every year they have over 400 million visits to DOI land, which is why from beginning to end, they emphasize that being proactive, transparent and collaborative with the people whose land they’re stewarding is essential.“The first step we took was to educate our own personnel and to help them appreciate the technology,” Bathrick explained. “When you see an airplane or helicopter flying, you assume that it's taking someone or something from point A to point B. But when you see a drone flying, you're convinced that it must be spying on you. Some might think that's a silly concept, but we recognize that it’s a purely normal, human reaction. That’s why one of the first things we did was sensitize our folks to the fact that this is out there, it's real, and it's something we can and need to address. We have to earn the public's trust. It's not given. We emphasize that every mission is an opportunity to earn that trust, but it's also an opportunity to lose that trust. ” 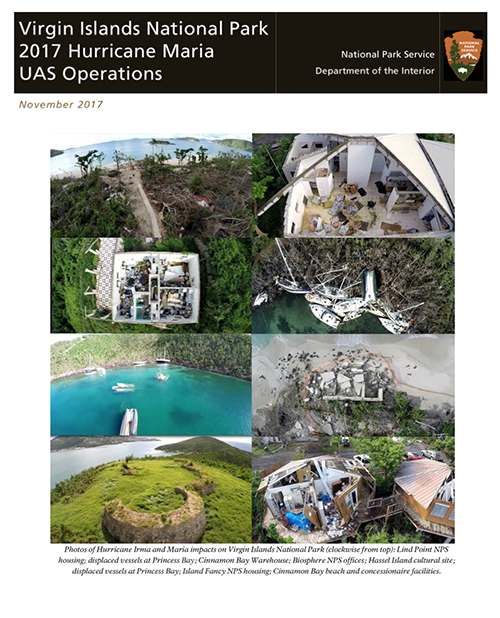 The 2017 Virgin Islands National Park Hurricane Maria UAS Operations Report, just one of the hundreds from the DOI website

Addressing that has meant having DOI officials reach out to communities about where they'll be flying and explaining what they're doing and why it's important. It’s meant being transparent with the data they’re collecting, and allowing people to access all of that. As a brief example of that transparency, under the DOI UAS Reports, Information Bulletins, Guides & Policy Document Releases resource, you can find 19 linked files that provide incredible access to exactly what the DOI is doing with their drones, and the type of information they’ve gathered with them.That access includes the 2015 Interagency Unmanned Aircraft Technology Demonstration Plan as well as the 2017 Boundary Fire UAS Operations After-Action Review and Lessons Learned and the 2017 Virgin Islands National Park Hurricane Maria UAS Operations Report, along with a Detailed summary of 2017 DOI UAS Flights. A recent Searchable DOI UAS Imagery Data update allows viewers to engage with this information on a whole new level.That’s just a brief look at a few of well over a hundred total files on the DOI’s UAS pages, and they’re constantly adding links to share with their bureau and interagency partners and the public. This effort underscores their commitment to a culture that has always emphasized consideration of and transparency with the American people. It’s a core commitment that drones have not only supported, but augmented in a very real way.The scope of the DOI’s UAS program along with the successes they’ve been able to document with it might make it seem like the adoption of this technology was always going to be a given for the department, but in fact, the opposite is true. Bathrick and plenty of other officials will be the first to admit that some of the challenges that came up made them question what they were doing at times, and whether or not anything would come of their efforts. With that being the case, and knowing now where things ended up, what advice would Bathrick have for himself if he could go back to the beginning of this process?“If I had my choice, I wouldn't go back to the beginning,” Bathrick concluded. “I'd go back to somewhere in the middle, when the cultural and fiscal challenges seemed like they were insurmountable. I would go back and say that it's okay at the other end, and to stay with it, and roll with it, because in the end, you’ll be extremely proud of what you’ve accomplished. Even with all that we’ve done we still aren’t finished, as we're looking forward to continuing to grow and build this program as a responsible program into the model of “drones for good”, and that’s something anyone struggling with creating their own UAS program needs to recognize.” 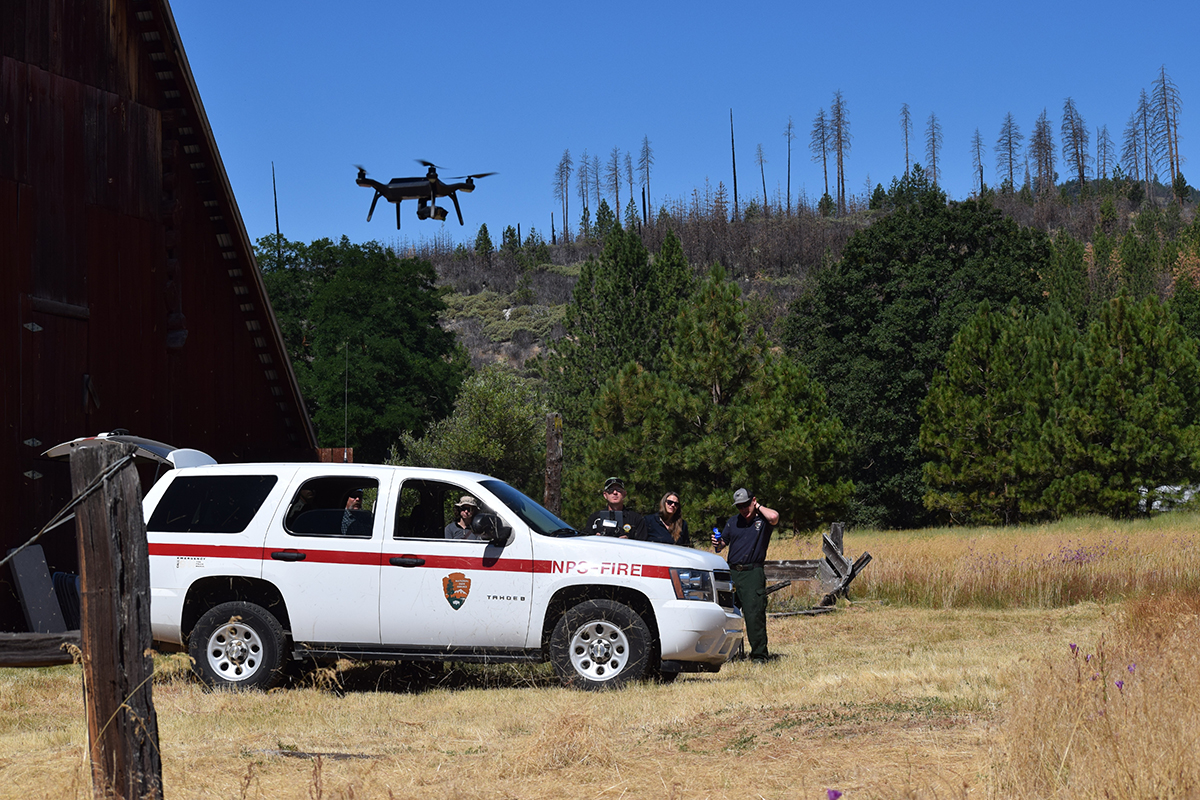 Detailing the Success of the L.A. Fire Department’s Drone Program