LiquidPiston Enters the UAV Arena with a Revolutionary Rotary Engine 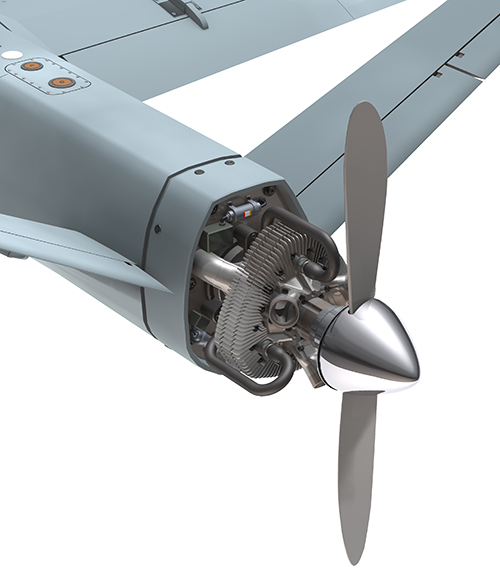 On March 6th, LiquidPiston Inc., an advanced internal combustion engine technology company, announced its intention to enter the UAV market with a revolutionary rotary engine aimed at powering medium-sized drones. As part of the company’s push into the UAV market, it presented at the Starburst Accelerator’s Selection Committee in Israel on Wednesday, March 7th. The invitation-only event brings together highly disruptive companies in the aerospace industry every year to present to representatives from global and local aerospace corporations, defense industry officials, venture capitalists and leading university faculty.LiquidPiston has spent a decade-plus reinventing the rotary engine that Felix Wankel created in 1960 and that Mazda is rumored to be bringing back to life in 2019. In an exclusive interview with Alexander Shkolnik, CEO and Founder of LiquidPiston, we had the opportunity to inquire about the technology in general and the announcement in particular.Juan: Tell us about LiquidPiston technology.Alex: LiquidPiston has reimagined combustion engines with a platform that can run on multiple fuels, including diesel, jet fuel, and gasoline, using an optimized thermodynamic cycle and a new rotary engine architecture. This architecture involves only two primary moving parts, a shaft and a rotor, and corrects the major performance, sealing, and lubrication weaknesses of previous rotary engines such as the Wankel. The ‘X’ engine is fuel-efficient enabling greater than 50 percent increases in flight endurance. Furthermore, the architecture significantly reduces engine vibration, noise, and heat output, which minimizes engine impact on ISR equipment and UAV heat, noise and EMI signatures. The lightweight rotary ‘X’ engine is capable of achieving compression ignition in a single stage at a weight of just 1/10th of typical diesel-fueled, piston engines.Juan: What compelled you to present at the Starburst Accelerator, and why now?Alex: We’re excited to present at Starburst Accelerator’s Selection Committee conference in Israel and share our disruptive new propulsion solution with leaders in the UAV and broader aerospace industry in an effort to secure funding and present an alternative to the current power systems available to manufacturers. As the UAV space grows into a $50B-plus market by the mid-2020’s, we believe LiquidPiston’s technology will help UAV manufacturers and operators reimagine unmanned flight possibilities.

Juan: What makes your rotary engine so different from current internal combustion engines?Alex: Conventional IC engines have an average power output of 15% to 20% of the energy created by the fuel consumed; our rotary engine has an average of 35% to 40% and it’s ten times lighter. The prototype we are working on for the UAV industry involves only two moving parts, a shaft and a rotor, and corrects the major performance, sealing, and lubrication weaknesses of previous rotary engines such as the Wankel. In addition, this architecture significantly reduces engine vibration, noise, and heat output, which minimizes engine impact on intelligence, surveillance, reconnaissance equipment and UAV heat, noise and EMI signatures.Juan: Are you promoting the idea that these benefits will increase Time in the Air (TITA)?Alex: Yes, we expect to publicly test our pre-production engine powering a UAV later this year and prove that the configuration will help drone manufacturers and operators improve flight endurance by 50%+. As the LiquidPiston draws closer to the first pilot of its propulsion solution on a drone this year, we will be following closely the tests and will report accordingly. It will be interesting to see if alternatives such as a rotary engine can help manufacturers stay in the air longer, thus opening the door for new applications and in preparation for legislation authorizing flights BVLOS.