We've talked about how Insitu solutions are being used in emergency situations, and it's always refreshing to be able to detail how drone technology is actually making a difference. It's a distinction the company has been able to further demonstrate in a different industry, as they've announced they they're working with Shell's QGC business to deliver automated infrastructure inspection and management services for their operation in Queensland. 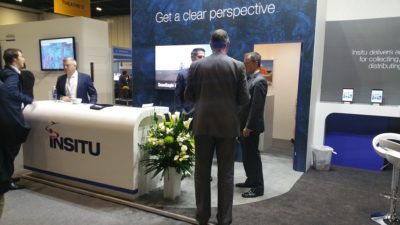 The Insitu booth at the Commercial UAV Show

The beyond visual line of sight (BVLOS) flight operations are being conducted in the Surat Basin over a broad area of Civil Aviation Safety Authority (CASA) approved airspace encompassing over 700,000 Ha. The program has provided safety and efficiency increases the company has been able to document and measure. However, it's the tangible impact to the entire operation that might be most notable."The area we're flying really lends itself to UAS because of the size," Andrew Duggan, Vice President Insitu Commercial, told Commercial UAV News. "It goes beyond what kind of data is being gathered on a single flight though. The technology is impacting what kind of equipment Shell is using, what kind of facilities they're building, and even how they're interacting with the farmers who own so much of this land. We needed to prove the value, and it's something we've been able to do in a variety of ways."After seeing how the program would be able to improve safety performance, allow the company to efficiently and effectively survey infrastructure and reduce the footprint on the environment, Shell made the decision to move forward with the program. These are distinctions they've been able to measure in detail, as the potential reduction in travel for the company by up to 800,000 km per year is just one of the measurables they've been able to establish. It's just the beginning of the value this type of usage can open up."BVLOS is truly the next frontier," said Jon Damush, Chief Growth Officer for Insitu. "This use case shows how much value can be extracted from this type of operation, but also what can happen when you collaborate with regulators. People often ask when the air space is going to open up, but it's really the industry's job to present the use cases around where and how a change needs to take place. This usage proves what's possible when you present a safety case that works within the existing rule sets."Many professionals believe BVLOS operations will need to be opened up before the value associated with the technology can truly be realized. The work Insitu is doing with Shell is a great showcase of why that kind of talk has dominated so many conversations, since it has allowed them to solve some of the issues Shell is dealing with now, but also begin to figure out how Insitu solutions can solve problems for them next year. That's all while making everything they're doing safer and more efficient.To learn more about Insitu, visit their site, but stay tuned for an exclusive with Jon Damush around how Insitu solutions are enabling decision-making authority.