Farmers Insurance Flies Ahead With Launch of New Drone Program

We’ve touched on the potential impact drone technology can have in the property & casualty insurance industry, and the benefits UAVs can provide in this sector are both real and quantifiable. It’s a fact that one of the biggest insurance companies in the nation has recognized and is looking to leverage for the benefit of their organization and their customers.

Farmers Insurance recently announced that it is moving forward with plans to setup a nationwide drone program. Farmers will focus their drone efforts on areas most impacted by hailstorms and other severe weather events with an initial fleet of UAVs that will be provided by Kespry. The fact that these drones are designed to function as a complete solution was a factor in Farmers choosing Kespry, and will also influence how they’ll be utilized and scaled in the present and the future.Officials at Farmers Insurance have talked about how the technology is set to improve claims representatives response time and safety, and the fact that actual claims representatives will be utilizing this technology is essential. The Farmers employees who will be operating these drones will be trained to do so, but they are not skilled pilots in the traditional sense. Allowing a variety of people to use drones in this manner answers a key question for large enterprises around commercial UAV adoption, and it’s easy to see what kind of a difference that can make in the short term. However, it’s even more exciting to consider how this program will expand in the long term. 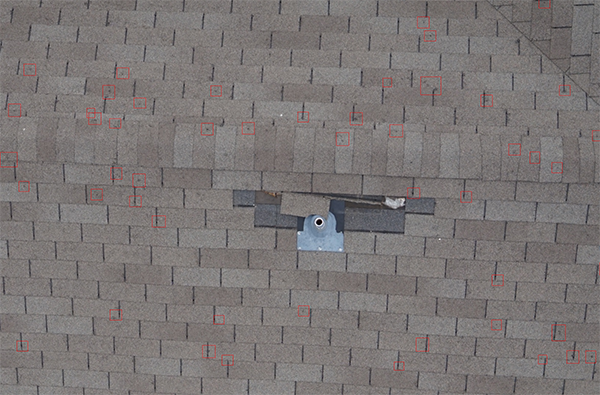 Example of a roof damaged by wind and hail.

Supporting the Claims ProcessTraditionally, and even to this day, Farmers Insurance handles claims in a variety of ways. They can be done in person, in the field, at a customer’s residence, or even over the phone depending, on the type of loss and information that is available. While representatives use a mixture of traditional and new tools out in the field and in the office, the company needed to understand how drones could augment the work that was being done with a tape measure or ladder before they moved forward with anything.There was always the potential to get faster inspection times and keep adjusters safe with drone technology, but turning that potential into reality was something that had to be tested. Tim Murray, Head of Inside and National Property Claims for Farmers Insurance, was involved with the field tests the company conducted to assess the most effective ways Farmers would be able to utilize drone technology with its existing claims operation.“We got out in the field and tested the technology on actual homes and residences,” said Murray. “We were able to measure it against someone doing the job in a traditional sense of actually getting up on the roof and identifying damage, but we also factored in variables that aren’t considered like how far an adjuster has to drive from one house to another, or whether a claim rep would have to fly a property ahead of time. Those results really guided our decision.”Their decision came down to the fact that drones would be able to support the work that was already being done, which meant a UAV could be utilized as a tool when necessary. Being able to think of these devices in the same way that a ladder or tape measure is thought of is dependent on those adjusters actually being able to use the technology, since the Farmers’ drone program will use Farmers claims professionals throughout the claim handling process. Doing so isn’t just a technology issue though. It’s about a process that’s designed to serve the needs of those users.“It’s really important that an adjuster knows the work they’re already doing can be easily complemented with a solution like ours,” said George Mathew, CEO of Kespry. “We’ve thought through what this experience could look like on behalf of the claims adjusters themselves, so in a lot of ways, we're plugging into the way they work versus trying to add a whole new and different process to the picture.”Considering how drones can augment the work being done rather than replace a specific tool or task is a key factor in adoption for various professionals, and it’s easy to see what kind of a difference UAVs can make when their usage means an adjuster can get the info they need faster and without having to climb onto a roof. However, recognizing those distinctions isn’t always enough. Creating a Drone ProgramFarmers Insurance has been looking at drones for about five years and trying to figure out how they might utilize them. Originally, the idea they had was to use them in the context of a catastrophic event, but further testing and changes to regulation under Part 107 changed their perspective. In the course of their research, the company was able to understand just how much was possible with the technology, but also recognized they needed to limit their ambition with it.“One of the biggest challenges we faced was around not trying to shoot for everything,” Murray said. “We needed to figure out how to narrow the size and scope to have success rather than just constantly be testing and trying to figure out what might be the right use case and how do we get it into our workflow. That allowed us to shift our focus to something we knew would work, and then prove out the financing benefit of it.”That kind of focus is a key element in being able to make a drone program a reality, and it’s a lesson that’s as true for massive organizations like Farmers as it is for much smaller ones. Being able to utilize the technology in a way that makes sense, logistically and financially, is something that needs to be tested and worked out before moving forward. There are also significant advantages associated with tools that are constantly being improved to help meet the specific needs of an industry.“We're testing a new feature right now where the propeller does an auto-shut off as soon as the drone lands,” Mathew continued. “This is really meant for close quarter flights that you'll end up doing specifically in the insurance space when the drone is gathering info for damage assessment. We want to make sure that innovation cycle is always present and available for end users who, in this case, are the adjusters at Farmers.”Improvements like these to the physical capabilities of drones will continue to be made, and they’re developments that will impact a variety of sectors and users. However, the importance of the data that these tools are gathering is something that will never change, and it’s a key element around how Farmers will use these tools in the present and the future. 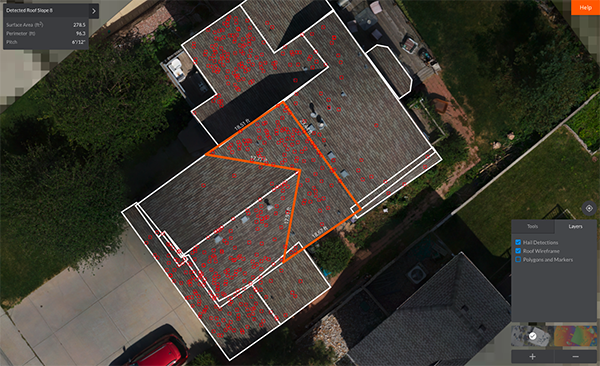 Data and DronesDrones are more reliable than ever, which means the logistics of getting a drone into the air, flying a site and gathering the appropriate information is in many ways the new baseline for commercial users. Most users expect those logistics to be readily achievable, and that reality has opened up new opportunities to utilize the data being gathered. It’s something the team at Kespry is actively focused on.“We're excited because we're at a point now where we can create a very accurate model that the Farmers’ team can use for not only claims processing but for other downstream use cases,” Mathew continued. “Our belief is that as long as we serve Farmer's extremely well, in terms of what their need is for claims, we'll be able to naturally open up other opportunities beyond just claims processing alone. But it all starts with using that data to improve the way work gets done today.”Those downstream opportunities are numerous, and they tie into Kespry’s vision for data products creating other data products. Layering data in this way will provide fresh insights to the Farmers team that will allow for a more complete perspective of the business and drive even higher quality decisions. The business intelligence opportunities that will be created from a new set of field data is something Farmers is already considering.“We're excited about the potential to use the imagery for predictive analysis,” Murray said. “I think it can get us to a place where we're able to use different imagery and data points to more effectively analyze damage. That's one of the most intriguing things about the Kespry solution that brought us in.”The concept of an organization utilizing a “fleet of drones” has made headlines for a long time now, and the fact that a company the size of Farmers is investigating how this technology can work at that scale is a major milestone. Their current focus on using drones in areas that are impacted by severe weather events is creating a model that can be further scaled and augmented once additional improvements to machine learning and the autonomous capabilities of the technology are made.These are the sorts of opportunities that exist right now under Part 107 and with solutions that are designed to work at small and large scales. Farmers has made a strategic investment in the technology, and that investment is tied into their ability to get their own representatives to use this technology, which will improve the experience of their customers. It’s a distinction that’s about much more than a single innovation.“The technology is really an investment in our business,” Murray concluded. “It's an investment in our customer, and when you get into the safety aspect for employees, it’s not just a question about the bottom line. At that level, it's beyond a traditional cost-benefit analysis.”

PrecisionHawk partners with EagleView and acquires HAZON and InspecTools