Jeremy Grogan, Part 107 Waiver Team Lead, FAA Flight Standards Service, as well as Randy Willis, Manager, FAA Emerging Technologies Team, took part in the “Get Advice From the Approvers” session at the 2019 FAA UAS Symposium. While operators may request to fly specific drone operations not allowed under Part 107 by requesting an operational waiver, there are many questions about how the FAA processes and viewers such requests. Grogan and Willis talked through the FAA’s approach to waivers at a high level, but also answered specific questions and provided key insight around their process. 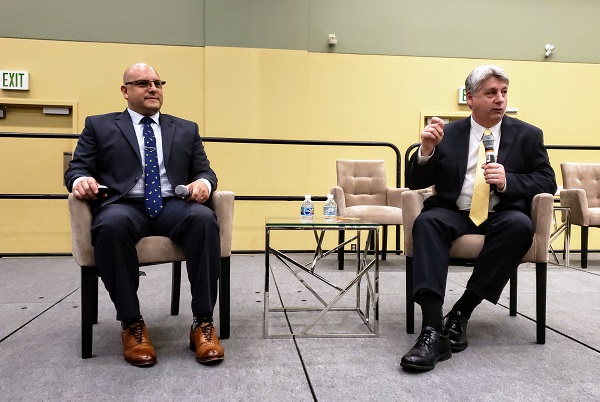 What’s Important to the FAAThe most important thing to the FAA when it comes to granting a waiver or not is whether or not the operation impacts the level of safety in the NAS and the safety of non-participants. The safety level proposed in the waiver or exemption application is the most critical aspect of any application.The FAA is also looking to determine whether or not an operation can safety be conducted under the terms and conditions of a waiver or conditions and limitations of an exception. The three main things they’re looking for come down to hazards being identified, an assessment of risk and mitigation strategies. As part of that, it’s about quality vs quantity. Willis recommended that applications should be targeted in terms of the info that’s being laid out. If they receive a 600-page report they’ll read it, but it will take them time to get through everything.One of the biggest mistakes they see when asking applicants about their waiver is an answer along the lines of, “it’s common sense”. The FAA is looking for documentation around what specifically will occur if something unexpectantly happens. Minimize your chances of a disapprovalThere was an 8% approval rate of approvals last year, but this year that has climbed to 18%. While that isn’t a huge jump, it signifies that the applications have gotten better and the FAA’s process to approve them has also improved.Grogan and Willis also mentioned that using the waiver safety explanation guidelines was essential. It explains the importance of describing the Concepts of Operations (CONOPS). Don’t assume the FAA knows your operation. 250-350 requests come through every week. They rely on the applications to have all the information they need to make a decision, and people can define their terms in these applications.Another big mistake they see is when applicants copy and paste information from one waiver into another. The details matter. If someone is using a “return to home” feature, but the UAS they’re using isn’t equipped with that capability, then it’s a major red flag.Another mistake they see is when applicants are trying to receive permission to do something like survey an entire state. Grogan and Willis recommended that applicants build a base first. Take a methodical approach to something small with a waiver, but tell the FAA that there’s a desire to expand what’s there and provide a timeline. The FAA can then provide direction. Top Three TipsClearly identify your proposed operationsProvide a complete operational descriptionDo not make assumptions More Tips and AnswersFor something known and simple, details associated with what you want to fly and how you want to fly are all applicable. If there are any limitations, they should be matched in the environment. Just because a piece of hardware is known or commonly understood does not mean it shouldn’t be mentioned or included in an application.The FAA doesn’t want to come out and say something like “use parachutes”. An application needs to justify those specifics in and of itself with CONOPS and data details.For a public safety official flying under Part 107, does the certificate belong to the agency or pilot? The answer is that it depends on how the waiver was applied for. On a waiver, there’s a “responsible person” identified, and that highlights who has operational control.While the FAA isn’t ready to move forward with something like a “known operator list” to expedite approvals, it is something they would consider. Additionally, they have changed their processes based on feedback and requests. As an example of what that can look like, there are now four different status indicators for a given waiver application.The last piece of advice given by the panel was associated with 107.41 waivers and 107.41 authorizations. The overwhelming majority of applications, which Willis estimated as 99.9 percent, can be done under 107.41 authorization. The 107.41 waivers that were submitted were unnecessary. Willis recommends that if you want to submit a 107.41 waiver, submit it first as an authorization. ResourcesThe FAA UAS website is an ideal starting place for anyone looking to basic resources about applying for or receiving a waiver.www.faa.gov/UAS-Additionally, the FAA Drone Zone contains numerous different pieces of information and is essentially a one-stop-shop for all UAS information and resources. There are application instructions on the site as well as a waiver safety exploration guidelines.https://faadronezone.faa.gov/