As we have learned over the past century, disruptive technologies have a way of making our lives better or easier and at the same time have a devastating effect of established ways of doing things “the old way.”

Unmanned aerial vehicles are here to stay and, in some instances, to erase from the map (no pun intended) some “old ways” of doing things. As a pilot of crewed aviation and longtime admirer of the skills required for aerial crop dusting, I have to admit that drone agricultural spraying is here to stay, and it will be growing as an industry as better aircraft are launched and longer flying times allow for larger fields to be treated.

In terms of efficiency, a portion of the chemicals that are sprayed over crops are lost to winds and the effects of the propellers in single engine aircraft and the wing-tip turbulence inevitable in these types of flights. Helicopters are a bit more efficient, but in general terms crewed agricultural crop dusting is notoriously wasteful and dangerous.

Now a new way of applying chemicals to crops is emerging with drones equipped with nozzles placed directly underneath the rotors in a way that uses the air flow to send the spraying directly into the plants.

In order to understand better how the emergence of this new technology is changing the way we spray crops, we reached out to Bryan Sanders, President of HSE, an agriculture spraying services, drone sales, and training company based in Casselberry, Florida.

“In 2009, we entered the world of uncrewed aviation by offering drones for aerial monitoring, especially for public safety agencies, but in a short time discovered that the market was saturating really fast, and companies were entering the marketplace with home-grown solutions that made profits very difficult for a quality offering,” Bryan said reflectively. “That’s when we decided to switch to agricultural spraying as means of entering a more regulated market but also an industry with an enormous growth potential as more and more farmers discovered the advantages of spraying with drones as opposed to traditional methods like backpacks and ground sprayers.”

The issues related to crewed aviation were discussed as one of the drivers, but the more pressing contributors for the rapid emergence of uncrewed agricultural spraying was about landowners optimizing their crops. Growers are competing on a global market for food supply and need to increase productivity while decreasing costs which is increasingly difficult to accomplish in today’s labor market; this topic came up again and again in our conversation. 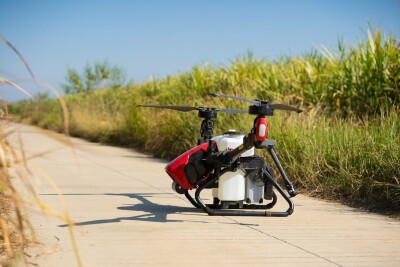 “One of the issues that gave us a clue into how big this industry would eventually be, was applicator safety and statistics from the past 50 years,” Bryan said. “Given the heightened awareness and regulatory focus around pesticide use, exposure to these chemicals is endemic in traditional spraying. Most traditional application methods require the applicator to be at the exact site of application. And we are all hearing about folks suffering from illnesses caused by excessive exposure to pesticides. Research shows that applications by drone reduce operator exposure by 100 times and that’s extraordinary!”

Plus, Bryan continued, “the younger workforce is much more excited about flying drones than donning a backpack sprayer! Then you add the sad statistics of fatalities from our friends in crewed aerial spraying as they must dangerously maneuver around trees and powerlines at low altitudes and a picture emerges of an industry that would really benefit from a new tool in the toolbox and spraying by drone is a great tool. We’ve participated in (and caused) a lot of research in this space, and the results are exciting. We’re able to effectively mitigate drift, penetrate dense canopies and achieve high quality applications with the perfect combination of nozzles, flight parameters and aircraft.”

The Environmental Protection Agency (EPA) has a web page dedicated to analyzing and recommend policies to decrease pesticide drift, and the damage to adjacent crops that were not the original target of the spraying is enormous.

“With HSE’s systems and training protocols, we have fine-tuned a methodology to teach pilots the intricacies of agricultural spraying in a safe manner both while flying and on the ground while handling the chemicals,” Bryan said with conviction. “We represent the three best brands of agricultural UAVs, giving our customers choices when it comes to the selection of a spraying platform that perfectly suits their exact needs.”

Agricultural aviation has existed for a long time in the form of the Federal Aviation Administration (FAA) Part 137, and learning to fly under these rules is a strict component of HSE’s methodology.

“We not only provide the hardware and the training, but we also help our customers obtain their Part 137 certification, so they can comply with local laws and rules imposed by the FAA,” stated Bryan.

After doing some research for this article and seeing the effects of overexposure to pesticides, the pains of backpack and tractor spraying, and the flying techniques used in crewed agricultural spraying, we can only conclude that using uncrewed aircraft for crop dusting and removing the applicators and pilot from the line of fire in both fronts is here to stay and the days of crewed agricultural flights might be numbered as we wait for better flying times in existing uncrewed aircraft so they can cover larger areas.

In the short term, we are looking at an industry where crewed and uncrewed aviation will coexist, perhaps paving the way for a more harmonious way to collaborate in all aspects of this exciting industry.

Drones on the Front Lines of the COVID-19 Pandemic