Earth is a giant magnet. Compasses — both digital and analog — are oriented by the magnetic force at a user’s location. Since geographic and magnetic poles do not align, geomagnetic models like the World Magnetic Model (WMM) correct for this difference.

But why am I telling you this and why does it matter to the drone community?The WMM is embedded in thousands of systems. More than a billion smartphone users depend on the WMM to point them in the right direction when they use mobile navigation apps. Drivers rely on the WMM to power the compasses in their cars. The WMM is also critical for military and commercial uses around the world. Among other applications, it supports navigation and attitude determination for submarines, satellites, manned and unmanned aircraft, while also informing operational logistics like the numbering of runways.Production of the WMM currently uses space-based magnetic field measurements that the European Space Agency (ESA) Swarm mission has provided since 2013. Swarm mission satellites contain several instruments capable of producing a variety of measurements, including magnetic vector field measurements. To ensure sustainability of the WMM, the U.S. government is taking a proactive approach to identifying new methods of data collection independent of Swarm. 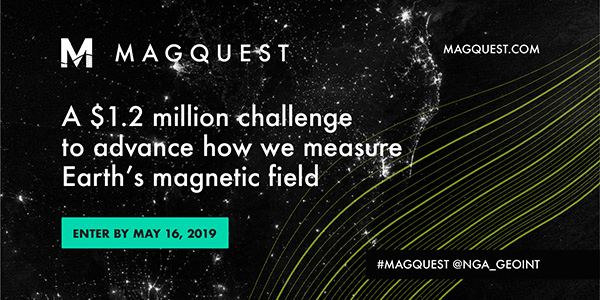 A New York-based company, Luminary Labs, is the designer and producer of MagQuest, a prize competition on behalf of the National Geospatial Intelligence Agency (NGA). The purpose of the competition is to identify novel approaches to geomagnetic data collection for the WMM.The competition is aimed at exploring how other methods, such as drones, might accomplish the same goal, drastically reducing costs and increasing efficiency.We reached out to Sara Holoubek, CEO of Luminary Labs for a more detailed explanation of what the competition entails."The challenge welcomes domestic and international solvers to apply their expertise to spaceborne, terrestrial, and aerial solutions — inclusive of drones," Sara told Commercial UAV News.The competition, in its entirety, is comprised of two phases. Here are the key dates for Phase 1, which seeks initial concepts (https://www.magquest.com/schedule/): We believe this is a great opportunity for anyone offering UAV services to open up a new revenue stream.