Every year the market releases new drones and payloads for commercial use. The variety and improvement of hardware coming out of manufacturers keeps getting better as markets become better defined. These platforms are collecting data more accurately, faster, for longer periods of time, and with multiple payload sensors. Yet, the true measure of value is really the data itself. However, the methods for gathering, storing, and integrating that data in many sectors like emergency response and public safety continues to be more or less the same—despite significant improvements in other parts of the process. This is something Romeo Durscher, is taking on in a big way with his new role as Vice President of Public Safety at Auterion. 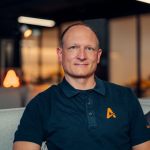 “Hardware improvement will continue to be part of the drone industry, but what entities have really started to see, especially those that started early on is that the data is what is really important,” Durscher told Commercial UAV News. “But that whole data aspect is in what I would call a ‘consumer stage.’ The majority of the data is stored and handled through SD cards or an internal hard drive inside the drone; this is not where the industry needs to go. In enterprise, we need workflows, we need data integration to bring more ROI to the end users.”

The goal is to not only meet existing workflow standards and expectations, but to exceed them to provide better value—otherwise, the case for adopting drones doesn’t make as much sense. In order for data to be useful, it needs to get off of the drone into the eyes of the users as quickly as possible and then be seamlessly integrated into existing workflows to enable real-time decision making and data analysis. Nowhere is this illustrated better than with public safety and emergency response, where life-saving actions come down to the second and waiting for critical information to come off of a drone once it has landed isn’t an option.

When drones were first introduced into emergency response, it was seen as a great way to put eyes in the sky to get better situational awareness without putting people at risk. Despite this compelling use case, what they could do beyond that was limited because only the operator could see what was coming from the drone.

The only way to get that immediate visual data was to look at the operator’s screen. With multiple people looking over an operator’s shoulder the challenges were clear—it was an added distraction and took multiple people out of the field. They figured out how to move those images to a bigger screen via HDMI, which freed up the operator, but just put everyone around a bigger screen. This left those not in front of the screen, like incident command and other critical personnel, to rely on second-hand data reporting, which wasn’t much different than what was being done before drones were introduced.

To solve this, the next step has been to enable secure real-time streaming so that multiple people can get that data firsthand to make informed real-time decisions, whether they are on scene or at a remote location. This capability shifted the paradigm because it enabled everyone to have eyes on the scene and make better decisions based on real-time firsthand information. This also means that people can be at a remote command center monitoring, analyzing, and/or processing data, potentially from multiple drones/sites, without having to take time to travel to the field. This is an important time saver and force multiplier.

However, this data still needs to be archived, this is where the SD card or internal or external hard drives have become an information bottleneck. It is not easy to sort or find data stored on multiple devices and transferring data between devices adds time and unnecessary steps. In order to make data truly accessible, it must move seamlessly from the platform directly into systems where it can be properly archived and retrieved without having to offload data from a device.

When looking at the whole process from collection to archiving, it is clear that we have to think beyond hardware and enable smooth data transitions by removing bottlenecks and inefficiencies throughout the entire lifecycle. This is evident in Auterion’s work in streamlining, automating, and securing end-to-end data integration from the point that data is captured by the drone to the point it is archived.

“We need to change the way we think about data transfer so that it can become a much more efficient, integrated process,” emphasized Durscher. “Looking at this in terms of ROI, if we can make something faster, more effective, safer, and secure while collecting better, accurate data in a predictable, standardized, repeatable way, it’s almost impossible for a company to not see the value. This is what we are achieving now at Auterion, we’re in the process of obtaining these ROIs in a meaningful way.”

According to Durscher, realizing ROI is not a static process, and the industry needs to be agile enough to adapt to current and future needs. As businesses grow and scale, risk mitigation standards evolve, and regulations change. The drone workflow needs to change with it. Open source and open standards are some of the solutions that are uniquely poised to meet this level of data and workflow integration agility.

“Because we are focusing not just on open source, but also on open standards, we are creating an ecosystem that is more impactful for end users,” explained Durscher. “We want to make it as easy as possible for an end user to use different Auterion powered drones by building one interface, one workflow—this is what gets us away from thinking of data on an SD card—to seamless transitions between platform and payload into established workflows. We want to be more hands off in regard to data and reduce the tasks that need to be performed to get data from point A to point B.”

Auterion continues to work on making data even more accessible and actionable. One of the ways that they see this happening is through leveraging emerging technologies like edge computing and machine learning/AI to bring attention to the data that matters.

“If you look at data today, I would say that about 80% of that data is of little to no use; it is that 20% that has the real value,” explained Durscher. “But that other 80% is still part of the entire dataset. How can we get to the point where we provide only the actionable 20% of that data? Otherwise, we’re giving individuals too much data to digest and process. This can make a huge difference in emergency response where seconds matter, or in inspection, where the area of interest may only be small—they both need to see what matters quickly. What if we can give them that 20% of critical data? That, in my opinion, is the future of enterprise data.”

As the drone industry grows (as it is predicted to do), so will the data and the more we can drill down to what matters the more valuable we, as an industry, will become. We must think critically about how we move data through everyday workflow processes to deliver meaningful value at scale, regardless of platform. Industry-leading companies like Auterion are working on building the ecosystem to achieve this and will help define the future of unmanned data-collection systems.

To find out more check out Auterion’s webinar “End-to-End UAV Data Integration & What the Future May Hold“ on-demand or visit their website.