Using Drones to Monitor Volcano Activity and Save Lives

We've seen an incredible amount of new applications for small unmanned aerial vehicles (sUAV) over the past 24 months, and those range from drones that can plant trees by firing seeds into the ground to UAVs that can pick up and carry objects, but some of the most important innovations for the technology are happening in the first response and search and rescue (SAR) sector.

Swimmers in Australia have been rescued by a drone dropping a life-saving device from above. More and more fire and police departments from all over the world are adopting, integrating and deploying UAV platforms into their day-to-day workflows. Using drones to support remote sensing data acquisition requirements might not seem like an application that is especially relevant in the context of first response, but the U.S. Department of the Interior (DOI) recently showcased just how essential the technology can and will be when it comes to monitoring emergency situations, spotting victims and dispatching manned vehicles to perform rescues in a quicker and more efficient manner. 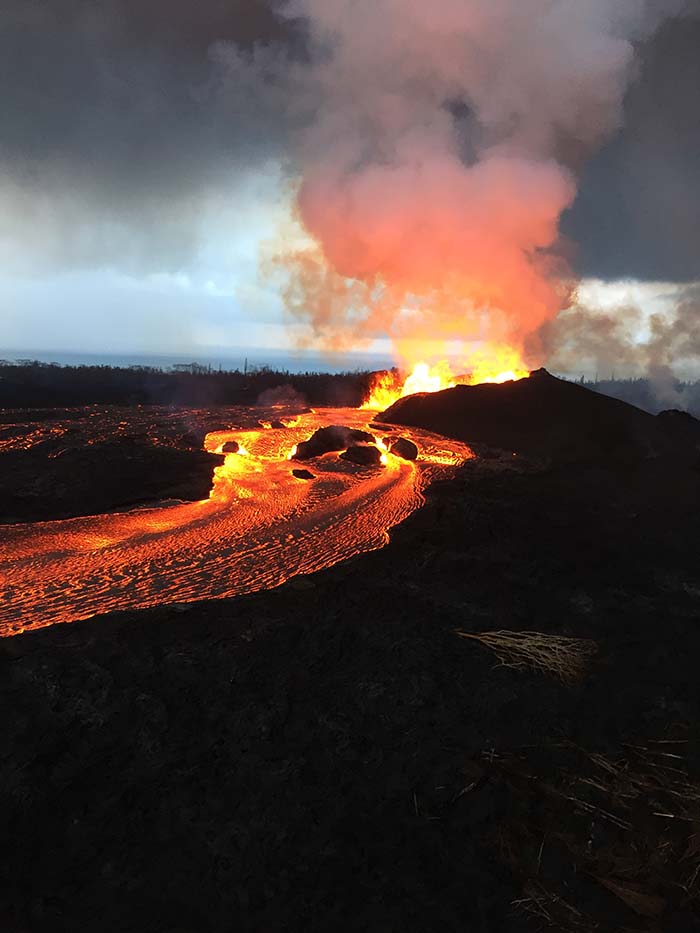 Last month, the DOI deployed UAVs to support the remote sensing data acquisition requirements for the monitoring of the Kīlauea Volcano eruptions in Hawaii. This effort was coordinated with various teams of sUAV operators from the USA Geological Survey (USGS) and their own DOI Office of Aviation Services.The teams monitored volcanic activity using thermal video imagery and on-board gas sensors. Additionally, the teams assisted the local county and fire emergency managers in support of monitoring lava movement toward the Puna Geothermal Venture Hawaiian Electric Plant. In response to changing mission demands, DOI sUAV payloads were adapted and reconfigured to provide periodic assistance to local emergency managers, including investigation of lava-surrounded communities for potentially-stranded people and delivery of live video feeds of lava flow conditions/paths to the Emergency Operations Center (EOC) in support of emergency evacuation efforts.A few days after that deployment, the DOI sUAV response team was conducting mapping missions to monitor lava advancement rates and direction toward the highway and populated areas. The team then launched a drone to assess the area in the northeast corner of Leilani Estates and identified a new outbreak of lava that was very rapidly moving into a residential area.The team notified the EOC and field operations of the flow and the urgent need to evacuate the area.  The team also began providing live video coverage of the flow's progress to emergency officials in the EOC, who dispatched police and fire units to clear residents off the street. The sUAV team continued to provide live coverage of the breakout, and EOC personnel were able to use the information to guide evacuation actions, including dispatching an emergency alert notification to anyone in the area.During the preflight, the sUAV team overheard radio transmissions that a civilian was trapped at their residence. The team confirmed the location of the residence and flew into the area to assess if they could be of assistance. The individual was spotted and instructed to "follow the drone to safety". The individual began moving through the jungle toward the street where the drone was hovering. While the individual was making their way through the jungle, the sUAV team was able to track him visually (he was using a cell phone flashlight) and information about his location was relayed to the ground searchers. After about 10 minutes of providing direction information to both the stranded person and the first responders, the search team was able to make contact and guide him to safety. The sUAV team stayed onsite until the crews were clear of the area. The UAS team, field operations, and EOC worked the situation for 2.5 hours.In addition to the SAR mission, the sUAV team was able track the rate of advancement of the lava flow along the affected street. They also provided real-time information to field operations and a live video feed to the EOC regarding the rate and direction of the flow as well as any structures destroyed.We've detailed what it has meant for the DOI to measure the success of their drone adoption, but this application demonstrates the real world ramifications of what doing so can mean. Seeing them use drone technology for so many purposes in one setting reveals what's possible when the technology is being utilized in a deliberate manner, as the coordination between field ops, the ground searchers, dispatch, the EOC and the DOI sUAV team was very effective. It proves, once again, that drone technology can be leveraged in active emergency situations to save lives and provide valuable insight into a developing incident scene.Regardless of how long it takes to see wider adoption in this sector, this surely won't be the last time we hear about instructions to "follow the drone to safety".