Dealing with public perception of drones, especially when they are used by law enforcement, can be a logistical minefield. Misunderstandings about the use and purpose of drones employed by law enforcement agencies or pilots can quickly balloon out of proportion. And, as we saw several months ago with the news about the Colorado Drone Swarms, media can sometimes amplify already established fears and concerns causing an even greater response.

The most recent example of this has been seen with the Chula Vista Police Department. Inaccurate information claiming that the department was using drones to “enforce” lockdowns quickly took on a life of its own, which led to the department issuing a press release on social media addressing the issue. 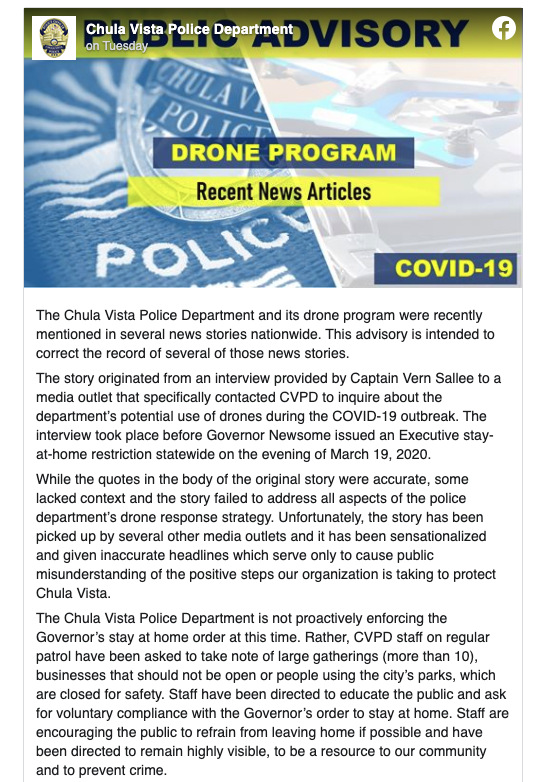 The press release essentially clarifies how they are looking to use drones during the crisis and states that the Chula Vista PD's drone as a first responder program was not planning to use drones for patrols or to enforce stay-in-place orders. And to the best of my knowledge, no police or emergency response drone program in the United States has ever used drones for patrolling or surveillance purposes to actively seek out crimes and enforce the law. And this is an important distinction to make, as many of the public's fears are fueled by the idea that they are being watched without consent.

In a recent interview with Captain Vern Sallee of Chula Vista PD, Commercial UAV News talked about ways that Chula Vista is already utilizing drones and how they may deploy them in response to COVID-19 if they obtain FAA approval.

“These operations have been going on for quite some time and Chula Vista PD is really the only police department in the nation that’s using a drone as a first responder,” explained Sallee. “We have fully integrated drones into police operations seven days a week to give real-time information to officers. Now we find ourselves in unprecidented times with the coronavirus outbreak, and drones are more critical than they’ve ever been in the history of our agency. We can use them for situational awareness not only for calls for service but to also ensure our officers know when they are going to be going into a crowd so that they can take the necessary precautions. Also, if this virus spreads, it is invariably going to impact every organization in our city. We actually had a council member who contracted the virus last week and is now in critical care. If our officers contract the virus, even if it isn’t serious, they’ll have to be quarantined for 14 days, which could rapidly deplete our staff—drones can be a force multiplier to help keep the public safe and to continue to communicate with the public.”

The Chula Vista PD is particularly aware of how drones can be a force multiplier for public services; they have been working within the FAA’s IPP program since 2018. While in the program, they have been exploring ways that drones can act as first responders to aid police offers in the line of duty to get better information and situational awareness before arriving upon a scene. This is making a significant difference in response times and decision making. For example, if you were in a car accident and were critically hurt and called 911, it could take a police officer a lot of time to get to you due to traffic and distance. Additionally, they may obtain an accurate picture of what happend or what they will need until they get there, which may require calling in additional resources. This, in turn, would take additional time—time someone who is critically injured may not have. Alternatively, a drone that is stationed strategically throughout the city can get to you in minutes and provide the police with a detailed picture of what is going on. While they are driving to the scene, they can develop a plan, ensure they have the right equipment and personnel with the right skills, and can call ahead to the hospital. This is just one hypothetical example, but thanks to the IPP program, Sallee is able to  provide multiple real-life scenarios where drones have made a measurable difference for the Chula Vista PD and its citizens.

By virtue of being in this program, Chula Vista is uniquely situated to explore and test procedures that can eventually help law enforcement make better decisions and, in this particular crisis, practice social distancing while still serving some of Chula Vista’s most at risk populations.

“The governor has noted that the homeless population is particularly vulnerable to this virus,” stated Sallee. “The governor’s goal is to open up the shelters and get the homeless out of those canyons and off the streets to curb the spread of the virus through these vulnerable populations. However, they are a tough population to serve. Because we have a lot of urban canyons in our city that have encampments, they can be difficult to get to and find. I’d like to avoid sending officers into these areas, which can have difficult terrain and unknown hazardous conditions. Something we haven’t really ever done before, but realized it could be a tremendous asset today toward keeping our officers safe, is the use of speakers on our drones to communicate with these populations. Using drones as a communication tool can give us a tremendous advantage by helping us increase public and officer safety, while still communicating critical messages to the population, such as asking them to leave the canyons to get these critical resources that are available to them.”

As much as homeless populations are particularly vulnerable, public servants and people performing critical services like law enforcement, healthcare, food services, and postal deliveries are also proving to be at high risk. It is the vulnerable serving the vulnerable. The more we can facilitate the safety and health of people performing critical services through social distancing via drones and other technologies, the more likely these important services will be able to continue to support the community without becoming overburdened, overwhelmed, or worse. This is why it is important to support the efforts of IPPs, like Chula Vista PD, who are testing and developing processes and procedures to address the dangers of COVID-19, so that we can learn from these test cases how to better protect our vulnerable populations globally.

To learn more about what Chula Vista has accomplished since 2018 through the FAA’s IPP program, read this in-depth article by Captain Vern Sallee, which was originally posted by Police Chief Magazine here.