During small or large public events, safety and security are important subjects to take into consideration. As first responders and security organizations start integrating drones into their workflows and tactics, reliable solutions become a necessity. Recently, Atlas Dynamics used the AtlasPRO UAS to help the Military Police of Rio de Janeiro State (PMERJ) to secure the Copa America soccer tournament.

We've explored how Atlas has enabled fully autonomous drone operations, but by providing users with a constant eye in the sky in a cost-effective way, the company has opened up an entirely new value proposition. The AtlasPRO helped the PMERJ to monitor the perimeter of the Maracanã Stadium, one of the largest stadiums in South America, during the tournament’s final series. With the help of 3 drones on the premises used before and after the game, the PMERJ was able to search for anomalies and gather additional information that the local forces defined. According to Atlas, this marked the first instance in which MESH multi-drone UAS technology has been approved for usage to secure a major sporting event.

“As the force responsible for ensuring the security of the residents of Rio and the Copa America tournament, we were determined to use the most advanced technological capabilities available on the market to serve our mission needs,” said Colonel André Batista, Commander of the Choque Special Forces. “Deploying AtlasPRO helped us guarantee security for the Copa America tournament efficiently and cost-effectively.” 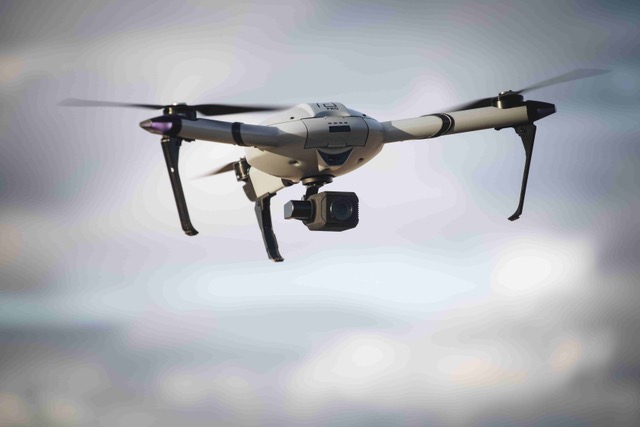 The AtlasPRO enables fully and semi-autonomous missions with a high endurance of 50 minutes of flight time and a range of 10 km. By using the AtlasMESH Multi-UAV Communication System, the drone features multi drone hot-swap, which allows users to define a point of interest on the AtlasOS, and send the first drone to fly above it. When the first drone reaches 25% battery, it sends a signal to the second to take off and replace it above the target.

“MESH multi drone operating is the next big thing, “ Ivan Tolchinsky, CEO and Founder of Atlas told Commercial UAV News. “There is just so much one can do to optimize current batteries using design and innovation in energy consumption. One of AtlasPRO advantages — and the iconic look — is derived from its design that optimizes energy consumption, which allows us to reach 50 minutes of flight time. But MESH allows us to get much more out of the system by enabling continuous eyes-in-the-sky and hours in the air, be it for one mission or several. This feature changes the paradigm of endurance — it doesn't matter if we fly 45, 50, or 60 minutes anymore, as MESH enables us to have a constant eye on the target for hours from the same operator and the same GCS.”

Similarly to SPH Engineering’s UgCS Command & Control, the AtlasMESH system also allows sending real-time data from one drone to numerous screens, including GCS tablets and smartphones, allowing operators to easily share data with the forces on the ground. Additionally, AI-based computer vision helps to identify pre-learned objects and alert users when the drone detects them, preventing the need to have the operator search for them on the screen.

As a provider of tactical and autonomous UAS, Atlas Dynamics “wants to power first responders around the world with high-caliber, cost-effective, end-to-end UAS solutions that provide timely, accurate data and help save both lives and money,” Tolchinsky said.

“First responders are, in fact, early adopters of such technology, as they are already aware of the unique value Unmanned Aerial Systems can provide: unique and important data that saves lives, received in a fast, affordable and — most of all — safe way,” Tolchinsky added. “First responders frequently approach us, and we are happy to work with them to assist them with their important work. As a highly customer-centric company, we learn a great deal from our first responder customers, and often implement their recommendations in our solution. They come with so much field experience, and our drones complement it, allowing them to perform better.”

Currently, the EU based company is expanding to the U.S. market, bringing its MESH technology to the American professional user, and has several exciting technological innovations and strategic partnerships planned for the future.