Today the value of drone thermal imagery is being demonstrated in a number of compelling ways. For instance, according to DJI’s Drone Rescue Map, 776 people over the course of 444 rescues in 36 countries worldwide have been saved by drone technology, many of which were equipped with thermal cameras. Adoption of thermal technology in applications such as surveillance, and solar farm, and utility line inspections continues to grow.

Despite growing adoption, there are still a few limitations in the capability of thermal imagery on drones.

One of the current challenges with industrial drone payloads is the relatively limited ability to zoom while maintaining a clear image. Due to a combination of size, weight, cost, and technical complexity, existing industrial drone payloads use thermal cameras with purely digital zoom, which essentially is just magnifying the same pixels, making the zoomed image blurry and difficult to read. This limitation requires drone operators to either fly closer to assets to get a clear image or try to translate blurry images, putting assets at risk, increasing the likelihood of false positives, audibly announcing the presence of the drone in public safety missions, and other complications. These are some of the key reasons why Teledyne FLIR came out with the Vue® TZ20-R. 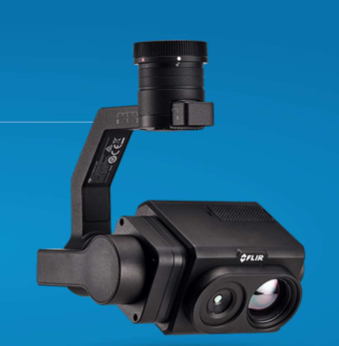 Equipped with dual radiometric Boson® thermal cameras, the IP 44 rated, U.S. manufactured, Vue TZ20-R has both a wide and narrow angle field of view (FOV) camera enabling up to 20x zoom with four times more pixels on target at all zoom levels compared to existing products. The wide FOV provides situational awareness. By providing a narrower FOV camera, drone operators can start with a higher concentration of pixels before zooming, allowing for a significantly crisper zoomed image.

What Does a Clearer Thermal Image Mean for Emergency and Surveillance Services?

For emergency service applications, a wide field of view can help identify items of interest faster, and a proper zoom can help confirm you are looking at a human during a search and rescue operation, speeding up a time-sensitive process. A clearer view can also help with the use of radiometric isotherms, the ability to set your camera to look for specific temperature ranges within a field of view. When isotherms are set properly, they can be used to help rescuers quickly find people who are lost.

Getting a clear look during a search can also help law enforcement and first responders determine the risk level of a situation and the appropriate response. Being able to view from a farther distance provides law enforcement with situational awareness without drawing attention to the drone or their presence, which can escalate risk. This same value is just as important for surveillance applications, where being able to scan a wider FOV enables security to track and identify potential threats to assets and see what is going on more clearly. 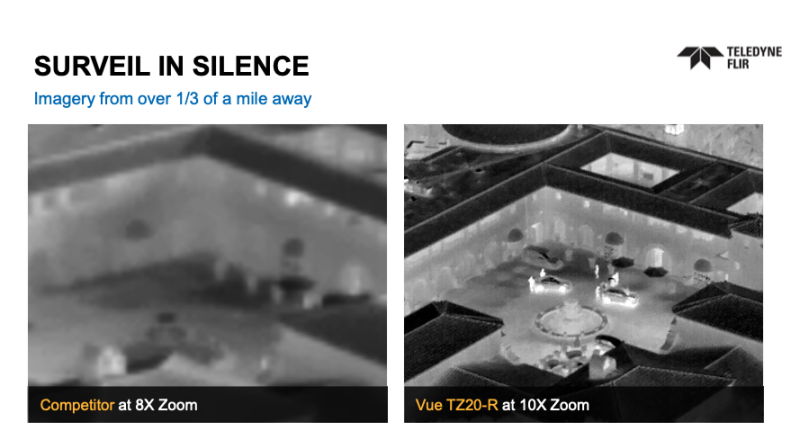 Getting a Clearer Image and Reducing Risk in Industrial Inspection Applications

For industrial applications, being able to fly farther away from assets and still get a clear picture is a matter of safety and efficiency. Because digital zoom tends to make the image blurry, drone pilots need to fly relatively close to get a clear image of what they are inspecting. The closer a drone flies near an asset the more risk the drone could impact operation. Being able to fly at a safer distance and still get a clear image of what is being inspected strikes an important balance between safety and data usability. Clearer imagery also provides the client with a more effective, attractive, and useful report.

When using isotherms, the same clarity that can help rescuers detect lost humans during a search and rescue can help speed up solar farm, utility, and other types of similar inspections by identifying when critical components are operating outside of defined operational temperatures. Spot meters and regions of interest can also be used to document surface temperatures of interest.

The effectiveness of drone applications often come down to the quality of the sensor being carried. As sensors for drones become better, more companies adopt the technology and find new use cases, especially as software is developed to support data processing workflows like the FLIR Thermal Studio. FLIR Thermal Studio supports thermal data workflows by enabling batch processing to edit large numbers of images, developing custom reports, and georeferencing data with live map views to indicate where images were taken for quicker response times. 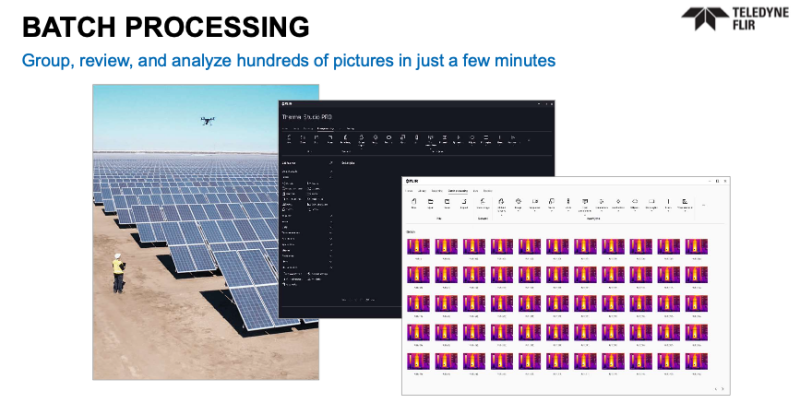 This ability to better process data, along with clearer imagery, makes thermal radiometric zoom an exciting avenue for the future of drone technology.