Although individual drone capability is reaching maturity, we still face major challenges to increase functionality in uncrewed aircraft system (UAS) applications. Arguably the most complex challenge is public acceptance – it’s at the forefront of every discussion we have involving use-cases and commercialization.

UAS applications promise significant rewards for ambitious innovators, but the question remains, how does the industry accelerate public acceptance of the use of drones to bring about commercial viability? And will the value this brings transform the perception of autonomous robotics more broadly, from that of fear of the unknown to one of trust?

It was asking ourselves these questions that drove us to conceive a whole new concept for collaborative unmanned aerial vehicle (UAV) operations. Our thinking from the get-go was clear: single ship UAV operations just doesn’t cut it. Benefit will only be achieved by progressing towards a team construct that increases synergy, performance, and efficiency of operations. Essentially, we want to up the way UAVs are used, resulting in decentralization, self-organization, resilience, operational flexibility, and environmental sensing.

We struck on the idea of an ‘empathetic squadron’ – a collaborative force of UAVs with a dynamic hierarchy of command and control, proven as a very effective method across all types of highly complex operations. We believe this model has the capacity to form an operational fleet of UAVs that is far greater than the sum of its individual parts.

The use of UAVs for commercial applications is rapidly becoming one of the world’s fastest growing industries. Success is predicated upon both commercial viability and public acceptance, which can be accelerated if the ecosystem is seen as reliable, safe and trusted.

Drone usage initially began as a three-dimensional extension of human applications, and ultimately added to the cognitive load of the operator. The dream is to advance the industry to be fully automated, integrated, and autonomous. This could see autonomous vehicles across all domains, including air, land, sea – and we envision this as a phased journey, with a need to mitigate inherent risk across a range of complex challenges.

The standard UAS mission model is a semi-autonomous drone with autopilot, which can takeoff, land, navigate and avoid obstacles. This model requires a digital connection and oversight from at least one human operator. Mitigation strategy typically includes automated action to land or return-to-base if something goes wrong, such as loss of GNSS signal. The current model of deploying homogenous drones, which work identical to and independently of each other is inefficient, lacks adaptability, and is limited in use cases.

And that fact brings us to the crucial point – could our collaborative model of UAVs enhance mission execution synergy by accomplishing more in less time, and in a safer manner than the way humans and drones currently do? For example, if a critical component malfunctions, such as a communications link with the ground control station, the squadron identifies another member of the flight to directly link to the degraded drone and provide the necessary information to continue. Straightaway, the advantages of the model become clear. Complementary and redundant capabilities, an understanding of each team member’s status, and improved robustness means better mission success rates for service providers, while the additional safety measure makes the model more appealing to regulators and will lead to greater social acceptance.

The empathetic squadron concept is highly efficient because the members have discreet roles, responsibilities, and varying capabilities. Even the smallest team of two drones in the squadron can realize efficiencies when both members are properly matched and task-organized. In addition, onboard artificial intelligence (AI) can enable each drone to monitor its situation and communicate progress, local insights and health levels to each other. This distributed intelligence enables the drones to respond to others in the squadron, identifying and compensating for risks when any member experiences technical issues or loses communication.

Empathetic squadrons have the ability to respond to dynamic environments and changing mission requirements. They can adaptively create scenes of varying fields of view and use AI to create situational awareness from synthetically generated imagery. For example, drones can spread out geographically to capture images of a scene, then create a synthetic image of varying sizes and resolution depending on requirements for the use case at hand. This distributed intelligence offsets the dependence on complex centralized data processing, reducing latency and energy consumption, both of which are critical determinants of performance.

Our premise is that this approach is already tried and tested in the sphere of human endeavor. It is proven by decades of in-flight experience, in highly complex environments including experimental flight testing and helicopter-borne shipboard replenishment, which encompasses a wide spectrum of human physiology, situational awareness and highly coordinated multi-aircraft flight activities. We firmly believe this can be applied to UAV operations, with continued advancements in AI, smart platforms, and extended battery life key to making it all happen.

Our inhouse digital service innovation (DSI) team is central to the concept development. DSI will be responsible for the macro integration of the UAV mission into the overall business and human benefit – why a flight takes place, essentially. But DSI also provides the logic of how the fleet makes decisions, while considering the pivotal relationship between data and computer processing, vehicle and cloud, to ensure that the mission succeeds.

Comms is of course vital to allow the inter-squadron collaboration… from squadron to mission control and from squadron to the recipient of the service. We envision a multilayered approach to ensure resilience using short range, terrestrial and satellite communication interlock. AI will be instrumental in detect and avoid, allowing the drones to sense themselves and negotiate their operating environments. Our teams are developing the algorithms that will cope with the ever-changing complexity and unpredictability of mission environments.

There’s a lot to get done, but the multidisciplinary team here at Cambridge Consultants is excited by the potential of the concept, and the prospect of bringing it to life. The UAV squadron we’re proposing will be a truly, multi-tasking force, doing the work to an order of magnitude greater than humans can currently achieve. Shared technology loads across multiple drones, one vehicle acting as the relay for another, in-flight charging, multiple drones each with complementary functions, tools as part of a complex task… the list goes on.

The principles I’ve been discussing here have the potential to be applied much more widely. I touched on this topic, along with several other aspects of autonomy, in a recent panel with Commercial UAV News – Have We (Finally) Achieved Autonomous Operations for Drones – which can be viewed on-demand here 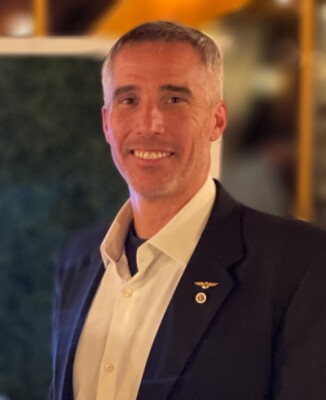 Christopher Bourbeau is Vice President, North America Aerospace, for Cambridge Consultants. In this role, Chris helps companies achieve complex breakthroughs through the intersection of technology innovation, end-user requirements, and customer business growth. Chris has over 25 years of military, defence, and commercial aerospace experience ranging from serving on the front lines as an end-user across land, air, sea, and space domains to developing business strategy for some of the world’s leading technology companies, focused on gaining value from advances in manned and unmanned integration of ground and air robotics, artificial intelligence, sensor fusion and autonomy. Chris holds an MBA and BSC in Technology Information Systems Management.