We’ve talked about how power just might be the bottleneck of the drone industry since the logistics associated with covering large areas for mapping or inspection purposes means a drone is going to need to stay in the air for a decent amount of time. While advances are being made in terms of increased battery power, one company is looking to change the topic entirely by rolling out the first autonomous wireless charging pad for drones. 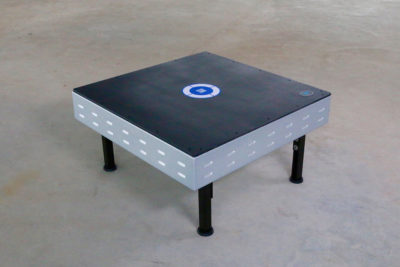 WiBotic has announced the WiBotic PowerPad, a completely integrated wireless charging pad for drones. It supports a wide variety of drones, from large industrial UAVs to smaller commercial and enterprise drones. The PowerPad can be easily mounted on rooftops and other elevated structures as well as inside warehouses and factories. Most importantly though, it allows operators to work completely autonomously, meaning there is no need for human intervention for routine maintenance, charging or manually changing out batteries.That distinction is an important one, and is a key factor in the development of the product. Feedback from actual users is something Wibotic considered is great detail, as they’ve been hearing from users about the costs associated with manually changing out or charging batteries.“Nearly every drone service provider is currently working on a system for repetitive autonomous flights,” Matt Carlson, VP of Business Development at WiBotic, told Commercial UAV News. “Apart from regulatory hurdles, the primary cost barrier for these systems is the cost of a human presence for battery charging or swapping.  The model for repetitive flights over a specific area or for rapid response to an event simply doesn’t work if a human being has to be onsite to maintain battery charge.”The specific commercial applications that this technology can enable are numerous, and Carlson mentioned large oil fields such as those in Texas or California are a great example. There are hundreds of square miles of dense piping networks that need to be inspected on a regular basis, and WiBotic PowerPads could be positioned to service multiple drones along a “drone highway” in remote areas and ensure these operations can be carried out in a cost effective manner.The weather resistant pad could change the way operators think about how they can approach visual inspections, indoor warehouse inventory management and plenty more commercial applications, but what’s really exciting to consider is how this might influence the way in which a fleet of drones operates. This development could open up a whole new perspective around how autonomous drones work and function, and it’s something the Wibotic team is already thinking about.“Today, most drone flights are performed by a single operator using a single drone,” Carlson continued. “The operator typically brings multiple batteries to extend flight time and complete a one-time job. This situation limits the persistent/repetitive uses for drones.  In the long run, though, any persistent use of drones will require a method to keep those drones charged.  As drone flights become more repetitive, the use of multiple drones (fleets) will inevitably be required to cover large areas. Once again, an autonomous charging system that also monitors and tracks the health of large numbers of batteries will be critical to making drone fleets a reality.”WiBotic also announced a new lightweight and compact version of its onboard charger for use on drones and small robots. Operators of smaller drones and robots will be able to take advantage of the benefits of wireless power without being bogged down by excess weight.WiBotic will be showing both new products in booth #232 at the upcoming Commercial UAV Expo in Las Vegas, NV, October 24-26, 2017.  Anyone interested in discussing WiBotic PowerPad, the new lightweight onboard charger, or any other WiBotic products, are invited to visit the booth.