New at Intergeo: the UX11 from Delair-Tech

Last year at Intergeo, one of the bigger announcements was centered around Delair-Tech’s acquisition of Gatewing. It proved to be an early example of a development in the drone industry that we’ve seen take shape in a big way this year, and it served as a great example of the kind of potential that resides in these sorts of acquisitions. At Intergeo this year, that potential is being realized in a literal way with the announcement of the UX11. 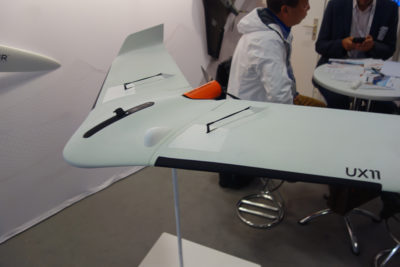 The UX11 is a fixed wing drone designed to be easy-to-use and also stay in the air longer than other models. Geospatial professionals can use it to cover 520 acres of ground at 1.7 cm GSD in a single flight at 122 m above ground level. It has a flight time that is just short of an hour. However, the key new feature for the UX11 is the connectivity that has been enabled for this drone via 3G or 4G.“We have more than 100 dealers through the Gatewing acquisition, and we conducted a survey with them to find out what sort of features they wanted to see developed for future models,” Benjamin Benharrosh, co-founder at Delair-Tech, told Commercial UAV News. “It was something that had been in the works under Gatewing, but that information allowed us to clearly see the market for this capability, which is part of the reason we finished developing it.”Operators can use the UX11 to map large areas faster and perform precise takeoffs and landings. The drone has a camera that has been specifically designed by Delair-Tech to be utilized with this drone, and the analytics that are available include ortho image & DSM, contour lines, cross sections, stockpile volume calculation and many more. The 3G/4G connectivity also means that the drone has BVLOS-ready communications.We’ve previously talked with Benjamin about what it means to his company to access Trimble’s network of preferred providers, but it’s a more recent partnership that will open up even more opportunities for users. Intel has chosen Delair as a strategic partner in the development of the Intel Insight Platform, which means this offering is that much closer to a complete drone solution.The concept of a “complete drone solution” is one that comes up over and over, as many UAV manufacturers are pushing to provide their customers with a drone solution which they don’t have to configure for themselves and can easily adopt. This development allows Delair-Tech to offer that exact type of solution.To learn more about the UX11, click here.

How Easy is it to Integrate the UX11 Drone Into a Professional Mapping Toolkit?

The UX11 is the Ultimate Drone Solution for Geospatial Professionals