It was just in April of this year that the first drone airline became a reality when the Federal Aviation Administration (FAA) granted Part 135 certification to Wing, a Google company, for non-scheduled deliveries of goods. This move created the first de facto unmanned airline in the USA that seemed as if it would define what drone delivery would look like for the entire industry. As it turns out though, that was just the beginning.

UPS Flight Forward Inc., a subsidiary of UPS (https://www.ups.com/) today announced it has received the U.S. government’s first full Part 135 Standard certification to operate a drone airline. The company will initially expand its drone delivery service further to support hospital campuses around the country and to provide solutions for customers beyond those in the healthcare industry. In the future, UPS Flight Forward plans to transport a variety of items for customers in many industries and regularly fly drones beyond the operators’ visual line of sight.

The FAA awarded UPS Flight Forward a Part 135 Standard certification on Friday and the UPS subsidiary immediately launched the first drone delivery flight by any company under Part 135 Standard at WakeMed’s hospital campus in Raleigh, N.C. That flight, using a Matternet M2 quadcopter (https://mttr.net/), was flown under a government exemption allowing for a beyond visual line of sight (BVLOS) operation, also a first in the U.S. for revenue-generating delivery.

UPS has proven the need for drone delivery in healthcare operations, where the shortest time in transit can improve efficiency and help healthcare professionals serve their patients better. With its Part 135 Standard certification, UPS is ready to build on this application and expand to a variety of critical-care or lifesaving applications.

“This is history in the making, and we aren’t done yet,” said David Abney, UPS chief executive officer. “Our technology is opening doors for UPS and solving problems in unique ways for our customers. We will soon announce other steps to build out our infrastructure, expand services for healthcare customers and put drones to new uses in the future.”

The FAA’s Part 135 Standard certification has no limits on the size or scope of operations. It is the highest level of certification, one that no other company has attained. UPS Flight Forward’s certificate permits the company to fly an unlimited number of drones with an unlimited number of remote operators in command. This enables UPS to scale its operations to meet customer demand. Part 135 Standard also permits the drone and cargo to exceed 55 pounds and fly at night, which restrictions that governed earlier UPS flights. 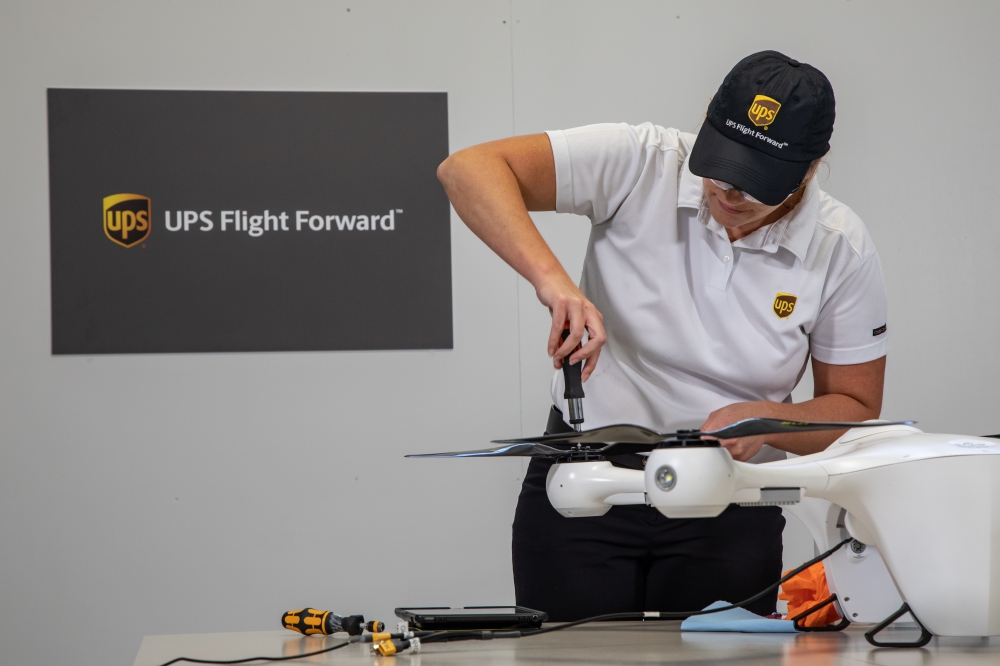 “UPS Flight Forward is benefitting from our knowledge as one of the world’s leading airlines,” Abney continued. “The Flight Forward organization is building a full-scale drone operation based on the rigorous reliability, safety, and control requirements of the FAA.”

UPS has worked hard over the past few years trying to demonstrate the feasibility of the drone delivery business model. They have tested drones for urgent commercial deliveries over water in Europe and also funded and supported humanitarian deliveries in Africa Additionally, they’ve tested non-urgent commercial residential delivery in rural areas with drones launched from a UPS package delivery car.

“This is a big step forward in safely integrating unmanned aircraft systems into our airspace, expanding access to healthcare in North Carolina and building on the success of the national UAS Integration Pilot Program to maintain American leadership in unmanned aviation,” said U.S. Secretary of Transportation Elaine L. Chao.

UPS also has provided input to government regulators responsible for establishing rules for safe drone operations in the United States. A UPS senior executive has served since 2017 as one of a select group of corporate advisors on the FAA’s drone advisory committee.

UPS Flight Forward is forging paths to create innovative new services for customers. Part 135 Standard certification enables UPS to integrate drones into the UPS logistics network, creating for new applications in many industries. The company has a long-term plan with important milestones in view. These include:

Based on this development, it likely won't be long before we see FEDEX and the United States Postal Service (USPS) receiving similar certifications. That could directly impact how soon the FAA updates regulations to allow BVLOS operations and flights over people.

With each new Part 135 certification, we get that much closer to the day when deliveries being made by drones are the expectation, rather than the exception. These deliveries will by and large be that much quicker than traditional means, opening up all sorts of economic opportunities while making a huge difference in life or death situations.