Stereographic Mapping and Drones: Taking UAS Mapping to the Limit

McKim & Creed is an employee-owned engineering, geomatics and planning firm with nearly 500 employees in offices throughout the United States. They’re one of the top design firms in the country, and they’ve showcased where and how drone technology is making a difference compared to conventional survey methods as well as how drones are advancing civil engineering and surveying.These sorts of real-world results are going to be on full display at the “Stereographic Compilation: An Accuracy and Feasibility Study” during the upcoming DJI AirWorks event. There, McKim & Creed and Cardinal Systems will discuss and detail whether you can accurately and consistently stereo compile from an inexpensive UAS system and what kind of accuracies should be expected from doing so. However, the insights that the presenters will showcase are going to be as much about process and standards as they are pixels and points. 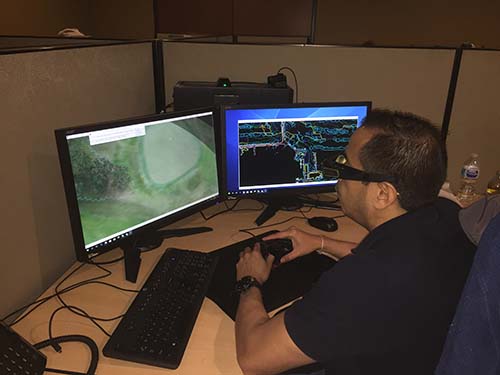 Stereo Compiling from an Inexpensive UAS SystemMcKim & Creed currently has close to 20 pilots and they continue to add pilots every month. They’re flying drones several times a week throughout the company and continue to find new project types and applications. That doesn’t mean the company’s adoption of the technology was a totally smooth or seamless process, though.Christian Stallings, R & D Manager and Pilot at McKim & Creed, has been involved with and taken the lead on many of the company’s projects that utilize drones, but in the process of doing so has faced difficult and daunting challenges when it comes to adapting those technologies for specific engineering, mapping and surveying uses.“One of the greatest challenges I have seen, specifically with unmanned systems, is the lack of understanding of best practices and standards on the part of the hardware and software vendors,” Stallings told Commercial UAV News. “Many of the challenges that these vendors have experienced in our market are directly related to this. I would strongly encourage these companies to devote a considerable amount of time to really understanding how we work to tailor solutions to our industry, instead of trying to change the way we work or the products we create.”The standards professionals like Stallings are dealing with have existed for a long time and the integrity of the products and services his company offers need to be protected. It’s one of the reasons the stereoscopic solutions from Cardinal Systems resonated so much with him. Their tools are designed to make humans as efficient as possible, and their drone stereo compilation approach is a good example of that efficiency, but the reason their solutions have been able to have such an impact is because they’re driven by purpose, rather than potential.“Most of the issues I’ve seen come from trying to force the use of a specific tool that isn’t suited to the job,” said Orrin Thomas from Cardinal Systems. “People get over excited about a technology and try to use it before it is proven, or for something for which it is ill-suited. In a sense that is failing to ask the right questions, but I describe it more as picking the solution before defining the problem.”The VrTwo and VrThree Modules from Cardinal Systems allow for true 3D viewing, vector collection and editing from stereo images and point clouds. It’s a difference that made sense for McKim & Creed because it allowed them to use UAS mapping to the limit of what is possible with a simple RGB sensor. That difference stems from a recognition of how this drone stereo solution would impact their needs. Such considerations directly factored into how their UAS operation grew. How to Grow a UAS OperationThere are several major catalysts to the growth for the pilot team, projects, and fleet at McKim & Creed, but regulation has been their biggest challenge. When they were flying under Section 333 exemption, the barrier was much greater, but the introduction of Part 107 opened up their ability to cross train their staff to operate unmanned systems. However, it also opened up a whole new set of challenges.“Outside of regulation, our biggest challenge has been the willingness of our clients to adopt these services,” Stallings explained. “From the beginning, it’s been very important to deliver the same products that clients are used to, at the same specification and accuracy requirements.”That focus on specification and requirements is why McKim & Creed grew their UAS operations organically, relying heavily on repeat business by gaining clients’ trust and creating consistent products. That led to the ability to standardize their fleet and services by using tools that make sense to civil engineering and geomatics firms.If that sounds like an involved process, that’s because it is. No matter how much users and organizations might ask about and try to find an “easy button” drone solution, there’s really no shortcut to success with this technology.“We’ve demonstrated that a new low-cost tool can make surveyors more productive for a variety of tasks,” Thomas continued. “I see the biggest hurdle as the learning curve. Push-button systems have been oversold and created an unrealistic expectation of ease. Just as in conventional surveying, doing good work requires effort and competence. Regrettably, there is no shortcut to competence; there is a toll to be paid in some combination of education and experience.”That combination of education and experience is exactly what’s going to be highlighted by both Stallings and Thomas during their Stereographic Compilation: An Accuracy and Feasibility Study session. An Accuracy and Feasibility Study at AirWorks 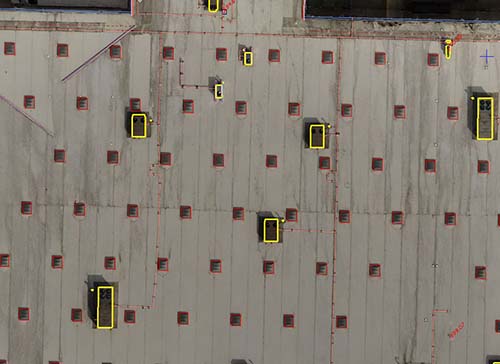 A rooftop survey using this stereo composition method. McKim & Creed were able to accurately survey all the rooftop features including the small gas lines and electrical boxes for all the roof top units (RTU)

At the DJI AirWorks event, Stallings and Thomas will explore the success of drones and mapping by breaking down how stereo composition has taken UAS mapping to the limit. In doing so they’ll specifically answer whether you can accurately and consistently stereo compile from an inexpensive UAS system. For their test, that inexpensive system is a DJI Phantom 4 Pro with a standard configuration and a DJI Inspire 2 with a Zenmuse X4S and Airgon Loki PPK system.Considerations around hardware will be just one of the topics they discuss, but Stallings noted how considerations around what can be utilized for such projects have changed in recent years.“It’s important to have strong standard operating procedures, as well as reliable hardware that is purpose-built,” Stallings said. “The hardware market has caught up quite a bit in the last few years, which has simplified this task.”The benefits of stereo compilation are varied, but one potential benefit that will be specifically detailed is photo interpretation. Humans routinely misinterpret 2D images, but we’re much better at interpreting in 3D. This has application to inspections and monitoring. Applications of quality 3D measurement also go beyond mapping. A surveillance drone, for example, might be used to measure the height of a suspect or the size of a vehicle.In exploring whether stereo compiling from an inexpensive UAS system is better, faster and cheaper than other approaches, mapping professionals will be able to see and understand what drones can do for them. McKim & Creed has done some incredible work with DJI hardware, but making a decision about which solution is the right one for you needs to be a careful and thorough process.“There are great potential payoffs, but it is good to be wary,” Thomas concluded. “Choose hardware and software that’s going to be suited to your tasks. If that includes a drone, great! However, I caution everyone to only get hardware tested by an unbiased party they trust or invest the time to test it themselves before they purchase.” Learn more about stereographic compilation as well as a variety of other fascinating ways drones are changing expectations on projects of all types and sizes at the upcoming DJI AirWorks event in Dallas, Texas on October 30th – November 1st

2019 Predictions for the Commercial Drone Industry with Michael Singer

A New Resource for Civil Engineers and Drone Entrepreneurs