Just as in Europe, commercial drone regulations across Asia differ from country to country, and there is no standardized regulation in Asia-Pacific areas. When or how a single set of rules will come together is uncertain, but when that happens, it will undoubtedly be the result of efforts like the ones NEDO (New Energy and Industrial Technology Development Organization) is pursuing in Japan. Given that Japan’s prime minister Shinzo Abe has said that he wants to “make robots a major pillar of our economic growth strategy”, defining how drones can and will be utilized in a variety of situations to perform countless tasks is only going to become more important.

NEDO’s work to help outline how technology like drones can be utilized for logistics, inspections and as part of large-scale disaster recovery efforts directly speaks to this development. Additionally, their efforts to connect unmanned traffic management (UTM) system integrated functions for operators across Japan will ensure drones can effectively function in the interconnected environments of the future. Enabling Rescue Teams to Utilize Robotics for Disasters Like FukushimaNEDO was established in 1980 as one of the largest public research and development management organizations in Japan. It’s two missions are to address energy and global environmental problems while also enhancing industrial technology. Given the potential impact drones can have for both, it’s easy to see why NEDO has become so focused on the technology. 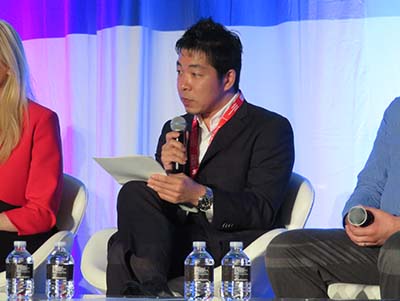 Akimasa Kameda on stage during the Commercial UAV Expo

As a director of Robot and AI technology Department at NEDO, Akimasa Kameda is in charge of managing multiple projects that explore how drone technology will be able to impact these missions. The Great East Japan earthquake/Fukushima disaster that occurred in 2011 provided the entire country with an example of a situation where drones could make a major impact, which the Fukushima test field is set to fully explore. NEDO and the project members are using the test field for their R&D to make these discoveries and showcase exactly how the technology will make a difference in emergency circumstances.“We believe that it is critical for the Japanese government to let other countries know the current situation in the areas that were heavily damaged from the earthquake and tsunami,” Mr. Kameda told Commercial UAV News. “We also realized that it is important for rescue teams to utilize robotics to achieve their missions regarding disaster response from the experience. In order to build new industry bases in the areas, ‘FUKUSHIMA innovation coast plans’ were made. Developing ‘Fukushima Robot Test Field’ is one of the plans. As NEDO, we contribute to support the plans and create new industries with technologies.”Creating new industries is something that their DRESS (Drones and Robots for Ecologically Sustainable Societies) project is specifically designed to do. DRESS aims to encourage the development of drones and robots that can be used in a variety of sectors and fields, while also running test flights and establishing systems in preparation for utilization of them in the society.NEDO cooperates with the Japanese government and supports private companies, universities and other research institutes to solve their problems. These cooperative and collaborative efforts have enabled them to move forward with the development of a UTM system for Japan, which is something that will not only support these new industries with technologies but also enable them to function in the interconnected environments of the future. Connecting UTM Integrated Function in Japan and BeyondJapan as a whole has been facing social challenges such as decreasing labor forces due to an aging population as well as the social disparity between urban and rural areas, and drones represent a technological solution to many of these issues. NEDO is defining how drones can be utilized to save energy, automate deliveries in rural areas and reduce the use of resources to make a positive impact on the environment, but doing so isn’t going to be an isolated development.Mr. Kameda shared his thoughts and perspectives around regulation, policy and UTM during the Commercial UAV Expo, where he highlighted recent developments from the DRESS project but also detailed how NEDO is thinking to conduct UTM integrated function connecting tests not only with Japanese unmanned aircrafts but also other countries’. By conducting BVLOS flights and flight tests in congested areas such as residential areas, NEDO will help shape and define the connected UTM environment that will enable the positive benefits of the technology related to reductions in energy, better connections for rural communities and much more.“For connecting UTM integrated function, we are planning to conduct verification tests with not only Japanese companies but also companies/organizations from overseas,” Mr. Kameda continued. “To make this into reality, we would like foreign companies/organizations to cooperate with us and conduct UTM integrated function connecting tests with their own aircrafts at the Fukushima Robot Test Field.”The test is open to anyone who is interested in joining and working with Japanese companies. To learn more about being part of NEDO’s effort, click here.

The Impact of Drones in South Korea for the Enterprise

The Impact of Drones in South Korea for the Enterprise

CIRC Expands Its Drone Capabilities in Multiple Directions, Stepping Up Its Competition Against Drones Manufactured in China on a Global Scale