Is the Drone Industry Ready for Remote ID?

The need for a universal system that enables the remote identification of drones (Remote ID) is something that the FAA and many other industry stakeholders have been talking about for a long while now, and these conversations are making an impact. While the delay on Remote ID rulemaking has been disappointing to many, that response is an indication that the industry as a whole recognizes the importance of this topic. However, there are other more direct signs that the drone industry is ready for Remote ID in a very real manner.

After releasing a white paper titled “Remote ID & Commercial Drones: Enabling Identification and Transparency in the National Airspace,” Kittyhawk asked people to take a short survey to hear their thoughts on Remote ID. The results of that survey, which were just released, are as instructive as they are illuminating not only about where things are with Remote ID but also in terms of where the industry wants to go with it.“The top-level numbers from the survey were very encouraging,” said Andrew Elefant, Director of Policy at Kittyhawk. “Seeing so many people agreed that a common standard for drone identification is necessary and that the lack of a common identification system is holding the drone industry back speaks to the urgency many people have recognized when it comes to enabling a true Remote ID solution.”This recognition is important because Remote ID is ultimately a system that exists to answer the simple question of, “who’s operating that drone?” Not knowing or being able to ascertain the answer to that question has caused many to fear or move away from the technology. That a good deal of the respondents said that they were comfortable sharing the serial number of their drone is an indication that they recognize this question needs to be answered.However, that the survey respondents said they were comfortable sharing only that number with no additional information also shows the limitations of what sort of information people are willing to share, which is tied into privacy and security concerns that go beyond drone technology. Thankfully, Remote ID can address these concerns in a powerful way to open up further commercial opportunities for users of all types.“What was evident with these results is that there’s a real recognition that Remote ID will level the playing field by providing an accountability mechanism, and that’s really important,” Elefant told Commercial UAV News. “It indicates that there’s a better understanding of not just how Remote ID is going to work, but of what it’s going to allow people to do.”That understanding is essential because talk about details like communication protocols and how data is or isn’t being transmitted can get in the way of recognizing these opportunities. An upcoming live webinar featuring Elefant along with Brendan Schulman from DJI and Reinaldo Negron from Wing will see these industry leaders discuss their thoughts and perspectives around such details. The approach to Remote ID that each of them will highlight will likely vary, but it’s important to realize that, first and foremost, each of these leaders and their respective companies understands and believe in Remote ID, even if they have different opinions about the limitations and benefits of each flavor of Remote ID.All of these distinctions stem from a recognition of the commercial opportunities that Remote ID will open up. That recognition lines up with what the survey demonstrated around people wanting to see a Remote ID solution, which further indicates that the broader drone industry as a whole is ready for it. What exactly this Remote ID solution looks like, and how it will come together are just a couple of the talking points that will be explored during this upcoming webinar and beyond. 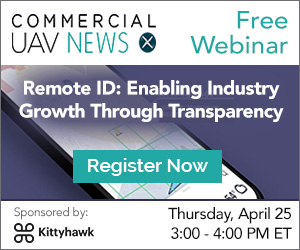