The Unmanned Aircraft System (UAS) Integration Pilot Program (IPP) is designed to help the Federal Aviation Administration (FAA) create new regulations that will enable the safe and secure integration of drones into the national airspace system. Dan Elwell, Acting Administrator of the FAA, has previously talked about how the FAA wants to work with drone innovators and operators, and the IPP program demonstrates what doing so means in a practical sense.

10 state, local and tribal governments have been selected as participants in the program, and their proposal descriptions range from focuses on border protection and package delivery of food to deploying UAS to support BVLOS operations in rural communities to pipeline inspection and surveying in remote areas and harsh climatic conditions. These proposals are set to help define how drone technology can and should be integrated by users of all types and sizes across the United States.We’ve previously detailed the commitment to the technology that made certain proposals more viable than others, but the specifics of where and how UAV technology is being utilized in this program will open up a broad range of applications. That kind of range is just part of what made the proposal from the Lee County Mosquito Control District in Ft. Myers, FL so intriguing. 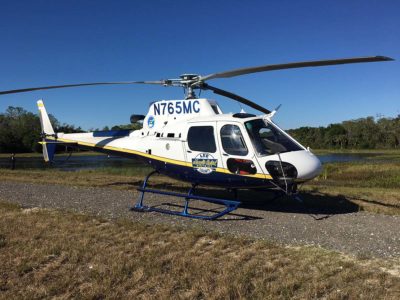 A look at one of the inspection/larviciding helicopters used by the Lee County Mosquito Control District.

If you don’t think drones and mosquitos are an especially sensible fit, that’s because you’re not familiar with the way the Lee County District had been monitoring aquatic vegetation. Prior to their use of drone technology, officials there would use a helicopter to fly over the water body and document with video or photos. For examining water bodies, the drone made perfect sense, as it allowed them to capture the same data needed to make treatment decisions at a much cheaper cost.It’s the reason the Lee County District first began using small drones to view aquatic weed growth in area water bodies in the spring of 2017. Today, their pilots have the FAA license to fly drones, as well as quite a bit of experience operating them to gather especially critical data and make a real difference in the region.“Due to the abundance of salt marsh habitat in our county, the district heavily relies on aerial methods of control, both with larviciding and adulticiding,” said Eric Jackson, Public Information Officer for the Lee County Mosquito Control District. “By keeping the mosquito populations down, the district minimizes the threat of vector-borne disease as well as ensures that Lee County continues to be a comfortable place for residents and visitors to enjoy outdoor activities.”Drones allowed officials to easily view an entire water body (lake, pond, or canal) from the air, and see the effectiveness of the treatments over time. This application might seem to be an especially narrow one, but the possibilities related to how such specific data can be gathered in this kind of unique environment will be relevant for sensible regulation in a variety of contexts and industries. It’s something that speaks to the core mission of the IPP itself since it is ultimately intended to stretch the boundaries of the current regulations. Doing so is just part of the reason officials in Lee County wanted to be part of this endeavor though.“Being able to have a hand in crafting drone regulations moving forward plays a large part in our involvement with this project,” Jackson told Commercial UAV News. “We rely heavily on aerial applications to control the mosquito population in our county. The safety of our pilots is first and foremost on our minds. To be able to ensure that drone use is regulated thoughtfully and sensibly with the safety of our pilots in mind is a priority. As drone technology advances, it will be beneficial to see how we can use it in the various aspects of our operation.” 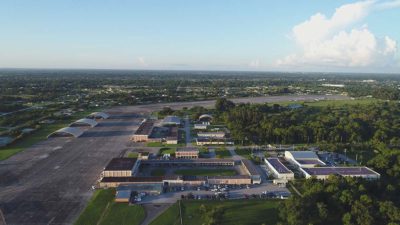 The Lee County Mosquito Control District’s IPP proposal was focused on low-altitude aerial applications to control/surveille the mosquito population using a 1500-lb. UAS, and is set to create an innovative path in terms of where and how drones can be utilized. It will ultimately help make sense of what it means to effectively enable night operations, BVLOS and operations over people, all of which are issues that have so far only been enabled on a one-off basis. Doing so will open up scalable drone applications that could transform entire industries and ways of life.It’s exciting to consider how the Lee County Mosquito Control District along with all of the other IPP selectees will shape the future of commercial drone regulation, but doing so is going to be a process. It’s not something that’s going to happen overnight, and it’s why Earl Lawrence, Director of the UAS Integration Office at the FAA, mentioned that all of the IPP selectees are required to set up a community exchange to let their communities know what’s going on with the program and get involved with this process as it takes shape. You can stay up to date with those developments on the FAA’s website.The Lee County Mosquito Control District is committed to examining any technology that can make their operation more efficient and precise. That commitment is going to change the way the mosquito populations are monitored in the short term for them but will have a much bigger impact on the drone industry as a whole in the long term.