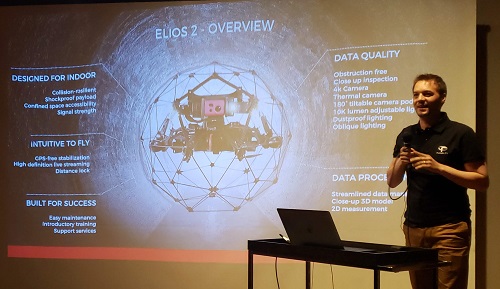 While XPONENTIAL is always a great place to connect with drone industry experts and learn about everything from the safe integration of manned and unmanned aircraft to BVLOS flight to drone delivery, it’s also a place where companies debut innovative new products and solutions. At XPONENTIAL 2019, one of the most exciting new products ended up debuting before the event officially kicked off with the launch of the Elios 2 from Flyability.Flyability was founded on the concept of sending robots into dangerous situations rather than people, and products like the Elios 1 were created to create new standards around inspecting, monitoring and exploring confined places. We’ve documented how underground surveys and inspections are being conducted with drones and the Elios is what made those tasks possible. The product has made a considerable impact around inspections that go beyond the bottom line.Ultimately, the value proposition around their product is about improving the safety of data acquisition, reducing downtime and lowering costs. The Elios 1 proved it could do all of these things by being designed for the inspection and exploration of the most inaccessible places. It’s value that Flyability has helped to create in environments that range from coal plants to nuclear sites to undergrounds mines. However, thanks to numerous improvements, the Elios 2 takes these value propositions to a whole new level.

A look at the difference it makes for the payload of the Elios 2 from @fly_ability being outside the cage, rather than in it pic.twitter.com/Hnqnh4CHOB

Two of the biggest challenges when it comes to adopting tools like drones and the Elios specifically relate to ease of use and the quality of data. Inspectors aren’t pilots, and if the data they’re getting off a drone isn’t something that can provide them with a specific measurable or action item, then the data isn’t creating value. All of these needs and requirements went into the design of the Elios 2.“In developing Elios 2 we asked our users to challenge us. With their critical feedback, we went back to the drawing board to design, from the ground up, the ultimate indoor inspection drone they had dreamt about,” said Dr. Adrien Briod, Co-founder & CTO of Flyability. "The result is an intuitive-to-fly drone fitted with an unobstructed 4K camera that can hover in place to spot sub-millimeter cracks. It performs reliably in GPS denied environment, in dark, dusty and troubled airflows, beyond line of sight, and particularly in places that no other drone can access."Arguably the most important aspect of the Elios 2 is the location of the payload, which has moved from the middle of the cage to reside within the cage itself. The difference that makes for inspections is striking, as was shown in a comparison of an inspection of the same area with the Elios 1 and Elios 2. Not having the cage in the frame makes all the difference in the world.The Elios 2 also features including a thermal camera, shockproof payload, full HD live video feedback, distance lock, 2D measurements, 3D modeling, a modular design for easy maintenance, and a completely redesigned software suite that streamlines data management from planning to reporting. The 10’000 lumens of light that the product can provide are important to note as well since it might be the most powerful and intelligent lighting system ever put onto a drone.

Feedback and insight from Chris Fleming of @TheCyberhawk about how they've been able to use the Elios 2 from @fly_ability pic.twitter.com/S1S6vdCSky

Flyability didn’t simply use the event to highlight these new features and potential applications of the Elios 2 though. They also brought out experts from Exelon, Dow and Cyberhawk to discuss where and how the product will make a difference, with Chris Fleming himself taking the stage to talk through the first-hand feedback his team has provided after getting their hands on the Elios 2. That feedback included comments about the much-improved camera quality, better lighting with more control and less equipment for the team to carry. Their comment about the camera being on the outside providing multiple, noticeable benefits underscore how the team has already and will be using the product.Flyability is currently accepting orders for the new Elios 2, and interested customers can contact the company directly to learn more about the new platform. To learn more about the Elios 2 visit flyability.com/elios-2