What Does the Commercial Drone Market in Europe Look Like in 2018? 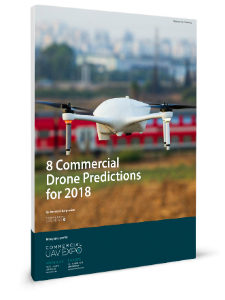 Figuring out the future of the commercial drone industry is an impossible task, but we can still identify a number of trends and opportunities that are shaping up for it in the near future in a major way. To get a better understanding around how such things will impact the industry as a whole in 2018, we connected with various experts to put together eight predictions around what commercial UAV operators need to consider in terms of drone data, drone security, anti-drone technology and plenty more.However, with Commercial UAV Europe coming up in April, we wanted to find out what 2018 has in store specifically for operators and organizations across Europe. To do so, we talked with Ash Sharma, Research Director at Interact Analysis, based out of London in the UK.Interact Analysis recently published a report that contains a robust model of UAV penetration into a variety of industry applications along with country-specific profiles that explore how drones are being used across Europe. Their research also investigates the status of a number of breakthroughs that could change how drone technology is utilized all over the world, which is why we used this opportunity with Ash to detail how many of these developments will or won’t take shape across Europe in 2018 and beyond. Jeremiah Karpowicz: Will the regulatory environment in Europe in 2018 continue to force commercial operators across the continent to think in terms of how the technology can be used in individual countries? How does or doesn’t that correlate with operators who approach their use of a drone with more of a focus on a specific application? Ash Sharma: We won’t see uniform and EU-wide policy implemented in 2018. Despite that, operators and suppliers are generally focused on market segments in terms of their solutions, yet are organised geographically in their sales channel structure.Future changes in policy and EU framework are unlikely to change this set up, as suppliers will likely remain focused on opportunities in a small number of countries (most likely their domestic market) until the industry is much more mature. What evidence of commercial drones consumerizing and commoditizing will we see in Europe in 2018?It depends.Some applications (e.g. public safety) have seen a bit of a shift towards ‘prosumer’ platforms, whilst others (e.g. oil & gas) appear to be moving the other way. Of course, like any industry we will likely see cost reduction as drone usage scales, but I don’t expect we’ll see ‘commoditization’ as early as 2018.Having said that, we have seen suppliers, such as Parrot release new low-cost products targeted at commercial applications. However, we view this as an entry-level product that customers may trial before moving to an industrial grade solution. Your report lays out why we can expect media & entertainment to continue to be the biggest market, but how do you see the markets for using drones in industries including construction, building inspection and public safety changing or evolving in 2018? Are there specific countries in Europe where you think that development will be most pronounced? Yes, absolutely media & entertainment will remain the biggest market for the next few years, but it will be far outpaced in growth by other sectors. We see particularly fast growth for construction, building inspection, public safety and oil & gas.In 2018, we predict construction will be worth $147m for drone hardware and services. Public safety will be the next largest at $60m.Demand is somewhat dominated (and will remain so in 2018) by three EU countries: France, Germany and the UK. This is not surprising given that they are also the largest three economies in the EU. The UK has been an early adopter of drones in public safety, and we predict wider rollout in 2018. France has been more diverse in its usage of drones, but particularly for inspection and construction. Germany is a similar picture as France, but with its high penetration of renewable energy, inspection of solar and wind farms is expected to present an attractive segment also.

Do you think the 2019 estimate that EASA had laid out for the rollout of a centralized system for registering drones and drone operators will cause some people to hold off on their pursuit/adoption of drone technology in 2018? It’s likely that it will put off enterprise purchases or large-scale adoption until it is implemented, and our forecasts show much more rapid uptake from 2019 and beyond in the EU.However, it should be noted that EASA is already behind schedule in its policy recommendations. The initial consultation period was extended to allow for more comments to be made, which means it is possible it may not make its recommendations to the EU by the end of this year, which was originally planned. What role will the adoption of LIDAR play in the development of the commercial drone market in Europe in 2018? Two-fold. One, it will likely be trialled more widely for sense and avoid applications – this will provide critical data/experience for enabling increasing automation. Second, drone deployed LiDAR scanners will start to be used more widely, disrupting manned applications and potentially replacing photogrammetry for volumetric analyses. Your report mentions that you don’t think developments like BVLOS and sense & avoid technology will start to have a material impact on the commercial UAV market until 2019. Are there developments or stepping-stones around making that happen that we can look forward to seeing in 2018? Current country-level regulation makes BVLOS operations impossible in most countries. We have seen however some BVLOS inspection projects happen in France and also Switzerland, which have been somewhat of a pioneer in the EU. We do expect more trials and one-off projects take place in 2018, but BVLOS operation will remain very limited.