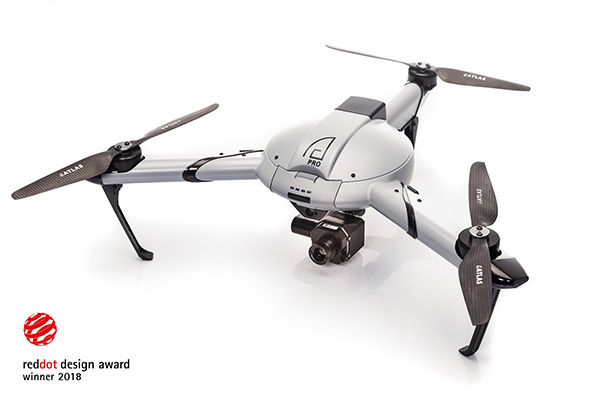 The Atlas Pro professional drone has been named a 2018 Red Dot Award winner, and that’s a big deal for multiple reasons. Designers and manufacturers from 59 countries submitted more than 6,300 products for the Red Dot Award: Product Design 2018, and this victory represents something major for Atlas Dynamics as well as for the drone industry as a whole. It’s something that could help change how people across the world think about and utilize UAV technology.Dating back to 1955, the Red Dot Award: Product Design determines the best products created each year by using a submission process that requires participants to prove their key innovations. In the case of the Atlas Pro, that meant demonstrating the product’s proprietary software, gimbal, and aeronautical and mechanical design. All of those features enable the capabilities that the judges undoubtedly noticed, and were top of mind for the development team.“The Atlas Pro was developed fully in-house utilizing our proprietary patented technology,” said Ivan Tolchinsky, Founder and CEO, Atlas Dynamics. “The tri-copter design, with pivoting rear servo, is designed specifically with ergonomics and durability in mind. This includes unique wing forms that are optimized to generate lift, similar to those on conventional aircraft. The rounded hull and full carbon fiber construction make the Atlas Pro incredibly durable and lightweight, allowing it to withstand up to 9G pressure and high wind speeds to reach altitudes of up to 6000 meters.”That tri-copter design is especially notable in the drone space, and likely influenced how the Atlas Pro was considered when compared to other candidates. Having just three engines significantly reduces power consumption, allowing up to 50 minutes of flight time and 50km range, which is significantly more than standard quadcopters. The drone is also highly compact and requires minimal storage space.By making drones that are that much easier to utilize and operate, Atlas is helping to change the perception and expectations around this technology. It’s a change that means something to people who have not had a chance to experiment with a drone but also represents a distinction in terms of how the general public thinks about and wants to utilize this technology.“We created the Atlas Pro with the intention for drones to become accessible, versatile and easy-to-use tools for a range of customers, many of which have not previously considered a drone-based solution,” Tolchinsky told Commercial UAV News. “Our victory is part of a general change in public opinion as more people come to the realization that drones are not just toys or military-grade weapons. With the right innovation, they can be essential tools to greatly enhance societies and industries.”That innovation speaks to the judging criteria of the Red Dot Award, which is more than just a design competition. The event seeks to highlight the importance of design for business and society. Experts from across the globe present the latest developments in design. These are all considerations that speak to the higher-level goals that Tolchinsky has in mind for the company in the present and the future.“We are committed to simplifying complex aerospace technology so that drones can become accessible tools for a wide range of markets, for both large and small customers,” Tolchinsky said. “The new systems which integrate with the Atlas Pro, such as mesh networks and computer vision, can take this field to the next level, creating new use cases which were not previously available. Thanks to mass manufacturing techniques, we can provide drones at competitive prices, making it a cost-effective solution for many users.”The company is working to fulfill a vision of UAV system connectivity and has explored what changing regulation will mean for operators across the world, and this news reinforces their position in the space. Many have described the Red Dot Award as the gold standard in product design, and this award helps solidify the Atlas Pro as one of the leading commercial drones currently on the market.The winners will be celebrated at the Red Dot Gala and awards ceremony in Essen, Germany, on 9 July 2018.

A DroneTalk with Martin Marinak About the Importance of Measurements

A DroneTalk with Martin Marinak About the Importance of Measurements