With nearly 400,000 acres under management, Kamehameha Schools is Hawaii’s largest private landowner. Their property is home to educational facilities, as well as ranching and cropping systems and significant archaeological sites. 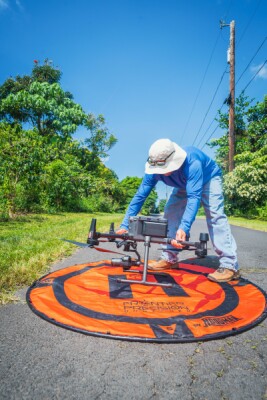 To gain a better understanding of their vast land and valuable assets, Kamehameha Schools wanted to use drone-based imaging technologies. For training, they turned to Frontier Precision.

According to Sean Muldoon, UAV Operator - Sales & Services Specialist at Frontier Precision, members of the school system’s Archaeological and GIS team contacted Frontier Precision a little more than two years ago for information on drone-based imaging. With more than 34 years of experience in fields such as GIS, uncrewed vehicle systems, surveying, mapping, and natural resource management, Frontier Precision was an ideal partner for the Kamehameha Schools’ project.

“Our UAS team spent about a year educating them about drone technology and what systems they could use to assess and document what they had in the field,” he said. “Because they encompass land management, cropping, ranching systems, and archaeological assets, we taught them about what's being done from a survey standpoint and what's being done in agriculture.”

The process led to the creation of a concrete and scalable plan for acquiring data with drones and for managing that data. “We explained to them how they could capture their data and what they could do in their geo databases to understand and organize all that data,” explained Muldoon. “Our role was to educate and present tools, technology capabilities, and use cases in order to put together a plan for where they wanted to start with drone technology and where they could take it.”

Working with the Kamehameha Schools’ GIS team, Muldoon and his Frontier Precision colleagues evaluated a number of factors to determine the best approach to drone-based data collection and management. One of those factors was the variety of terrain involved in the project. “In Hawaii, you have mountains, ocean cliffsides, and very heavy, dense vegetated areas that make it difficult from a traditional surveying standpoint, so we had to determine what types of vehicles would work best,” Muldoon said.

To start the project, the Frontier Precision team recommended a quadcopter. “Quadcopters are much more durable than other aircraft, and they can be flown in various weather conditions like high winds and precipitation,” said Muldoon. “The initial plan is to use a quadcopter for general data collection. In the future when they isolate areas that need specific attention, we may recommend they go with a fixed wing aircraft.”

The agriculture work done on the Kamehameha Schools’ land heavily influenced decisions around what imaging systems to use. “They had old survey plans and maps that showed what they thought was being grown but a lot of it was outdated,” Muldoon reported. “Lessees had changed. Farming systems had changed. They were doing multiverse cropping. They were doing coffee, avocado, and different seasonal crops, and they kind of lost track of what was going on out there.” 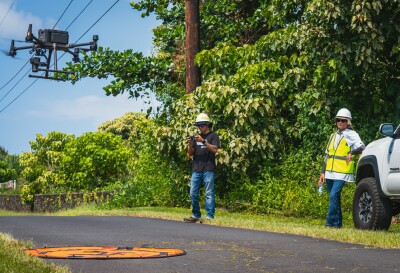 For more accurate data capture of agricultural areas and other assets, Frontier Precision recommend photogrammetry and RGB cameras. “The RGB camera will give them real-time, high-resolution imagery to be able to assess and document what's in the field,” Muldoon said.

This September, Kamehameha Schools purchased the equipment, and Muldoon flew to Hawaii to provide initial training on a photogrammetric drone imaging system that will allow them to begin doing a general assessment and inventory of high priority assets. In the future, Kamehameha Schools may implement lidar and multispectral technology to see below the tree canopy and collect plant healthy data on agriculture commodities.

Whatever decision they make on future equipment and projects, Frontier Precision will be ready to provide guidance and training.

“A lot of people just sell drones, but they don't know how to integrate the vehicles with software and imaging systems and other technologies,” Muldoon asserted. “What really makes Frontier Precision different is our ability to integrate these systems and provide training to our clients. Whether we’re training online, in the classroom, or in the field, we strive to make sure our customers have the capacity to use the tools to achieve their goals. We want our customers to feel good about their purchase, put it to use, and be effective.”