Racurs Automates the Processing of Drone-based Imagery into Photogrammetric Products

Today, drones equipped with lightweight aerial cameras are used for capturing aerial imagery and are creating real differences on projects of all types. These images serve as the basis for different photogrammetric products, ranging from 2D maps to 3D models, and they're opening up brand new opportunities thanks to hardware and software developments that have enabled the creation of new deliverables, resulting in higher accuracies and a faster turnaround.

When professional drones were introduced some years ago, they were immediately adopted by the photogrammetric community for capturing aerial images. Unmanned drones with lightweight digital cameras provided a cheaper alternative to aerial surveys with manned aircraft, especially for small-scale mapping projects. Photogrammetrists immediately started experimenting and developing cost-effective solutions for specific use cases, but the difference the technology can make is something that's being taken to a whole new level thanks to software that was on display at the “From Imagery to Digital Reality: Earth Remote Sensing and Photogrammetry” event. 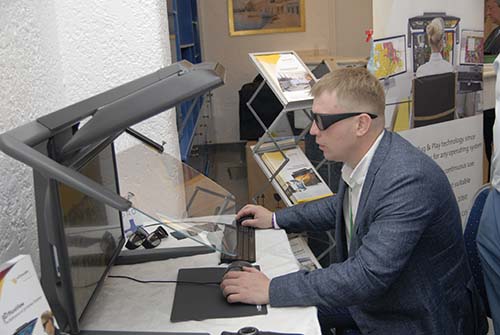 Photogrammetry and UASRacurs is a software and services provider from Moscow, Russia that has been active in photogrammetry for 25 years. They created a digital photogrammetric system named PHOTOMOD that was first introduced in 1993 and now used in more than 80 countries. The system is used for obtaining metrically precise spatial data from all sorts of imaging systems and generating value-added cartographic data products.The popularity of drones led to the creation a separate UAV-oriented software product, called PHOTOMOD UAS that automates the processing of drone-based imagery into photogrammetric products such as DSM (digital surface models), DEM (digital elevation models), 2D and 3D vectors and orthoimages. The system allows for processing performance improvement due to a distributed processing approach, and uses available computational capabilities most effectively. Operations such as block layout creation, building cut-lines, tie point search/measurement, DEM building and filtering are available in fully automatic mode. From Imagery to Digital Reality“From Imagery to Digital Reality: Earth Remote Sensing and Photogrammetry”, is the official name of Racurs’ yearly-held international scientific and technical conference where participants discuss new trends and technologies in photogrammetry, use cases of satellite data and image processing, aerial survey using UAS and more. The event took place last September in Crete, Greece, consisting of a three-day conference program that offered various presentations that showed how UAV technology benefits the work of photogrammetrists, entailing data capture, processing and the delivery of photogrammetric end products.Numerous showcases of aerial survey and UAS were presented at the event, and one specific use case of Racurs’ PHOTOMOD UAS system is performing spatial aerial triangulation, or simply aerotriangulation. This term refers to the process that guarantees a high geometrical accuracy of photogrammetric data products generated with aerial and satellite imagery and involves the creation of orientation parameters or ground control points (GCP) that are measured before the drone flight and used to perform block adjustment when processing the imagery later on.The Greek photogrammetric engineer Yannis Yannikis proved that careful and intelligent configuration of PHOTOMOD UAS makes it possible to achieve sub-pixel accuracy for aerial triangulation. In this particular case, a Phantom 4 Pro drone using a 1-inch sensor with a mechanical shutter was used to capture and process imagery of 30 different Greek villages. Each project started with the marking of ground control points that were measured using a GNSS receiver. After making a flight plan and the actual flight for image data capture, the geotagged images were downloaded and processed using PHOTOMOD UAS. The good results were obtained using good targets that could be measured accurately, a pre-calibrated camera and doing rigorous and careful adjustment using the PHOTOMOD UAS software. Using “unprofessional” Drones for mapping projectsAs stated above, a high accuracy can be achieved using a common drone and a professional photogrammetric software solution. However, many drone manufacturers offer cheap, non-professional drones that provide an attractive alternative to professional and more expansive mapping systems. Researcher Alexey Smirnov from Racurs discussed his experiences with such popular mass market UAS for mapping projects. One of his conclusions was that many “hobbyist” mappers are not aware of the potential pitfalls of using a consumer-type UAS for a mapping project, which can lead to unpredictable (and unusable) results.When capturing data using a camera, the most important factor is the sensor, which determines the data quality. However, drone manufacturers compete with each other on less important features as flight times. Also, image quality and accuracy are two distinct matters, as there is no relation between a sensor and a GNSS system. Accuracy and image quality can’t be predicted beforehand when using a UAS from drone resellers or manufacturers, which is why no guarantees can be given.To prove his point, Smirnov showed some map images taken with consumer-type UAS that didn’t meet professional mapping standards. A cheaper system equipped with a fish-eye camera resulted in imagery with a strong visual distortion, making it unfit for performing measurements. Other examples showed more accurate results, but with notable color differences between images. Oftentimes, it was not clear why a cheap system did not produce good results. The best alternative is to use a professional mapping system that produces reliable results. 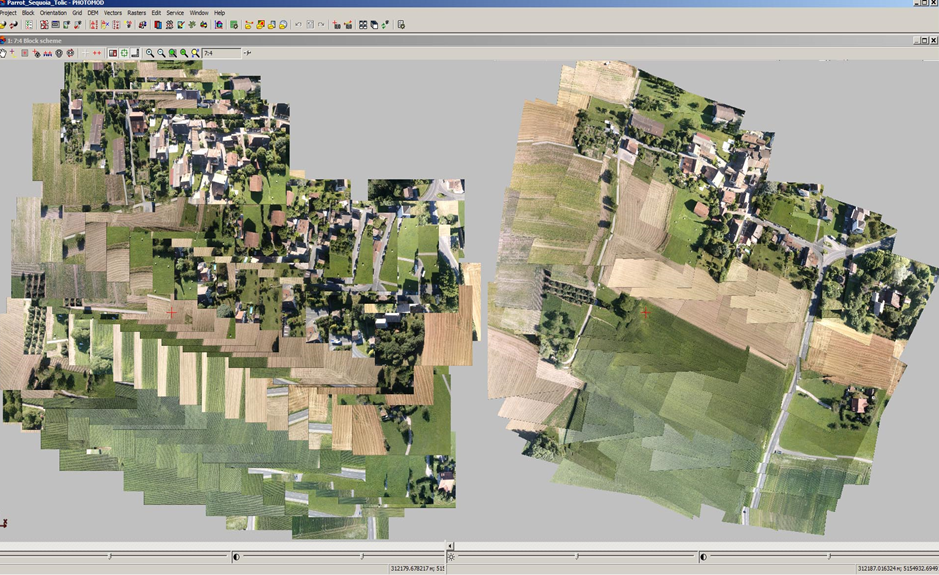 Aerial Imagery for 3D modeling and VR/ARFor a long time, photogrammetry has been occupied with height data, resulting in a variety of 3D models derived from aerial and satellite imagery. Digital Photogrammetric Workstations (DPWs) are used for stereoscopic imaging, where images are of the same scene or object are displayed using two separate monitors but from a slightly different angle or perspective, implying spatial depth. During the conference, Schneider Digital, a German provider of professional 3D hardware, demonstrated its 3D PluraView stereophotogrammetry monitor using the highest resolution currently available on the market. The monitor is supported by many professional applications in the geospatial industry.A more recent application that photogrammetry is involved with, is VR/AR. While there are not many use cases that combine both disciplines, it is expected that this will change in the future. One of the current problems with AR/VR is that there are many different applications for different verticals that lack any form of standardization. Many verticals are still trying to find applications where AR/VR is beneficial and profitable. However, photogrammetry and VR/AR make a great combination as VR/AR environments need accuracy to measure distances between objects in a projected 3D space. UAS and the CloudSpatial data used to be stored locally. These days, more and more data is processed in the cloud. The same can be said for software applications that run in the cloud but are accessed through a web browser or desktop client. Using cloud infrastructures brings along new subscription models, where users pay an hourly rate instead of fixed licensing costs. This can be beneficial for people with limited resources, such as students.While different software companies have created their own cloud (Esri, Autodesk), there exist alternatives that combine various software programs in one cloud environment. For software users, who might use multiple software programs for a single workflow, this can be a handy solution. GeoCloud is one such example, a SaaS platform based on Amazon Web Services. It targets geospatial professionals, software vendors as well as spatial data providers. The service was launched only recently but already offers many software programs for a wide range of categories. Lessons LearnedDrones have become a reliable and cost-effective alternative for capturing aerial imagery with manned aircrafts. In just a few years, they’ve become an important factor in the field of photogrammetry. As drone technology is being refined and new sensors are being developed over time, photogrammetrists are trying to find new ways to use drone technology in order to achieve more accurate data for mapping projects. While cheaper, mass-consumer drones may look like a tempting alternative to more expensive, high-end mapping systems, these cannot offer the same reliable end results obtained with professional systems. Years of field experience and familiarity with photogrammetric software for imagery processing enables professionals to achieve higher accuracies, resulting in more reliable cartographic data products. With new applications fields such as 3D GIS, 3D city models and AR/VR, the photogrammetric discipline finds new markets and users. Drones will continue to play a huge rule for acquiring data that will form the base of such data products like the ones Racurs and others are able to provide.

What Advantages Does Correlator3D from SimActive Offer Over Competing Mapping Software?

Eric van Rees is a freelance writer and editor. His specialty is GIS technology. He has more than nine years of proven expertise in editing, writing and interviewing as editor and editor-in-chief for the international geospatial publication GeoInformatics, as well as GIS Magazine and CAD Magazine, both published in Dutch. Currently, he writes about geospatial technology, programming and web development. See more from him on SPAR3D.com

What Advantages Does Correlator3D from SimActive Offer Over Competing Mapping Software?

Should you Choose LiDAR or Photogrammetry for Aerial Drone Surveys?