Commercial UAV News has often talked about the challenges big data analysis pose for the enterprise and the potential of AI/machine learning as a solution. We have also highlighted the potential of drone-in-a-box solutions to fly fully autonomous missions. While we have focused on these topics independently, we are starting to see companies like Percepto bring these two technologies together to create a full end-to-end solution for their customers that delivers important insights to the end user via machine learning and computer vision.

Percepto’s drone, Sparrow, is capable of flying in almost any type of weather condition or climate and its box can withstand extreme weather conditions. The company demonstrated this recently by showing a video of the Sparrow flying in a snowstorm. Being able to complete a mission in inclement weather where other drones may be grounded is a major differentiator and is an essential element for keeping up with scheduled autonomous missions.

This is not the only thing that differentiates Percepto’s solution, because they are capable of capturing data via autonomous drone flight, the data collection is consistent and reliable and at a level that would not usually be possible with a pilot. This data is then analyzed by Percepto’s AI, PerceptoCore, to deliver meaningful insights to their clients about the state of their asset.

We spoke with Dor Abuhasira, Co-Founder and CEO of Percepto, to talk about how he has leveraged computer vision and machine learning to create a fully autonomous end-to-end drone-in-a-box solution for companies all over the globe, the kind of value this solution can provide end-users, and more.

Danielle Gagne: Percepto has been in the industry since 2015, can you tell us a bit about the evolution of the company from where it started to where it is today? 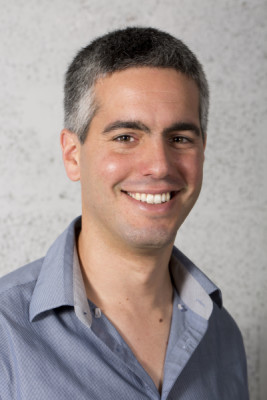 Dor Abuhasira: When we founded the company back in 2015, we assumed that the market was big enough that we would only need to build a technological layer that would solve a problem, and we would have a great business. So, at first, we decided to only build computer vision for real-time processing for drones. This enabled drones to be more autonomous by being more accurate in positioning themselves and more responsive to their environment in real time.

We did this for the first two years, but what we discovered was that the defense industry liked it but the commercial market—even though it was discussed a great deal at the time—was not ready to buy the technology yet. They were still lacking in the application of use cases. So, in 2016, we transformed the company to create a full autonomous drone end-to-end solution.

Today, this end-to-end solution enables us to take a large amount of data, which is collected autonomously via drone 24/7 in almost any lighting or weather condition. This solution then provides value based on AI and machine learning applications that knows what the site looks like so it can generate alerts when there is an anomaly and produce a report of changes that users need to focus on.

What distinguishes your solution from other solutions out there?

I think the distinguisher is that we have a drone-in-a-box solution on site.

If you think about the companies today trying to automate the process of data collection and analysis, I think most companies are focusing on how they analyze, visualize, and provide insights to the customer. But for these companies there is one limitation: the data. With data, if you put garbage in, you’ll get garbage out. We have automated that data collection part, which means it is capable of collecting a continuous, reliable, and consistent stream of very high-quality data.

This in turn enables our software system to analyze much more efficiently, easily, and accurately because it’s processing the same type of image every time.

When we refer to a drone-in-a-box solution, that can mean a lot of different things to many different people. The definition for this term hasn’t really been established in the space. Can you talk about what that means for Percepto?

The key aspect of a drone-in-a-box solution is that it doesn’t require a human on the ground to make it work. The drone has to be able to execute your mission, come back to the box, upload the data and charge, and then do that again all on its own.

In the world of drones, people often say they have an autonomous drone, and I think that is confusing because even if the flight can be autonomous, if you have to have someone place the drone and make sure everything is okay and then when the flight is done you have to take it with you, it is like having a pilot—the autonomous part is solving other problems there.

When you have a drone-in-a-box, it is saying that there is a completely automated robot that is working out of that box. The box is not just a way to carry a drone—it’s an automated robot collecting data without needing a human there. 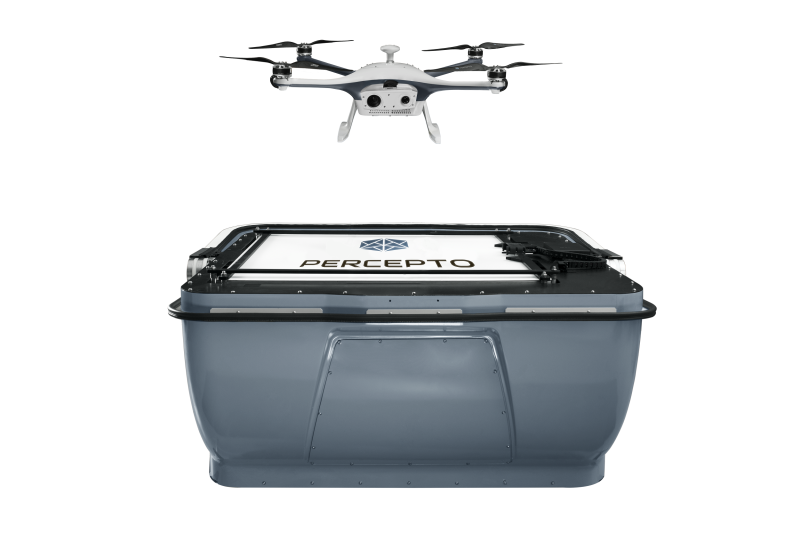 The video of Percepto’s Sparrow flying in a snowstorm is a pretty powerful image of the robustness of your platform. Can you talk more about the endurance capabilities of your system?

Without getting into specific details, our drone-in-a-box solution is an outdoor solution so it is designed for very harsh weather conditions. Currently, we have successful deployments in Canada as well as Mexico, which have very different climate and weather conditions.

There are a few instances where they wouldn’t be able to fly such as during a hurricane or other extreme storms. But the base station itself is designed to withstand that kind of weather, so once the storm is done, you can immediately send your drone out to get a damage report.

What types of data can your sensors collect for customers? Can you give a few examples of use cases?

Our basic payload is two cameras, a high-resolution video and thermographic camera, which not only has thermal imaging but a heat signature as well (you know the temperature of what you are looking at). I find for most applications, this is all you need, however, we have additional room for other payloads on the Sparrow drone, so there is some customization available for specific jobs such as detecting certain chemicals or gasses like ammonia or methane.

One of the exciting things about our product is that not only can you solve complex problems like getting aerial inspection data of a chimney stack or getting into places that are difficult to access, but you can also send it to do simpler data collection, such as examine roof tops or check to see if there is debris on powerlines. Because everything is automated, you can do this on a daily or even hourly basis.

In a previous interview with Dronelife, you noted that you were hopeful that the regulatory environment was moving in the right direction in the US, in what ways are you seeing this and do you think the Remote ID NPRM is going in the direction you anticipated?

My confidence comes from the processes that I see happening within the FAA. I have tried to work in the US for the past four years, there has been a noticeable shift, and there is a huge push forward to enable full BVLOS flight using a system like ours. I think you are going to see steps that will enable different drone flights in different geographies that are completely BVLOS in a much simpler legal process than it is today. Rather than take a month like it does today with endless approvals, I think we will see a full solution that will only take a week or two for approval.

Remote ID is a huge step that will enable us to solve the biggest problem with drones, which is how do we integrate drones into our airspace in a safe way. UTM and Remote ID are a crucial part in having an even more advanced solution. I think regulations will need to differentiate between different risk profiles, flying a drone for deliveries will have a different risk profile than flying over a nuclear facility, for example. For most of these situations, it has been treated as the same from a regulatory standpoint—I think that will change.

5G is set to revolutionize autonomous operations in the future. However, it may take a while for rural areas to get connected—how does Percepto work in the current 4G LTE environment?

I think that the 5G network has a lot of potential to push the industry forward not only in terms of bandwidth and reception, but also for UTM and remote ID for drones. It will be a huge deal for the industry, and it can be a technology that allows us to use drones in more geographies and more use cases. So, I am excited about the growth of the technology very much—I see a huge opportunity there and no real drawbacks.

But I don’t see 4G as any kind of setback. We work mostly within a 4G LTE environment today. It is still a strong network on which to stream high-quality video. We also work well in unnetworked environments.

If I were considering your solution for my business, what would you most like me to understand about the company?

One of the things that is most important to me is that people realize that a drone-in-a-box solution is not something futuristic. Our drones are already flying across the world, basically 24/7. And even in the U.S. with the regulations there, the waiver process that is there now has enabled a solution like this, and there is already a significant amount of systems already operating in the U.S.

People should not wait for big news about regulation, but rather engage with their needs and understand how they can use autonomous drones today as a potential solution. They’ll be surprised that they can do more than they think already.