Designed, manufactured, and serviced entirely in the USA, the E2 is a quadcopter drone for automated industrial and structural inspections. Featuring a flight time of 30 minutes with a full payload, and a maximum wind endurance of 15 m/s, the drone carries a quick-change payload upfront on the nose rather than on the belly of the aircraft enabling operators to get full field-of-view, even looking vertical. The payload system works with RGB cameras, laser positioning, and guidance systems, but can be customized for other payloads, such as lidar, thermal imagery, trace gas sensors, radiometers, and multispectral cameras. 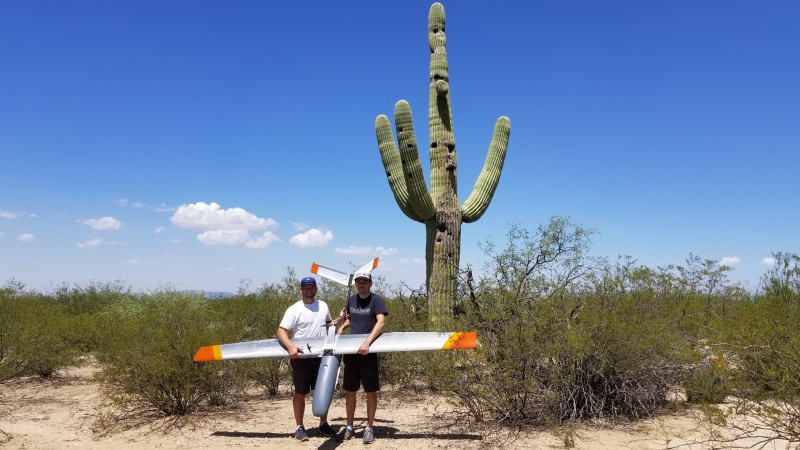 “All our systems have been designed around making it easy for people to indicate how they want their data collected, what they want to collect it with, and then be able to go and execute that on a regular basis,” Jack Elston, CEO and co-founder of BST, told Commercial UAV News. “That’s everything from making a simplified user interface to adding a bunch of features you don't really see on other flight management systems, such as custom flight plans you can easily create with just a few parameters to go and gather things, like a volumetric sample for figuring out what trace gases are in the area.”

“Although there are advantages, there are several distinct disadvantages to making use of open-source code,” added Elston. “The problem [with open-source] is you're trusting something that's designed by an entire community, and the qualifications of all the people contributing are not necessarily sufficient for writing mission-critical code.”

According to Elston, when the company first started developing the autopilot system, an open-source alternative was not available. However, this provides the team with an advantage, as each line of the code has been carefully crafted with reliability in mind from experts with years of experience in the field. BST can ensure that the only code put into these aircraft is exactly what’s needed and won't cause any issues down the road.

“That being said, we provide access to most of the functionality of the flight management system and provide an easy to use software development kit,” Elston emphasized. “There's plenty of different ways for you to get in there and change settings, command the aircraft, do whatever you need to do to be able to perform the missions that you want to perform. We guarantee all the underlying algorithms determining the state of the aircraft and flying the controls are all done with the kind of rigor that we expect. We're focused on delivering a good user experience overall.”

Founded in 2011, BST builds purpose-built scientific aerial platforms for a variety of specialized atmospheric research missions in extreme conditions including monitoring and assessing wildland fires, volcanoes, tornadoes, and hurricanes. Last year, we talked about how BST and NOAA used a swarm of drones to research hurricanes. Also, in conjunction with NASA and a research group at the University of Colorado, BST has designed a soil moisture measurement system to provide information about the amount of water content in the top eight inches of soil. In 2018, BST was awarded a NASA contract to develop a drone for atmospheric observations of Venus. These are some examples of the advanced technology and cutting-edge applications BST works on. 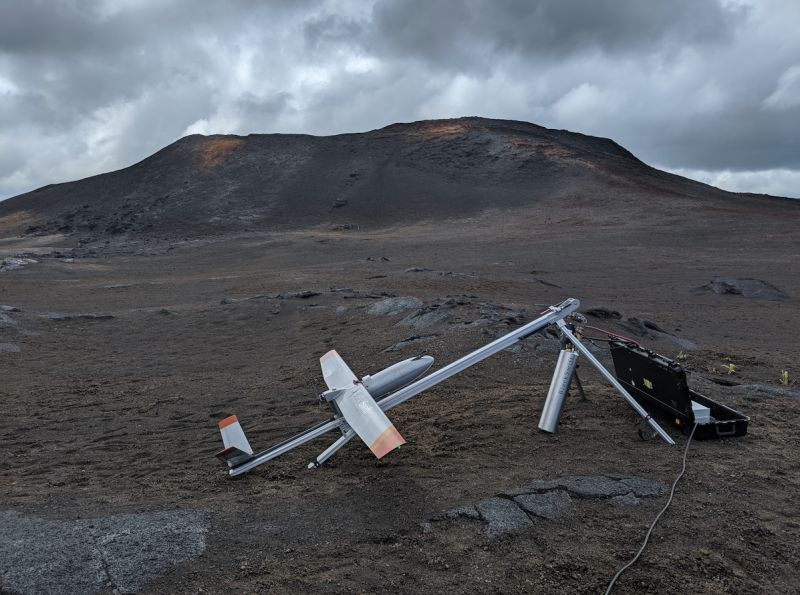 Now, BST is actively working on additional industrial use cases for its portfolio, one example being a collaboration with a company focusing on wind turbine inspections.

“They required a platform capable of performing highly accurate, up-close inspections of infrastructures, even in extreme environmental conditions,” Elston explained. “They purchased a number of vehicles that weren't purpose-built for their application and found none were able to operate and deliver the results they required.”

Their frustration and inability to find a suitable solution lead them to the team at BST.

From their inception, BST drones have been engineered to fly scientific payloads in demanding atmospheric environments (high-altitude, arctic, desert, corrosive particulates, and strong turbulence). Coupled with the company’s advanced end-to-end avionics, BST was able to engineer a solution specific for the wind turbine inspection application.

“Research and scientific applications push the envelope in several different ways,” Elston said. “For example, when you're operating in the Arctic in sub-zero conditions, icing is a reality and you have to be able to detect and mitigate that. A lot of thought goes into the design of our vehicles to help with those situations. For instance, you don't need any tools to assemble our aircraft, and if you have gloves on, you don't want to be taking those off to operate a screwdriver when it's really cold outside. The same is true with our touch base tablet interface which makes it a lot easier to program and control the aircraft while wearing gloves. These seem like little details, but for researchers operating in remote environments, they have proven to be key enablers to capturing the data they require.”

Additionally, the company is looking into developing more purpose-built drones for other types of commercial applications.

With the DOI grounding its drone fleet for non-critical events and the DOD’s stance against foreign-made drones, American-made solutions like those available from Black Swift Technologies have become a focus for many companies. In fact, Elston emphasizes that BST has, since the beginning, sourced a lot of its components from American companies. 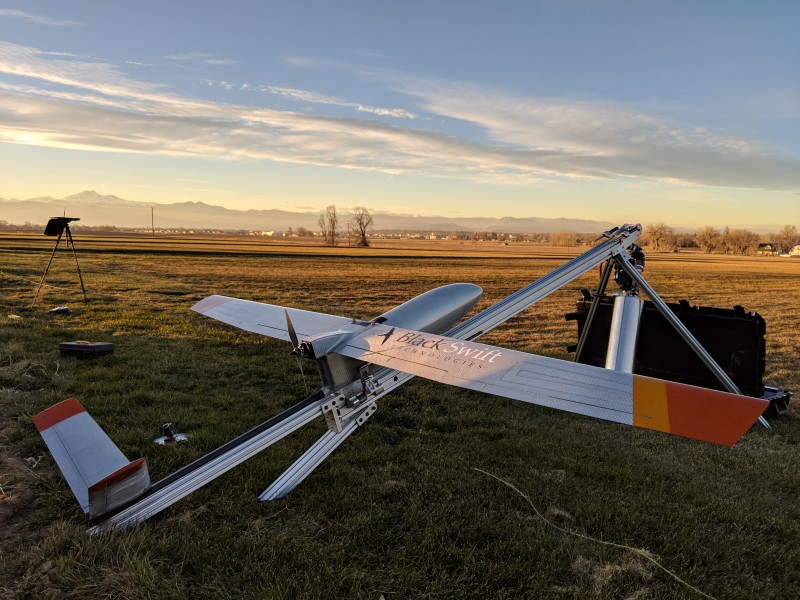 “Being a start-up in Colorado, we sourced a lot of our components from American companies because they were in the area. We could go talk to them, work through the designs, and point out specific requirements. That strategy continues as we take on more and more components that we design and develop locally. It takes a bit longer for us to find a vendor to work with that can deliver the level of quality that we require, but overall, it's been a pretty good experience. It's certainly been nice for quality control as what you get from overseas can be a bit of a mixed bag sometimes. Generally, once we find a good vendor in the United States, we find the quality of the product that we get is always something we can depend on.”

This summer, BST plans to add additional payloads to the E2 for both photogrammetry and real-time video feeds—both RGB, or EO and IR. Apart from the Venus project, which is still ongoing, the company is developing a new compact, yet rugged aircraft for NOAA to deploy into hurricanes to collect data and generate a better forecast for where it's going to make landfall and what energy it will have then.

On a more personal note, we asked Elston how the company got involved in developing a drone to assess the atmosphere of Venus.

“My postdoc research at CU was on tornadic thunderstorms. We had been flying around in these thunderstorms, but we needed to use electric aircraft because the emissions from a gas-powered aircraft would impact our measurements. Unfortunately, these aircraft are only able to achieve an hour flight time at most, and in order to characterize the evolution of these storms we needed more time. The choices were to employ sequential aircraft sequencing or figure out a way to extend the endurance of that aircraft,” Elston answered. “Given part of my analysis consisted of looking at the structure of the storm, I ended up proposing to use soaring techniques to harvest energy from the storm itself, similar to what various birds, like albatross, use to cross the ocean by gathering energy from wind. The thought was to employ the winds and shear, which can be quite strong in a thunderstorm, to extend our sampling mission 10 times the amount we could achieve on just a battery alone. We took a similar approach to flying on Venus, which also contains strong winds aloft. While the planet rotates very slowly, the atmosphere goes around the entire planet once every four Earth days. Put simply, there are hurricane-level winds within certain layers of the atmosphere above Venus. Based on what we understand from probe data and atmospheric models, this creates a good environment to support dynamic soaring techniques. Doing so, you make an aircraft that you can direct where you want it to go and sample the atmosphere, be it at different altitudes or latitudes, as opposed to a balloon that is constantly at the mercy of the winds.”