How Did the Hensel Phelps Construction Company Receive FAA Approval for Drone Operations Over People?

While Part 107 has enabled organizations to create and scale drone programs in powerful ways, the limitations around flights over people and beyond visual line of sight (BVLOS) operations have nonetheless limited how many of those same companies can apply the technology. In the construction industry, drones have given contractors unprecedented situational awareness of their job site and created immeasurable differences when it comes to safety, but the constraints of Part 107 have prevented many from unlocking the true power of the technology. One company has proven that they can sufficiently meet and exceed industry standards though, and that has allowed them to move beyond these regulatory limitations.

Recently, the FAA issued Hensel Phelps a Certificate of Waiver, allowing certified operators to safely fly parachute-equipped drones over people, including populated construction sites. These parachutes provided by ParaZero have allowed Hensel Phelps to deploy drone technology across their job sites while knowing they aren’t breaking any rules or regulations. Their approach will set a precedent for other organizations interested in pursuing similar operations, and the way in which they gained that approval is essential to understand. 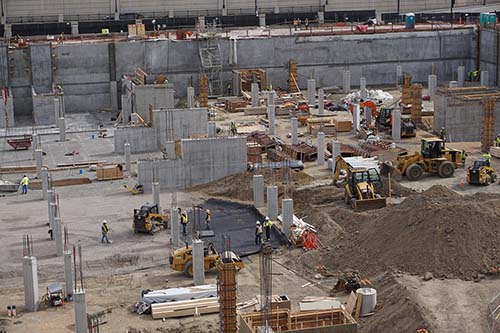 ‘Not Doing Anything Different’

Richard Lopez had led the implementation of new sUAS technology at Hensel Phelps for many years now. He worked through the logistical and regulatory hurdles associated with making a drone program work under Section 333, and has overseen the evolution of this program into something even more powerful under Part 107. For Lopez and for Hensel Phelps as a whole, mitigating risk is a top concern, and drones are ultimately just another tool they use to achieve this goal. The safety standards and approaches that were already in place at Hensel Phelps have guided their adoption process, and continue to influence how they utilize the technology with under the waiver.

“We're not doing anything different with this waiver,” Lopez explained. “If we can avoid flying over people, we will do it. The only thing this does is it allows us to make sure we're working within the rules and regulations of the FAA and conduct a drone mission at normal hours versus early morning/weekend/late afternoons. So we now have the opportunity to fly more while still adhering to the rules and regulations.”

The safety protocols that Hensel Phelps utilized and leveraged proved to be an essential part of the process. Their internal safety standards meet and often exceed what is required by law and OSHA, which is why they spend such an inordinate amount of time planning and preparing. All of that documentation coupled with the data ParaZero complied in their work with test sites and ASTM standards provided the company with a compelling safety case for the FAA.

Additionally, it’s important to remember that this didn't happen overnight. Their application evolved over the lifespan of the company, and it’s not something that anyone at Hensel Phelps takes lightly. Their focus on doing everything possible to mitigate risk is indicative of what it takes for the FAA to approve drone flights over people or anything beyond what is allowed under Part 107.

“With this waiver comes a greater sense of responsibility,” Lopez told Commercial UAV News. “The FAA is also assuming risk by approving this waiver. It’s our responsibility to ensure our drone missions are conducted with the highest levels of safety standards in place. I feel we are setting the tone, all eyes will be on us to see how we perform. It is up to us to not tarnish our names.”

That responsibility is one the entire drone industry has come to recognize and should be looking to emulate in numerous ways.

An Evolution for the Drone Industry

The fact that the FAA is on record as saying that this process to receive a waiver is scalable and available to other applicants who propose to use the same drone and parachute combination represents a major development for the industry. Many have criticized the FAA for not providing specifics regarding what is necessary to receive waiver approval, but this model is one that should provide definition around a concept that FAA officials have long talked about, which is around being provided a safety case.

“In my mind, this will open up the doors for a lot of companies, and it should bring hope to individuals,” Lopez continued. “We used industry standards as our starting place, and if there are individuals out there that can prove their protocols are meeting or exceeding similar industry standards, then there’s no telling how far or wide this can go.”

As ever, that focus on safety is something that proved to be the difference for Hensel Phelps. Officials from the FAA rarely go on record without mentioning their priority around safety above all else, and the fact that Hensel Phelps places that safety implication above even their bottom line undoubtedly influenced their approval.

For Lopez, one of the most telling aspects of this process was the request for information (RFI) that came back after their application was submitted on March 12. The only thing the FAA wanted to confirm was the company name. That told him they had provided everything the FAA was looking to see when it came to safety and standards, and sure enough, their waiver came through on June 3rd, less than three months after the application was submitted. It’s a timetable that is light speeds ahead of where the FAA used to be when it came to approving such applications, and also indicative of what’s possible for any individual or organization that is looking to receive a waiver when they’re building on drone applications or operations that have already been established.

“You look at companies like Intel, Verizon and Amazon that have been pursuing waivers like this for a long time, and you realize what a big deal this is,” Lopez said. “They have lobbyists and big, deep pockets, but we were approved first. That's pretty amazing and indicative of what can happen when you really commit to adopting this technology in a documented way that is safe and secure.”