3DR and Trimble Turn Hardware into Software to Democratize Precision

What it will mean to make drone technology boring is something 3DR CEO Chris Anderson has previously discussed, but today’s release of 3DR GCP defines that concept in an especially powerful way. The new Android app enabled by the Trimble® Catalyst™ on-demand Global Navigation Satellite System (GNSS) service makes it simpler than ever before for Site Scan users to capture and use ground control points (GCPs) on commercial drone projects. 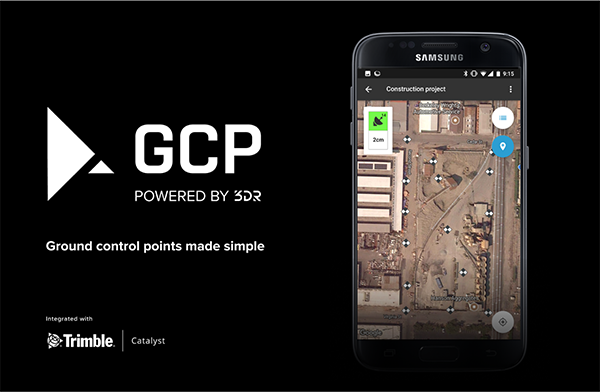 Using the app, 3DR customers can capture GCPs and automatically transfer them to the relevant project in the cloud for georeferencing and processing. This end-to-end, cloud-based ground control point workflow is as easy to use as it is powerful, allowing users across the world to create accurate, reliable drone maps and models. What’s especially critical to consider is how doing so can change users perspectives around the tools they can use to capture and utilize information on a construction site.“Whenever you turn hardware into software, you’re not just making it easier or cheaper, you’re also increasing the potential size of the user base, ” Anderson told Commercial UAV News. “Tasks that were being done by highly paid experts can now become commonplace. In this case, we’re democratizing precision. Why would you want to democratize precision? The answer is that if you can get more precision in more places, then everything gets better as a result.”When Anderson talks about everything getting better, he’s talking about the digitization of the entire construction process. BIM and scanning are part of that evolution, but the extension of the Internet to everything on a construction site is what’s really at the core of this process. By being connected to the Internet, things can be accomplished and fixed on account of this connection alone, and users don’t have to start from scratch for a given task or project.These kinds of automated features are at the core of 3DR GCP, since it automatically transfers GCPs to their corresponding projects in the Site Scan cloud. This sort of capability is about making scanning easier, but goes much deeper.“The original intention isn't about scanning sites once, but scanning them daily,” Anderson continued. “What automation allows is repetition and cadence. You can take something from an occasional task to a daily one that’s done automatically. We want the cost of scanning everyday to be zero. We want to enable the daily cadence of scanning without the loss of precision. Precision can come in the box.”That change in expectation directly speaks to the concept of making drones as ubiquitous as sprinklers, but ease of use will always be one of the top deciding factors in this kind of evolution. The number one barrier to any adoption is not cost or regulation, it's friction. It's process. It's people. The fact that 3DR GCP is one simple, connected workflow from start to finish will undoubtedly bring us further along on this path, but this is a case where the destination actually is more important than the journey itself. That’s because the destination is all about data.This concept is one that various experts are talking about, because to serious professionals, drones are just another means of gathering information. They might represent a better, cheaper or safer means to gather this information, but all of it is about getting to the point where stakeholders can have total information awareness. It’s an exciting concept that opens up countless possibilities.“If something can be an app, it will be,” Anderson said. “So what else on construction sites can be an app? We're just at the beginning of this, and once we get to the point where you can assume mobile on a site, then what? I don't know the answer to that. RTK looks like it can be replaced. Could total stations someday be replaced by mobile? It’s possible, and we’re already witnessing the replacement of low precision devices with mobile. It’s similar to the early days of the Internet, and you can compare the speed and networks we had then to now. You can see the foot in the door here.”How this development might impact expectations around the way in which precision can become something that every site does on a regular basis is an open question. For now, this development is enough for anyone that wants to use their phone to get info that would otherwise only be available via an exponentially more expensive RTK.3DR GCP can be purchased along with Site Scan subscriptions and will require a Trimble DA1 antenna and Catalyst subscription. To learn more about 3DR GCP, visit 3DR.com. To learn more about Trimble Catalyst, visit catalyst.trimble.com.