Debuted at INTERGEO 2019, Quantum-Systems’ Trinity 90+ has provided professionals in surveying and mapping with an easy-to-use, high-performance drone featuring one of the longest flight times in its class. To expand its wide range of payloads that include MicaSense’s Dual Camera System, the company has released a new geomatics grade, high-speed scanning lidar, the Qube 240. 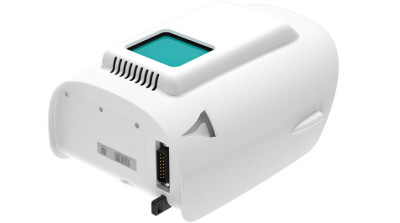 With a rate of 240,000 distance measurements per second, the Qube 240 generates accurate 3D images of the process environment with “outstanding absolute accuracy” from the integrated Applanix APX-15 UAV. The Qube 240 LiDAR sensor inherits the YellowScan’s Surveyor Ultra lidar scanner. This was the first integration into Quantum-Systems Tron UAS platform in 2017.

While one of Trinity F90+’s strong points is the 90-minute flight time, pairing it with the Qube 240 will bring this down to 60 minutes – but don’t get me wrong, it is still a lot! Additionally, Quantum Systems is selling the Qube 240 as a complete solution, which includes YellowScan CloudStation Software pack and license, allowing users to create and manipulate point cloud data out of the box.

“The Qube 240 convinces professionals with 240,000 shots per second, for which up to three reflections are measured,” Florian Seibel, CEO of Quantum-Systems, said. “The result impresses on one hand with an extremely high point density with 50-100 points per square meter, and on the other hand with very good penetration of the vegetation. This way, the creation of digital terrain models under forest is also possible without any problems.”

Although lidar technology is mostly known for being expensive, we have seen various companies trying to push the technology’s price down in the past few years. With that in mind, Quantum-Systems promises a cost reduction of over 50% - compared to its first integration of Yellowscan’s lidar in 2017 - due to the Qube 240’s smaller form factor, while still improving performance. According to Quantum Systems, this ensures that not only large enterprises but also SMEs have access to affordable technology.

“Impressive is the point density, even under vegetation and the low noise of the data. The sample data we collected so far also contains several GCPs, some of which were covered with snow or are on loose ground and were measured 2 years ago,” Martin Herkommer, Senior Sales Manager at Quantum-Systems, added. “Nevertheless, one can see the extremely high accuracy of the system. The balanced representation of the intensity values of the point cloud is also striking. These values are in any case better than the intensity values of comparable or even more expensive systems, like Velodyne PUK32 systems.”

With the first scanners coming to customers starting in March 2021, Quantum-Systems claims the Qube 240 is ideal for Power Line, Forestry & Agricultural, as well as Mobile surveying and mapping.