Iris Automation Enables BVLOS Operations for Drones in Kansas and Beyond

Since the implementation of Part 107 and the clarification of rules for Unmanned Aerial Vehicles (UAV) operations over the National Airspace (NAS), every legal drone flight has been conducted under a visual line of sight mandate in which the Pilot in Command (PIC) or dedicated observers keep the aircraft in sight at all times. However, many people throughout the drone industry believe that flights beyond visual line of sight (BVLOS) will enable countless mainstream applications of the technology that will truly transform the way we live.

BVLOS operations will do everything from enable the same-day delivery of goods to the automatic inspection of miles upon miles of infrastructure. That’s why the work that the Kansas Department Of Transportation (KDOT) is doing as a member of the FAA Integration Pilot Program (IPP) is so important, and why the news about KDOT receiving permission from the FAA to conduct the first-ever BVLOS drone operation in the nation leveraging only onboard detect-and-avoid systems was received with such enthusiasm. It’s another critical step in the effort to demonstrate that BVLOS flights are safe and can be integrated with manned aviation in controlled airspace. 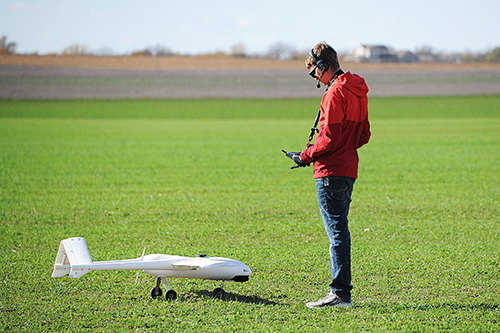 The result of a shared effort between Kansas State University Polytechnic Campus (K-State Polytechnic), Westar Energy, Iris Automation and KDOT, the Kansas IPP team will fly a nine-mile track to evaluate technologies to inspect power lines in rural Kansas. This approval is the first of its kind for long line linear infrastructure and is the first step to enabling routine commercial infrastructure inspections across the state.While the FAA has granted waivers to companies to conduct operations over people, this approval could do even more for the technology and industry as a whole. These opportunities are ultimately being driven by the collision avoidance technology developed by Iris Automation that allows a drone to see and avoid objects the same way a human pilot does.The California based company has specialized in the development of technology that mimics the way a pilot conducts a flight. While we’ve known these tools by names such as Detect and Avoid (DAA), Sense and Avoid (SAA) and many others, the bottom line is that the drone industry needs a system that will allow an unmanned aircraft get out of the way of incoming traffic the same way a piloted aircraft does. That’s the reason Iris Automation has been so focused on developing collision avoidance technology.“Iris Automation is building an AI-based collision avoidance system that helps drones see the world the same way pilots do,” said Alexander Harmsen, CEO of Iris Automation. “By enabling Unmanned Aircraft Systems (UAS) to fly Beyond-Visual-Line-of-Sight, Iris is the critical missing piece that takes commercial drone operations from theoretical to functional.”The Applied Aviation Research Center on the K-State Polytechnic Campus will be responsible for the training and flight operations with a cross-functional team from the KDOT IPP. Flights will take place over the next few months, providing the FAA with much-needed data on true BVLOS activity.“Our technology detects, tracks, identifies and classifies targets in a systematic manner while analyzing the trajectory and extrapolating where the target will be and the potential threat it poses to the aircraft,” Harmsen told Commercial UAV News. “It can also be plugged into the autopilot, and when the system determines there is a risk for collision, selects the appropriate avoidance maneuver to avoid a collision, the same way a pilot would.”This is the first UAV flight in history to leverage onboard sense-and-avoid systems alone for collision avoidance. It also marks the first required automated avoidance action. Historically, all FAA-issued Part 107 BVLOS waivers have required visual observers or ground-based radar. These mitigations limit the possibility of true BVLOS flights, as they are typically prohibitively expensive and limit operations to pre-defined corridor areas with radar coverage.“Flying rural missions like these without a human pilot onboard or costly radar on the ground is exponentially safer and more cost-effective,” Harmsen mentioned. “The FAA is trusting us to pave the way for a safer, scalable future together with this precedent-setting second approval of our system.”These upcoming flights should help pave the way for routine commercial infrastructure inspections across Kansas and beyond. As Harmsen said, their solution takes commercial drone operations from theoretical to functional and could further define how drones will create today and what it will look like for them to become a true piece of mainstream technology tomorrow.

Getting a Closer Look at Iris Automation’s Detect and Avoid System, Casia, in Light of the FAA’s New BVLOS ARC