It’s easier than ever to get a drone into the air to gather data of all types, but challenges arise when it comes to turning this data into valuable information like 3D smart maps. To help drone operators and enterprise stakeholders sort through these issues, Hivemapper has made it simple to create intelligent maps that can power drone applications focused on everything from autonomous delivery to managing construction projects to keeping cities running.

Designed for Oil and Gas, Disaster Management, Urban Planning, Logistics, and more, Hivemapper's solution provides users with machine vision mapping, visualization, and analytic tools to “uncover changes humans can’t see”. To achieve this, the company focuses on three major components: the Map, for analytics; Change Detection, to see changes in the map over time; and Object AI, the newest one, to help understand the map.

To store all the information collected from users, Hivemapper created Hivemapper Swarm, a cloud-based software service hosted and maintained by the company. This allows users anywhere around the world to build both public and private maps (depending on the subscription model) without worrying about any of the infrastructure. For companies who want to keep their data fully within their network, there’s Hivemapper Colony, an on-premises self-hosted platform that works with the company’s own hardware, cloud environment, or fully disconnected network.

A 75 second intro video to Hivemapper.

Building a map with Hivemapper’s web-based mapping platform comes down to uploading a video from any airborne collection platform including airplanes, drones, and helicopters to Hivemapper’s cloud, which automatically transforms it into a 3D map. Preloaded LIDAR data in Hivemapper improves the map accuracy to 30cm without the need for ground control points.

The platform features a set of tools to access, visualize, analyze, and share the maps built by users’ videos. Identifying the highest point in a city, determining visible and non-visible areas from a given location, and measuring slopes and distances between any two points are some of its features. It also provides contextual information, such as streets and points of interest, as well as hillshades and elevation contours. Additionally, users can click anywhere on the map to access all the videos from that location. By uploading GeoJSON and KML files, users can add new layers to the map.

Recently, the company open sourced a new project to set up and use Virtual Reality to immerse yourself in Hivemapper 3D maps for a whole new way of looking at the world.

According to Hivemapper’s blog post, video cameras, LIDAR, and radar sources generate 200,000 TB of data/day compared to only 300 TB/day from satellites. For humans, turning this into actionable data is time consuming, repetitive and tedious, which is why various companies are focusing on the use of automated Change Detection algorithms. These algorithms let the system capture “physical growth, loss, and disruptions faster than humans can.''

Contrary to typical Change Detection solutions, Hivemapper detects geometricchanges instead of pixel-by-pixel color changes - in other words, it does 3D Change Detection, not 2D. With this, detecting blocked roads after a hurricane, eroded terrain due to flooding or rain, or criminal activity of hiding illicit construction under tarps becomes easier, since 2D Change Detection can indicate several false-positives or fail to detect any changes in these situations. 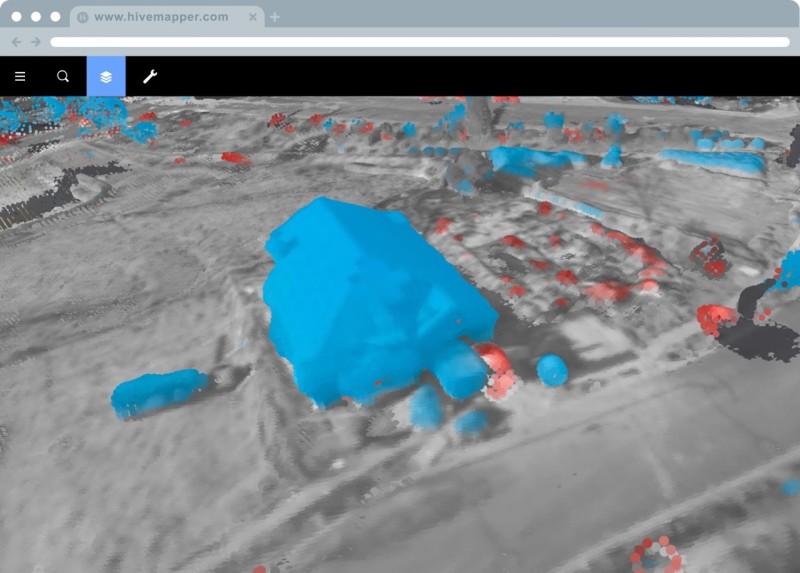 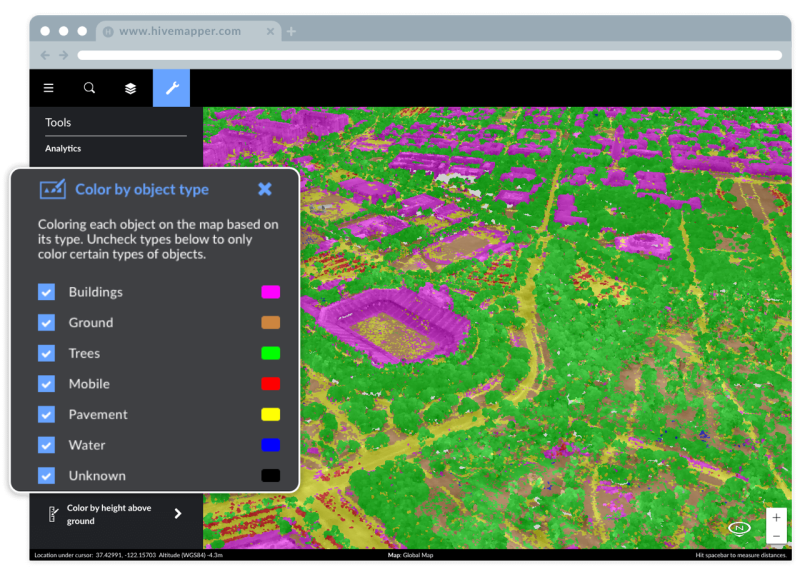 “Building a 3D map takes a ton of work and begins to unlock immense potential for our end-users, but we found that it still left them with a lot of manual work to get value out of the map itself,” Chittayong (Jao) Surakitbanharn, Hivemapper’s Product Marketing Manager, told Commercial UAV News. “Hivemapper's new Object AI is our jump into helping to solve that project. This capability allows for Hivemapper to automatically segment and label every 3D objects on the map.”

With a simple click of a button, Object AI allows users to visualize, filter, and analyze specific components of their generated 3D map including vehicles, structures, roads, vegetation, ground, and more. Hivemapper’s goal is to “help analysts quickly tell the difference between objects in their area of interest, which can span an entire city or hundreds of miles of pipeline or other infrastructure”. 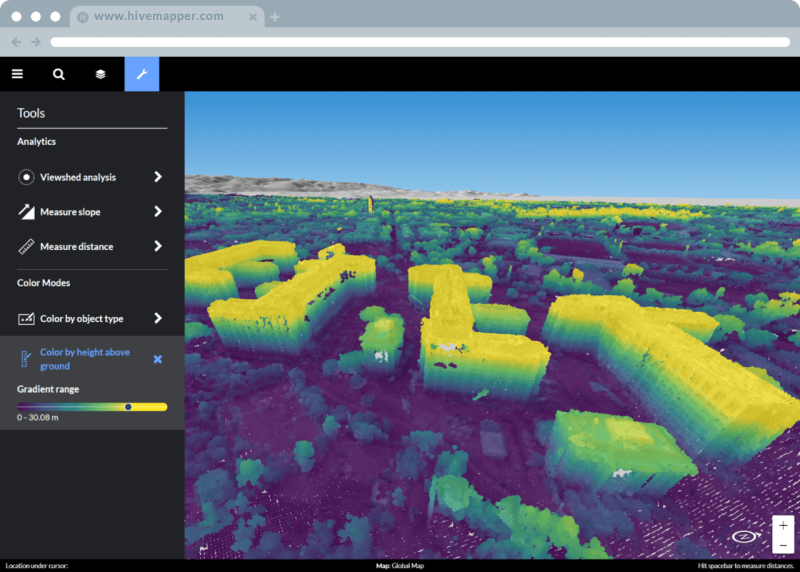 Hivemapper displaying the height above ground for autonomous navigation.

“This fundamentally changes the workflow for many of our clients since now analysts can spend more time focusing on understanding the interactions upon different objects in their map rather than the laborious task of identifying what the object is,” Jao continued. “Also, Object AI lays the groundwork for other features such as our ability to measure the height above the ground. Since we are able to identify what is ground, we can also indicate how high another object is from the ground. This is particularly useful for our clients who are mapping areas without a lot of 3D or high-resolution topographic data, which may be the case when attempting to navigate an autonomous drone to deliver a package in a remote region.”

Object AI allows users to be immediately alerted to regions where vegetation is changing in unexpected ways, unauthorized construction is being performed in a restricted region, land erosion has occurred due to recent rain, and more. For example, insurers can identify all at-risk structures and automobiles in a disaster-stricken area to provide the claims your customers need; or power line companies interested in vegetation encroachment can identify high-risk tree growth faster. Earlier this year, Hivemapper partnered with the US Air Force (USAF) to see if vehicles around the perimeter of Beale Air Force Base in California had moved or if new buildings were constructed near the base. According to Jao, the Oil and Gas industry can also take advantage of this technology to detect erosion and encroachments along pipeline right of ways.

“They want to be able to build a 3D map of their entire pipeline and/or power line network, map the right of way regions, and then use Object AI + Change Detection to have Hivemapper automatically alert a user to any concerning changes,” Jao mentioned.” Encroaching vegetation, terrain shift, unauthorized building construction, etc. are all relevant here.”

A tutorial for teaching the best drone flight patterns and camera settings for generating a 3D map.

At the beginning of 2020, the company will release Hivemapper Timeline to allow users to compare changes with more temporal granularity. Essentially, users will be able to compare changes between any two days, weeks, or months of a particular area faster.

“This is an extremely challenging engineering task since rather than having one 3D map with a collection of all the data in the area, we are developing a method to quickly store and extract from a series of 3D maps in the area,” Jao said. “For example, a drone delivery company or self-driving car company may want to know why their autonomous vehicle behaved differently, such as choosing a different route on Thursdays compared to every other day of the week. With Timeline, our clients can then compare the structures in the maps from every other day of the week to Thursdays and find out that there are always road closures for a farmer’s market or something of that sort. In a few years, this sort of application will be extremely critical when there is forward deployment to areas without pre-existing maps and data.”