On the second day of Commercial UAV Expo Europe in Amsterdam, I had the honor of moderating the surveying and mapping session. Three presenters with extensive knowledge of the subject along with years of experience in their respective fields offered the audience a sneak peek into the world of surveying and mapping and how drone applications and enhanced methodologies are being used to solve common problems with innovative ideas.First, we heard from Patrick Cunningham, from Blue Marble Geographics in the USA. He presented a real-life case in which his company assisted MFBI Technologies of Germany in the surveying of various sites to be used for truck stops throughout Germany. For centuries, Germany has been a crossroads between Western Europe and Eastern countries, and it was enlightening to see how technology is impacting this crossroad for the thousands of trucks that are crossing the continent and in need of infrastructure for fueling and resting.MFBI was hired to survey one of the sites for a future truck stop, and Marble Geographics helped them with mapping UAVs and the deployment of ground control points. They created a high accuracy 3D point cloud that would allow architects and engineers to perform the necessary site analysis and determine the best design.Next on the agenda was Daniel Scheiner, from Skyraider Aeronautics. He provided the audience with a comprehensive analysis of the damage caused by Hurricane Irma last fall to 3,000 acres of pecan crop in southwest Georgia. Skyraider was hired in an emergency after the storm went through the southern state. They were tasked with flying the fields and evaluating the damage. Daniel gave a painstaking account of the challenges of surveying a large and geographically disperse area with a multi-copter platform on very short notice.Daniel made a comprehensive analysis of the results of his multiple flights and complemented his conclusions by also comparing the number of damaged trees using three different methods to quantify the damage caused by the historic storm. 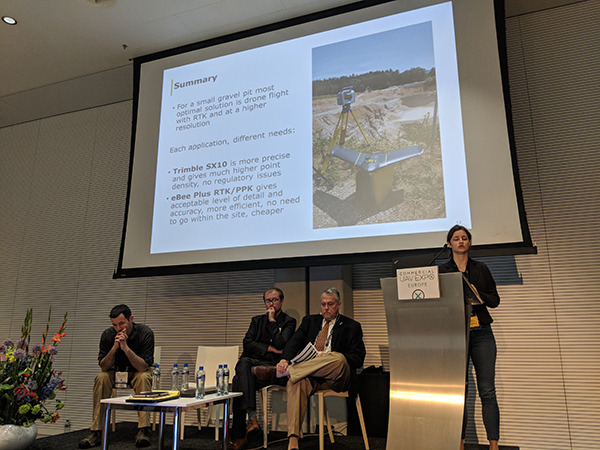 Then it was time for Ana Jesenicnik from senseFly, who provided attendees with a comprehensive comparison between the results of precision mapping of an open pit mine using both terrestrial laser scanner technology and UAV-based photogrammetry. The methodology used by Sensefly to perform both land surveying jobs was rigorous and the results were a big eye opener in terms of precision, costs, safety, time and a few other parameters.After Ana’s presentation, I opened the floor for questions. I tried to stir controversy by commenting that the 3,000 acres of pecan trees might have been a job more suitable for a manned photogrammetry aircraft, given the scale and large geographic span. Daniel took the microphone and explained to the attendees that perhaps 3,000 acres was the limit of what his multi-copters can cover in a reasonable amount of time, but also clarified that his methodology was a lot less costly and could be deployed in far less time than a manned platform, during a time of crisis.Patrick then elaborated on his methodology in determining an aerial platform for a specific job. Ana interceded to explain why they have used a fixed-wing aircraft in their study and the benefits in terms of flying time and the execution of a densification grid.Finally there were a couple of questions regarding shadow areas in surveying open pit mines with laser scanners and Ana explained that the typical configuration of the walls in an open site tends to create areas were the laser beam can’t reach and therefore a completely vertical view, as in the case of a UAV, was more suitable and also eliminated the need for humans to be inside the pit, potentially avoiding accidents.These examples and use cases demonstrated the value of the technology and how surveyors across Europe can and are leveraging it. The fragmented regulatory environment in Europe continues to impact where and how drones are being used by surveyors, but the regulatory update around when we'll see pan-European regulation helped explain when that might change. With that being the case, the examples referenced here are just the beginning of what it will mean for surveyors to use drones to make a variety of tasks faster, cheaper or safer.