Jim Warden, Applus+ Laboratories VP of Business Development for US and Canada

At the recent Commercial UAV Expo in Las Vegas, the Federal Aviation Administration (FAA) made important statements regarding the uncrewed industry. One specific announcement that was received by a round of applause at the plenary was the certification of the Matternet M2 drone, which marks the beginning of what we all hope will be a deluge of other brands’ certifications.

Another big announcement made during the event—but that went almost unnoticed—was the fact that the European Commission has appointed Applus+ Laboratories as Notified Body (NB) to assess the conformity of certain UAVs to enter the European market.

On Thursday September 8, the third day of the conference, I had the pleasure of sharing the Exhibition Floor Theater with Jim Warden, Business Development VP for the USA and Canada of Applus+ Laboratories, the North American subsidiary of Applus+ as we both made presentations. I was stunned to hear from Jim’s slides the news that Applus+ Laboratories are now able to review, test, and approve (if vehicle conditions and operational limitations are met) the entry of certain UAV models into the European market. So, after both our presentations were done, we sat down for a conversation about the implications of his announcement. 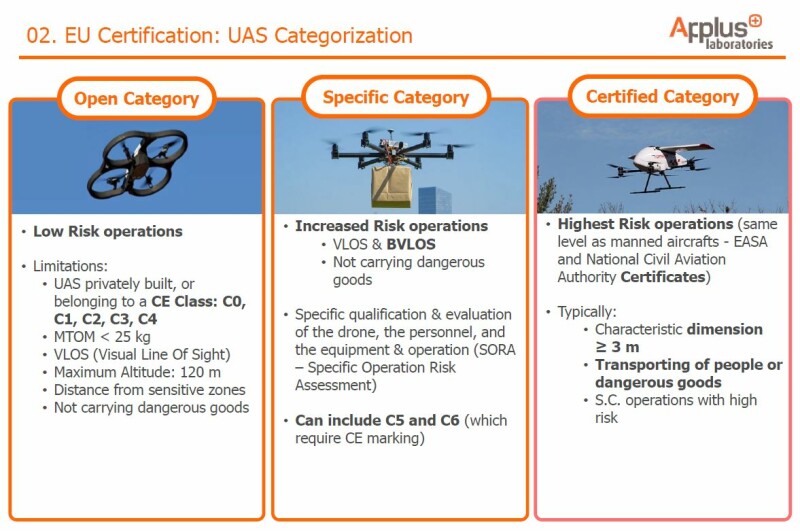 “Yes, it’s really something that the European Commission responsible for new entries to the market of products has given Applus+ Laboratories the opportunity to do this vetting of new unmanned aircraft models in accordance with the strict safety protocols laid down by EASA,” Jim said. “We are the world leaders in vehicle testing and as such we applied and got approved for this new class of aerial vehicles.”

Jim mentioned that he had a colleague in Spain that might be able to shed some more light in the important announcement, Davide Brandano, International Radio Type Approval (RTA) Director at Applus+ Laboratories, so we reached out to him too for more expert insight into the deal.

“It’s the equivalent to a Federal Communications Commission (FCC) approval in the USA but in Europe we, as a private company, has been given the responsibility to review and approve entry into the market.” Davide said. “Applus+ Laboratories, a global inspection, testing and certification company, is the first European company to be fully accredited to certify drones according to the new European Regulation (EU) 2019/945 and that’s a big step for the unmanned industry.”

Even though this outsourcing is not addressing type certification as the FAA understands it, is a clear indication that the European Union is open to delegate to private entities more and more of the responsibilities that would allow crewed and uncrewed aircraft to eventually share controlled airspace.

Warren Drone Program Can Now Actually Fly Above and Beyond