For decades, the Federal Aviation Administration (FAA) has regulated conventional, manned aviation to the point of exhaustion, but the results are the safest skies in the world. The last commercial airliner accident in the USA happened in 2009, and since then the industry has flown over 9 Billion passengers safely.

The FAA has accomplished this amazing safety record by working with manufacturers, private airlines and operators through a series of complicated and sometimes convoluted processes aimed at securing the reliability of the aircraft, the appropriate training of the crew and the strength of the ground support, also known as Air Traffic Control (ATC).

Now a new breed of aircraft is entering the scene and bringing with them new opportunities, but also new challenges. An Unmanned Aerial Vehicle (UAV) is by definition an aircraft without a pilot, but the fact that we don’t have a human on board doesn’t mean the vehicle is not a threat to people and property on the ground as well as to other aircraft sharing the sky.

That is why Part 107 and every other regulation covering the operation of UAVs clearly specify that these flights have to be conducted within the line of sight of the operator or the pilot in command (PIC). But, as with everything else in life, there are exceptions, and in this case the FAA has created a BVLOS (beyond visual line of sight) waiver.

This waiver process is a complicated maze of procedures and documentation that makes the entire process almost impossible to obtain without help. And here is where Iris Automation enters the scene with the launching of their Waiver Resource Center (WRC), which was created to help commercial operators expedite the issuing of BVLOS waivers fast, without having to try multiple times.

We had the opportunity to talk with Alex Harmsen, founder and CEO of Iris Automation, to better understand his company’s new product and how it fits into his overall strategy for the market.

“For the last few years, we at Iris Automation have been focused on providing our customers with the best detect and avoid system possible,” Harmsen said enthusiastically. “That effort brought us closer to the reality that most of our users want to have extended flight times and are preparing for a reality when BVLOS flights are a daily occurrence. We heard customers’ frustration over the FAA BVLOS waiver process and the many iterations that companies had to complete to receive an approval.”

Just by looking at the FAA website it is clear that the application process for any kind of Part 107 waiver is a complex set of documents and technical explanations that would make your head spin.

“What we did was to bring onboard aviation policy experts and asked them to create a process to expedite the creation of these documents and these technical explanations based on the information brought to us by the customer seeking the approval,” Harmsen explained. “The Waiver Resource Center is an online tool that manages the BVLOS waiver application process end-to-end for both Casia system customers and other organizations looking to fly BVLOS.” 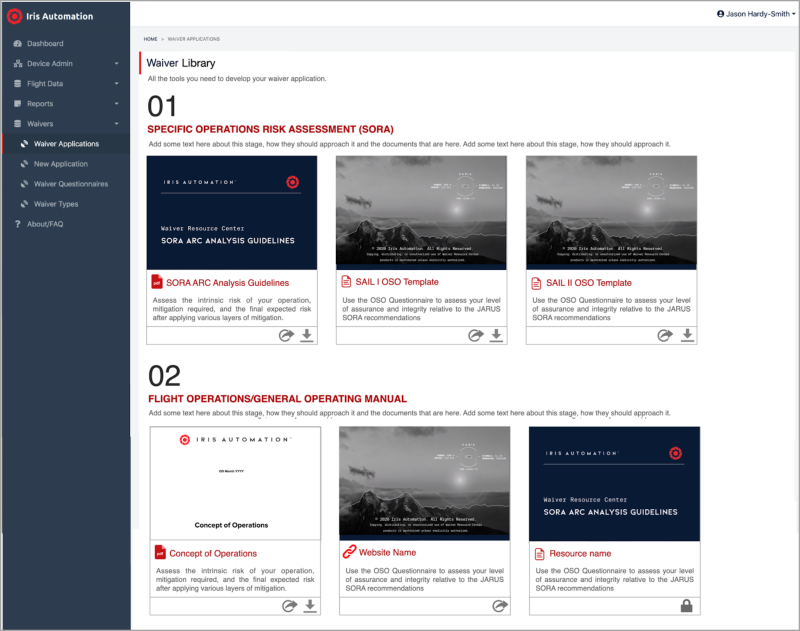 “The WRC has also proved to be an amazing educational tool for our customers, who have learned through the process how the system works and the kinds of rules and regulations that have to be met before we add their crafts to the safest national airspace in the world.” Concluded Harmsen.

The launching of this waiver tool by Iris Automation is a welcome addition to the existing arsenal of tools that commercial operators can use in an effort to execute missions longer and farther away than previously thought possible.