How Tethered Drones Are Revolutionizing Traffic Studies: A Case Study

The new light rail in this southwestern city was designed to make things better for its citizens. It promised to offer fast, safe, and reliable transportation from place to place, without red lights or traffic jams. And while it did achieve those goals, the municipality noticed that there was also an increase in pedestrian accidents. At specific spots along the light rail’s path, pedestrians were jumping the fence and getting injured.

What was causing these injuries? How had the light rail changed pedestrian traffic flow? Moreover, what could the city do to make the sidewalks and streets safer? To answer these questions, the city decided to embark on a comprehensive traffic study, using the power of tethered drones.

Traditionally, traffic studies require an enormous amount of time and manpower. This study would have required a massive team of up to 80 people, with eight people stationed at each of the intersections for hours on end, manually counting and tracking cars, pedestrians, bikes, and more. 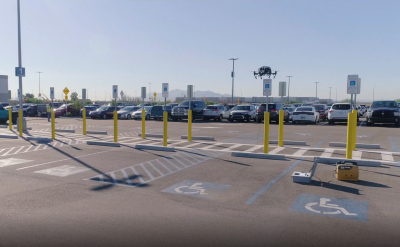 The engineering firm, AECOM Hunt, knew that drones offered a solution and hired Extreme Aerial Productions to study the light rail and learn about how pedestrians were using the crosswalks at six intersections. The goal? To learn why so many more pedestrians were involved in accidents involving vehicles since light rail was put in.

Tethered drone technology offers a far more efficient and accurate solution, with rich data and the ability to follow each pedestrian and track their movement from a bird’s (or drone’s) eye view. As Mark Taylor, CEO of Extreme Aerial explained, “without drone technology, you don’t have the whole story with full movement. You don’t see how vehicles affect each other.”

AECOM Hunt had requested a quick turnaround time for this project. Working for three days straight, Taylor and his pilots set up Yuneec H520e and DJI Inspire drones on tether using the Blue Vigil system. They sent a two-man team to set up each of the tethers and were able to complete the entire study, including analysis, in less than two weeks. (This would have taken XX days without the benefit of drone technology.) 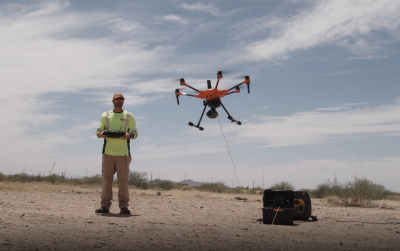 The Extreme Aerial team set up the cameras, monitored the footage in real-time and then transferred the entire raw data to the customer. In this case, Taylor delivered over three terabytes of data to the engineering firm, overnighting hard drives to the engineering firm each night after filming. Extreme Aerial also performed rich data analysis using Transoft’s proprietary software.

The data from the drone footage enabled the engineering firm to put together a comprehensive report filled with rich data showing how the light rail affected pedestrian safety and, in particular, the use of crosswalks. The study clearly showed that people were jay-walking and jumping guard rails at several places near light rail stops, even dangerously traversing 8-land highways.

Transsoft conducted AI analysis of the footage to learn how different factors affected pedestrian behavior, including time of day, where in the intersection people were crossing, types of vehicles involved in incidents and more.

Using this data, the engineering firm was able to recommend optimal solutions. The data gathered by the drones was used to help the firm propose solutions about how to prevent people from dangerously crossing intersections. According to Taylor, “they needed to decide what to design to stop people from entering ongoing traffic.

Taylor added that an additional benefit of the traffic study was that the municipality also learned more about commerce and safety in the area, how at-risk populations were using the space, and about the general traffic flow at these core city intersections. Thanks to advanced drone technology, several sections of the light rail have proposals for redesign to maximize the safety of this city’s drivers and citizens. 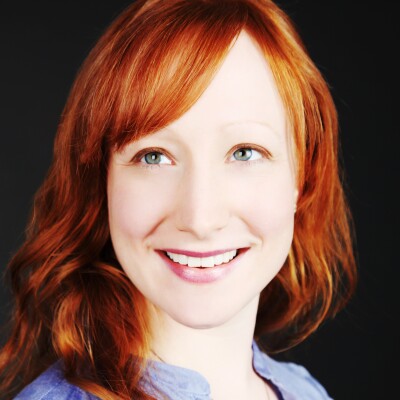 An expert in content marketing and SEO, Rachel Olstein Kaplan is the co-founder of Aurora Marketing LTD. She spent 8 years at Wix.com, first on the SEO team and then as the creator and Editor-in-Chief of the Wix Content Blog and a manager of the content team. She also helped market five Wix Super Bowl ad campaigns. Before her work in the world of marketing, she served as assistant director of Yahel-Israel, and designed and directed the extensive volunteer programs at the Agahozo Shalom Youth Village in Rwanda.

The Inevitable Merge of UAM and UAV: Part 2