Elistair and the Issue of Unlimited Flying Time for Drones

For those of you who follow this column, you are aware that my number one pet peeve with the unmanned aerial vehicles (UAVs) today, especially multicopters, is the average 25-minute flying time. I’ve always said that in order for this industry to get serious, in terms of commercial applications and mainstream adoption, flight time needs to be enough to complete a revenue-generating mission.

This unwavering quest for longer flying times and any companies willing to embark in their extension has brought to my life fascinating propositions such as Impossible Aerospace and Parallel Flight Technologies both founded by former Tesla executives and both driven by a mandate to extend current flight time into hours, not minutes.

A technology that has received less attention but has given the industry the possibility of longer flying missions for a long time, has been the tethered drone. Traditionally tethered drones have been designed and manufactured with a specific mission in mind and have been very popular with public safety organizations, where the need for long flight time in a relatively small area is required.

But these drones have normally been thought of in a way in which both the drone and the power base are designed together, to function as a unit.

But a French company, Elistair, has changed all of that by coming up with a power base that is designed to function with most commercially available brands of drones and provide hours of flight time on a 70 mt (230 ft) wire. 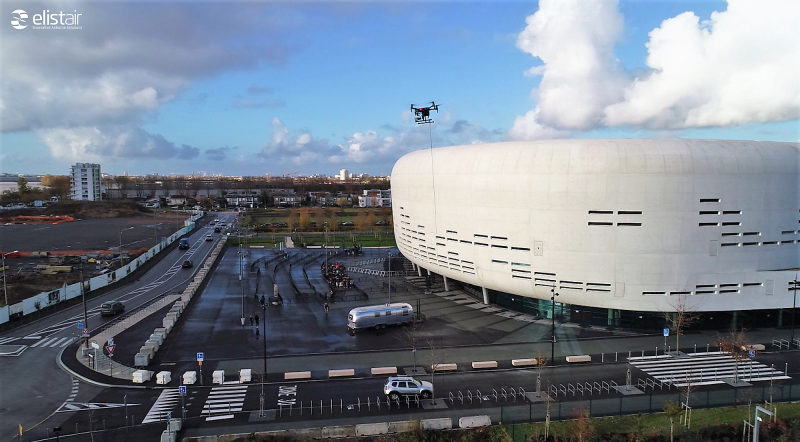 We had the opportunity to connect with Guilhem de Marliave, founder and CEO of Elistair on a range of topics, from pure technology to market focus and the future.

“Elistair is one of the leading tethered drone companies, with a strong focus on facilitating the access to unlimited aerial data to public and private entities,” Guilhem stated. “We have reached a global amount of 40K tethered flight hours in over 65+ countries, thanks to a field-proven and modular range of tethered products with industry-leading performances and multiple patents. With our large range of Air Module compatible with 50+ commercially available drones, our clients can easily tether their whole drone fleet with a single station. We are also offering secured datalinks and Software Development Kits for integration with vehicles and more complex robotic systems.”

When pressed about the specific markets that Elistair is focusing on, Guilhem was happy to elaborate.

“We are focused on helping governmental agencies and industrial groups to make better decisions thanks to unlimited aerial data,” said Guilhem. “Our main efforts are directed to help them protect people and assets when timing is critical.”

During the conversation, Guilhem informed us of a recent announcement of the release of the Safe-T 2.

“Since the launch of our first tethering station in 2015, Elistair has quickly become the industry leader in tethered drone systems, with over 600 tethered stations deployed so far helping security forces monitor events, secure sites and protect assets,” Guilhem explained. “The new Safe-T 2 has been built on the success of the flagship Safe-T product line, which has been deployed in over 60 countries by governmental organizations, industrial groups, and security forces. The Safe-T 2 will take tethering operations to a new level.”

For all those operations that require coverage of small areas and extremely long flying time a tethered solution is the answer. No wonder hundreds of fire departments and security forces around the world have opted for this alternative.

While we continue to look for similar flying times in unmanned aircraft that are not connected to the ground, it’s good to know that the alternative exists today for certain applications, especially when life and property are at stake.