AT&T’s 5G FLYING COW®—or “Cell on Wings”—is a system that uses drones to provide cellular coverage during large public events, disaster recovery operations, and other circumstances where signals are intermittent or weak. Tests have shown that the system can fly a drone up to 450 feet and transmit strong 5G coverage over some 10 square miles for days at a time.

According to Ethan Hunt, Unmanned Aircraft Systems (UAS) Principal Program Manager at AT&T, the concept is simple. “Basically, we attach cellular equipment to a drone, fly it up in the air, and it becomes a cell site,” he explained. “We put it up for additional capacity or additional coverage area when our normal network can’t handle a temporary need.”

Those “temporary needs” can cover a wide range of situations. Hunt reported that the system has been used to improve communications during large public events, like golf tournaments, but also during emergency situations such as recovery operations following 2017’s Hurricane Maria in Puerto Rico. In these situations, the Flying COW allows first responders and search-and rescue personnel using a 5G phone to go from having no service to fast wireless connections in seconds, which enables streaming video and improves command and control. 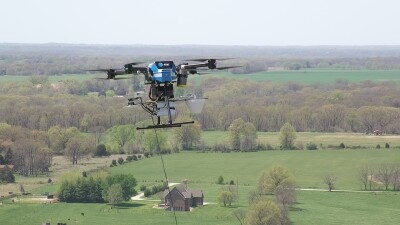 “We can take the drones places that we cannot put our people,” he stated. “So, for example, if you're going down a ravine or deploying in a wildfire, we definitely don't want to put our people in those situations. This technology gives us a way to have the information we need without actually putting our employees in harm's way.”

Central to the Flying COW concept is a tethered drone system. “We use a drone that weighs up to 55 pounds with payload, which lets us operate under Part 107, and it lets us put up two carriers of either LTE or 5G on the drone,” explained Hunt.

Additionally, Hunt reported, “the drone is tethered to the ground with power and fiber, which lets us keep it in the air 24 hours a day, up to 16 days, theoretically.”

Through the tether, Hunt said, “we send up about 5,000 Watts at about 450 volts, so we can send it up at a lower amperage and use a thinner power cable to get the power up there.” The tethered system not only facilitates the powering of the drone, but it also enables flight systems management and data collection, he stated.

Hunt said the Flying COW system works well in hard-to-reach places and wide-open spaces. “By taking the radio equipment and the antennas higher in the air, we can more closely match where our antennas are for our macro network—our normal network—and it gives us the ability to cover down into ravines and valleys a little bit easier,” he said. “It also gives us a larger coverage area in flat terrain because it lets us get over all the clutter that will block a signal like buildings and trees and things of that nature.”

Despite the technology’s ability to improve coverage in rural and remote environments, Hunt said that the Flying COW is most often used in more dense and populated areas. “Most of our deployments are actually in urban and suburban environments,” he stated. “For disaster recovery, we'll go wherever we're needed to have a cell site. For example, in Puerto Rico after Hurricane Maria, we were in the parking lot of a strip mall with houses all around us.”

The Flying COW has also been deployed in other population-dense—but less stressful—situations such as golf tournaments and other large public events. “We’ve done parades in St. Louis where we set up in the parking lot of a church in a residential area with tens of thousands of people out in the street,” Hunt said. “In situations like these, we have to make sure that where we deploy, we can deploy safely, and typically we're able to find a location that meets the needs.”

Hunt also reported that the Flying COW has been integrated into the FirstNet system, a high-speed, nationwide wireless broadband network aimed at improving communications for first responders and other public safety professionals.

“FirstNet gives first responders and frontline medical professionals their own network,” explained Hunt. “It’s an express lane during an emergency so that they have the communications that they need.”

Hunt said that AT&T’s disaster recovery team manages drone deployments for FirstNet. “This has been a very successful partnership,” he stated, “and I think it will expand and improve in the years to come.”