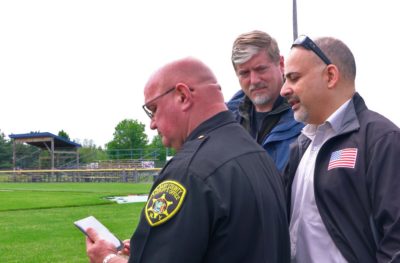 The tests took place in late May at the New York UAS Test Site located at Griffiss International Airport in Rome, N.Y., where NUAIR staff assessed the system against draft industry standards. The testing was also reviewed by Oneida County Sherriff’s Office personnel.

The tests were ultimately considered a success, said Amit Ganjoo, the founder and CEO of ANRA.

“We’ve been talking about this for a long time and Remote ID is obviously one of the key issues holding back the entire industry right now,” said Ganjoo. “There are lots of folks working on proprietary solutions, but not a lot of work was being done to move the whole industry forward — little work has been done to push the needle forward. We’re hoping this helps do that.”

“The display applications ingested broadcast RID data and/or interacted with a network RID display provider to present information to the end users,” explained ANRA’s Brent Klavon in a blog post following the tests. “The broadcasting drones transmitted RID advertisements continuously and a Display App on a smartphone used the smartphone’s technology to listen for the drone advertisements, extracted the RID data, and then displayed the live drone location on a map along with its historical path.”

ANRA and Doodle Labs have also announced a decision to open-source the broadcast-based remote ID firmware, which can be used for any Linux-compatible Wi-Fi hardware module.

“What we did in this demonstration is prove that both broadcast and network capability are important and can work together,” Ganjoo told Commercial UAV News. “We believe both are required to make Remote ID guidelines a reality and you can’t just do one without the other.”

The FAA recently decided to push back its remote identification ruling for drones from July to September. Despite the delay, Ganjoo was excited about the results of the testing and said the feedback they received from NUAIR and local law enforcement was extremely valuable.

“This is our way to see how we can push the boundary, making this a standard so the whole industry can move forward,” he said.

While the tests prove that the issue can be fixed technically, it was eye-opening to discuss how the system could enter an operational environment.

“Some of the feedback from local law enforcement was, 'What are we supposed to do with this?'" Ganjoo continued. “There’s no system in place to deal with it. Who is taking these calls? Who is doing the training? What actually happens when an unauthorized drone is spotted? That’s the next step. Like the rulemaking process, integration won’t happen overnight. It’s going to be a long process.”