“Everything in a mine can kill you.”

That’s what Matt Mackinnon, founder of Unmanned Aerial Services Inc., told me the night before my first time going into a mine.

And it wasn’t just any mine. The next morning, I was going to accompany Matt and his head UAV pilot, Geoff Helluin, into the deepest mine on the planet—the Kidd Mine. Also with us was Johan Mlouka, Flyability’s Managing Director of North and Latin America.

The Kidd Mine is located in Timmins, Canada, a small mining town in the northeastern outskirts of Ontario. I should clarify that it’s the deepest as measured from sea level—that is, it goes the farthest into the ground of any mine. (There are mines in South Africa that start above sea level and measure a greater length, but none that get as close to the center of the earth as the Kidd Mine.)

Unmanned Aerial Services Inc. is one of the leading drone service providers for the mining industry. Over the last several years, they have developed proprietary methods for using drones to collect data in mines that help dramatically increase safety for mining operations, while also helping recoup significant savings.

We were going to the Kidd Mine to conduct tests with one of Flyability’s indoor drones, as well as a DJI Matrice 210 equipped with a LiDAR sensor. The goal was to see how the drones performed and what kind of data they could collect in a real mining environment.

“But don’t worry,” Matt added, dipping a piece of bread into a ramekin filled to the brim with artichoke dip. “We’ll keep you safe.”

If all of this sounds ominous, the truth is that I was naively calm about the prospect of riding in a vertical shaft thousands of feet into the ground the following day. When it comes to safety, I figured mining operations were a binary—if you were allowed to go into an area, that’s because it was safe, and if you weren’t allowed in, that’s because it wasn’t safe.

But the truth, as I learned the next day, is a little more complicated than that.

Safety in mining has progressed a tremendous amount over the last several decades. But even with cutting technology and excellent practices in place, safety is still a constant consideration in mining operations. And this is why you have to use specific mining equipment and wear specific PPE (Personal Protective Equipment) in order to enter a mine. For my mission at the Kidd Mine, this equipment included:

One of the biggest safety risks in a mine is getting hit by falling debris. To prevent falling debris, the areas where people work inside mines are typically reinforced using spray-on concrete called shotcrete and wire mesh/screen.

Areas that aren’t reinforced, called unsupported ground areas, are typically made very clear, so that people can avoid going into them. In the picture above, crossing the line that reads “Restricted Entry” would most likely mean going into an unstable, unprotected area, where pieces of rock and debris could fall from the back (ceiling) at any moment.

It is almost impossible to know what the conditions are inside an unstable area in a mine.

But using a drone, you can fly into these areas and collect crucial data that can inform safety decisions, and also help identify remaining ore. 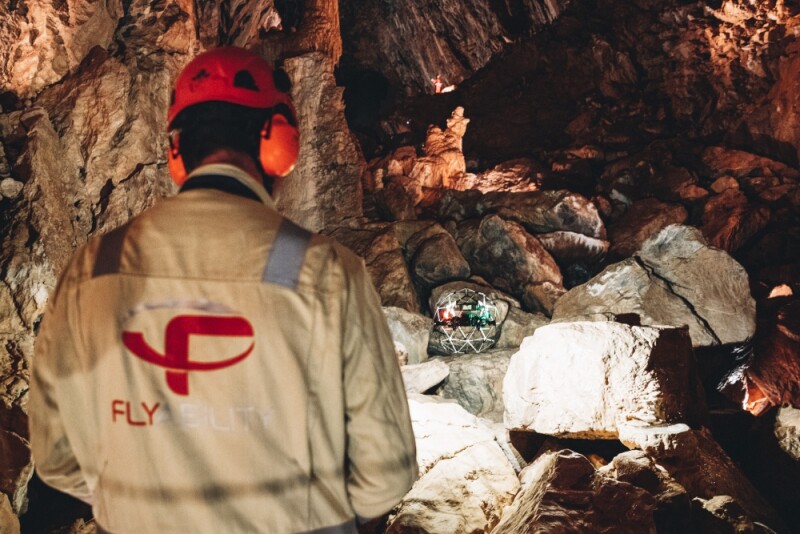 The main types of data collected by drone in mining are visual data (pictures and video) and LiDAR data (data that can be used to create maps of an area). Visual data can provide immediate insights into how safe a section of a mine is to enter.

In Timmins, Geoff Helluin of Unmanned Aerial Services Inc. described a time when a section of a mine had flooded, and it was hard to tell how deep the water was and how far back the flooding had penetrated. Using Flyability’s Elios 2, he was able to fly along the surface of the water, following the flood deep into the recesses of the mine so that he could tell how safe it was to go back there.

Here’s a 3D model of a stope (the name for an excavation from which ore is extracted) using LiDAR data collected by drone. 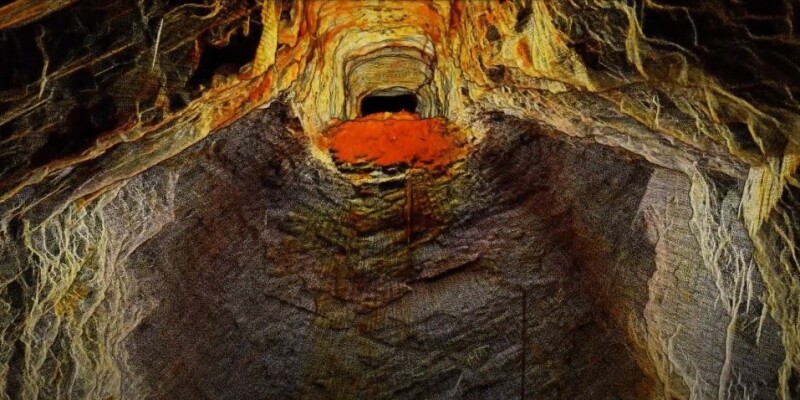 (Click here to watch a video of a 3D model of a stope made with LiDAR data.)

More and more, mining operations are turning to drones equipped with LiDAR sensors to create 3D models. LiDAR can provide real-time mapping, allowing mining personnel to get immediate data on the conditions inside of unstable areas. This data can then be processed later using 3D mapping software to create a detailed digital twin of the area.

Both the real-time situational awareness and the detailed 3D models enabled by LiDAR help mining operations improve safety by providing crucial information on the conditions inside unstable areas they could not otherwise collect.

Using drones, miners can get immediate information to inform key decisions about stability and other conditions, increasing the overall safety of the operation.

As industry leaders like Unmanned Aerial Services Inc. continue to demonstrate how impactful drones can be for mining work, we’re sure to see more and more mining operations adopt drone technology to inform safety decisions and improve their daily work.

Zacc Dukowitz has been reporting on the drone industry since 2016, when he began writing for UAV Coach. He currently works as Flyability's Content Marketing Manager, where he writes case studies, articles, press releases, and in-depth guides about drones and NDT inspection methods, as well as heading up Flyability's ongoing webinar efforts. Zacc continues to write for UAV Coach, where he reports weekly on breaking news in the industry.