In late November, a consortium of American and Canadian companies and organizations announced the signing of a memorandum of understanding to create an electric Advanced Air Mobility (AAM) corridor between the province of Québec and Syracuse Hancock International Airport in New York. The corridor—the first of its kind to operate internationally—will provide a platform for transporting commercial cargo and people using electric vertical take-off and landing (eVTOL) aircraft.

According to NUAIR CEO Ken Stewart, the project builds on multiple efforts in the US and Canada to integrate AAM into the airspace.

“NUAIR and other groups are focused on eVTOL aircraft, but we lack the necessary infrastructure for these vehicles and how to integrate them with current air traffic management systems,” he explained.To address these issues, NUAIR is drawing on its experience from the last decade of developing New York’s 50-mile uncrewed aircraft systems (UAS) corridor and conducting a multitude of advanced UAS projects at the New York UAS Test Site. Recently the New York UAS Test Site, managed by NUAIR, received authority from the FAA to fly uncrewed aircraft beyond visual line of sight (BVLOS) for the full 50-miles of airspace between Syracuse Hancock and Griffiss International Airport in Rome, NY. 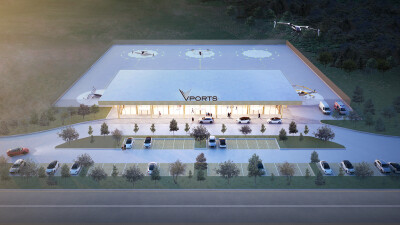 “All of the technological testing, airspace integration projects, and infrastructure development that we've conducted in our 50-mile UAS corridor we're applying towards this international AAM project,” Stewart reported. “We’ll be flying at higher altitudes and further distances than we have with UAS, but our operational experience with UAS will help us advance AAM operations.”

Regional airports have excess capacity, and one intent of the New York-Québec corridor is to help open new revenue streams for these airports. “NASA put out a report that said 5,000 airports in the US are available for public use, but only 30 of the airports serve over 70% of the travelers,” Stewart said. Integrating eVTOL vehicles at these airports, Stewart believes, would increase their capacity for moving cargo and people, generating significant revenue and strengthening supply chains.

“Last year, New York shipped $1.3 trillion worth of goods across the state, and 70% of it was by truck,” Stewart said. “Over the past few years, we’ve seen more people move from large cities to more rural areas, requiring more trucks to bring them goods, and unfortunately, we have a national shortage of truck drivers. Integrating uncrewed aircraft to augment the cargo transportation supply chain would make a huge impact not only in assuring the timely delivery of goods, but also ecologically, reducing greenhouse gas emissions by using eVTOL aircraft.”

Stewart said that there is no firm timetable for when the New York-Québec corridor will be up and running, but project meetings are already underway, and he sees real enthusiasm for the project. “Obviously, there are regulatory and infrastructure issues to work through, but from an economic, security, and safety perspective, we all know how important this project is,” he said. “We’re going to keep pushing forward.”

Will Voice Commands Play a Role in the Deployment of Drones and Air Taxis?

Will Voice Commands Play a Role in the Deployment of Drones and Air Taxis?